How can I complain about men staring at me when I’m not wearing my dupatta? 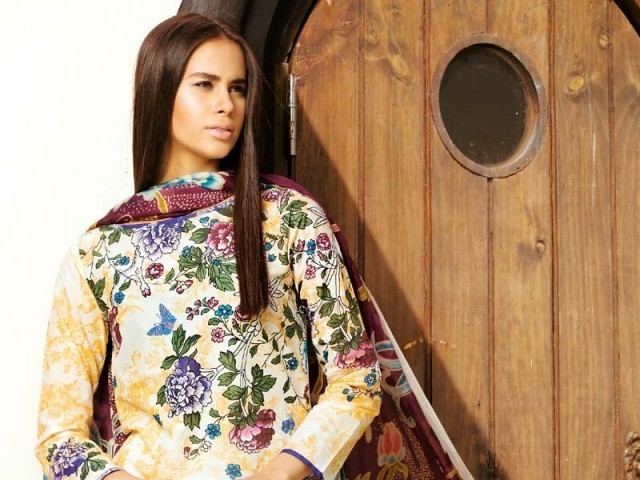 This is the main reason all designers are still promoting three piece suits and have not yet compromised with the length or breadth of a dupatta. PHOTO: PUBLICITY

This takes me back to a cherished childhood memory. My twin sister and I would use Ammi’s dupattas and sing this song, while dancing clumsily on our spacious terrace, as the dupattas flew behind us in the air.

A dupatta was once considered as an integral part of our dress code, specifically in the Indo-Pak subcontinent. The long, flowing scarves covered the women’s hair and chest, and were considered as a symbol of femininity. It used to differentiate our women from those belonging to the western society.

Unfortunately, over the decades, the influx of foreign influence, along with the general misconception of women empowerment, has made our women abandon these beautiful scarves from their attire.

It is a common sight to see women dressed in shirts (kameez) with shalwar, trouser, tights or cigarette pants, with no sign of a dupatta. I personally feel that their outfit looks incomplete, as if they have forgotten an important part of their clothing at home. A dupatta adds grace, charm and beauty to a woman’s look and is in no way a hindrance or hassle for her.

After years of hesitation, I finally decided to write on this controversial issue. In order to do so, I felt that taking the views of today’s young girls would be appropriate.

Considering my age, anyone can easily accuse me of doling out unnecessary, aunty-like advice which does not go with the requirements of our so-called progressive society. I personally know the two girls who have given their opinions, they are highly educated professionals.

Quratulain Ahmed, an entrepreneur, (also the chief motivator behind this writing), speaks her mind with clarity.

“Belonging to a conservative Urdu speaking family, I was not even allowed to wear jeans to college. Shalwar kameez was the only outfit which my sisters and I could wear once we outgrew our teens. Wearing a dupatta was a must for us. For four years, I went to a liberal arts college managing a dupatta with my art materials. But gone are those days. Dupattas are now considered out of fashion, hence women have stopped wearing them.”

Zehra Awan, who has recently completed her ACCA and works with a reputed accountancy firm, says,

“Before giving my views on the disappearance of dupattas from the female apparel these days, I would like to mention that I was also one of those so-called modern girls, who had stopped wearing a dupatta. For some reason, I thought wearing a dupatta was a hassle and a hindrance to my movement, whether I was at work or in a social gathering. Then with time, one day I realised how inappropriate it was to go out without a dupatta. It did not take me long to realise that I felt much better when I wore it with my outfit, as I felt safer from unnecessarily prying eyes. It also encouraged me to pray regularly. Although I am not claiming that wearing a dupatta has made me religious, or a better person. Nor has it clarified the rights and wrongs in my mind. However, it has changed me through my female conscience as it gives me a sense of security when I step out of my house.”

“Western influences in our culture have crept in slowly over the decades, and sadly it is now acceptable to see a Muslim woman without a dupatta, in a sleeveless dress in public places, social gatherings and on the television.

I would like to ask, where are we headed next?

Our media is portraying the Pakistani women as so-called modern individuals. I would like to tell them that getting rid of an important part of your outfit empowers you in no way! If a woman feels that not wearing a dupatta gives her a sense of belonging and makes her look chic, then she is headed in the wrong direction. If this mind-set continues, I fear that those who wear this graceful attire will be termed as backward or conservative.”

Zehra adds in her opinion:

“I do not want to pass stereotypical comments, like a girl is shameless for moving in public without a dupatta, or that her parents have failed to instil our cultural values in her mind and worse of all, no decent man will ever marry her. A person’s character, family background or values are not for me to judge. I am not sharing my views to mock or ridicule any woman who does not wear a dupatta. You can be covered in a burqa, yet the girl next to you wearing tight jeans and a sleeveless top may be a better person. Your personality and character is yours, something between you and your Creator, not something to be judged by your clothing.

I want to confess that I find myself actually looking better, more lady-like when I wear a dupatta. I now feel that it’s an essential piece which completes a female’s outfit. Sometimes I wonder why I completely stopped wearing it in the first place. I find that there is no fashion that I fail to meet while wearing a dupatta. Moreover, I feel more secure when I move in public.

How can I complain of a man staring at me in bazaars or on the roadside, if I have left my attire incomplete?

A woman’s beauty is not in revelation; it is in what she keeps hidden from the world.”

Therefore, in conclusion, I just want to convince women that discarding your dupatta is not a status symbol, nor does it prove that you are highly qualified, progressive or liberal. It is only a matter of confused conception of what is modern and chic. I would like to request women who have abandoned dupattas, whether it is due to peer pressure or misguided desire of being called progressive, to promote your own culture instead of a foreign one.

Dupattas may not be ‘in’ for some women these days, but they are definitely not ‘out’ for others. This is the main reason all designers are still promoting three piece suits and have not yet compromised with the length or breadth of a dupatta. I firmly believe that dupattas are an inevitable part of our cultural dress code and will not be blown away with the wind, come what may!

The author is a home maker and a part time writer. She loves to write (both prose and poetry) on diverse subjects. She tweets @YasminElahi (twitter.com/YasminElahi) and blogs at yasminelahi.wordpress.com