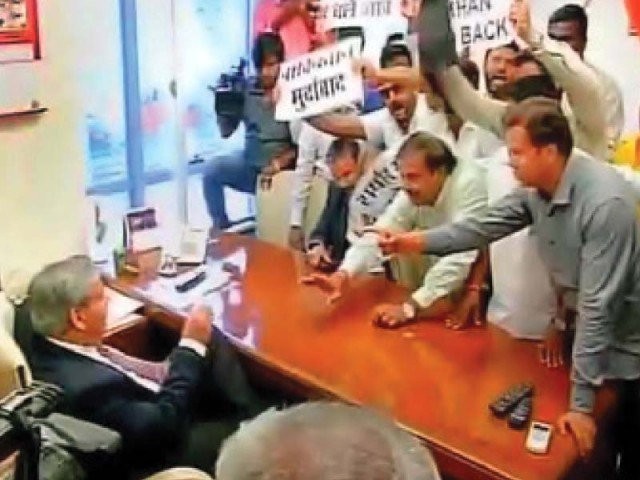 We live in a time where our very existence is offensive to some people. It is hard to imagine how much cricket has been used as a weapon for political folly. It is absolutely outrageous that our team is in constant limbo, adjusting to whatever catastrophe will hit them next.

Perhaps we are sensitive people, maybe our history has taught us the art of playing victim, but there is a general feeling of resentment underlying Pakistan cricket, a sense that we are treated like second-class citizens, a complete double standard when it comes to anything Pakistan related and the deafening silence from the outside world is only perpetuating it. Perhaps we are wrong, the harm we have inflicted on ourselves has been more lethal than any attack from exterior forces but the pain is all the same.

Earlier when Australia cancelled their tour of Bangladesh, it was because their safety had to be put first. We had scores of self-proclaimed gurus on Twitter claiming there is nothing heroic about putting your life on the line to play a sport and the Australians were justified in their actions.

#Australia has right right to cancel Bangladesh tour. Because "security is the first priority". ;) #BANvsAUS

India, Pakistan and South Africa had all toured in the months before that. The World T20, the Asia Cup and the Bangladesh Premiere League (BPL) have all been held in recent times without a blip, but this non-specific threat was enough to cancel on the eve of the departure and not a single question needed to be raised.

In the same breath, you have the Shiv Sena in India causing absolute mayhem, threatening an International Cricket Council (ICC) official Aleem Dar, Pakistan Cricket Board (PCB) Chairman, Shahryar Khan and Najam Sethi sealed in their hotel for security reasons, Wasim Akram and Shoaib Akthar unable to commentate, Pakistani artists being forced to cancel events and an immense hatred for the country and anything and everything associated with it.

That is not to say that all of India feels this way, it is impossible to generalise and believe that the actions of a few reflect the sentiments of 1.2 billion souls. If only the rest of the world didn’t think we are all hiding in our bomb shelters and funding lunatics.

The ICC has decided that given the cash cow the Board of Control for Cricket in India (BCCI) is, they could not take the World T20 away from India, after all, it is only Pakistan who is at stake. Instead, our players who are under serious attack will simply not play in the state of Maharashtra. There you have it, problem brilliantly solved. If the Shiv Sena is attacking Pakistanis, simply remove them from the equation. The deafening silence from both the ICC and the BCCI is enough to make one question the very foundation of the cricketing world.

What is this dictatorship? If a team feels threatened in a country, how can you expect them to play, but if the roles were reversed there would be outrage? Given all the power the BCCI now has, the rest of the playing nations are simply ostriches, afraid to ruffle any feathers in fear of the mighty Indian wrath.

On  June 26, 2014, the headlines roared about how India and Pakistan, under the leadership of then chairman Najam Sethi, had a binding agreement with India; six tours between the years 2015-2023 which had been sketched into the Future Tours Programme for both teams. Pakistan was also apparently said to be given the fourth largest share of revenue after the Big Three, allowing us to believe we had some say in the ruling of the cricket world. As it stands, the situation has reached new levels of low with intolerance rampant on both sides of the border and cricket and its avid followers are the ones to suffer.

You have the ministry and heads of the BCCI claiming that they will not play cricket with Pakistan because the country is harbouring certain terrorists? Is this what cricket has now been reduced to, a bargaining tool for a political agenda?

On the flip side, the chief executive of the PCB is desperate for some cricketing ties with India, realising the importance of their presence in the sport. With the Pakistan Super League (PSL) on the rise, he’s open to the idea of having Indian players on board; perhaps that sentiment might have changed after recent events.

It is pertinent to also point out that earlier this year, during the Indian Premiere League (IPL), Sri Lankan players were not able to play any matches in Chennai so perhaps the threat looms for nations as a whole and not one specific neighbour.

There was little talk, even less ridicule and a simple sense of acceptance, that’s just how it was. As Pakistanis, we’re used to this every single year (again playing victim of course), we are all too familiar with the depression that sinks in when IPL season is on.

These are dark times for Pakistan cricket. It’s a hard time to be a fan no matter where you live in the world. The sport is slowly being wrought with the sort of red tape and governance that takes away from the magic. It’s going to be a wonder how Pakistan will manage to play any games at all at the World T20. If we boycott the World Cup, it is only our team that will suffer. The time is now for the ICC to create a standard policy for the security of all playing nations around the world and yes dare I say, one that includes the nuisance that is Pakistan.