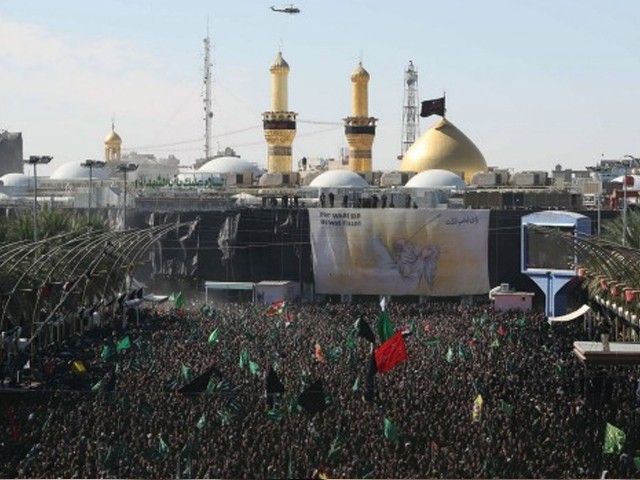 Iraqi Shiite Muslims gather outside the shrine of Imam Hussein in the Iraqi city of Karbala. PHOTO: AFP

With the Islamic month of Muharram upon us, I wanted to take the opportunity to implore Muslims (and whomever might be interested) to check out some of the events happening in their municipalities on the remembrance of the battle of Karbala. I will not talk about the battle itself, rather I would like to provide a few reasons as to why learning about this battle is vital for all Muslims.

Though I cannot speak to the accuracy of the content of the lectures that are happening in your area, I still implore you all to attend these events in order to gain knowledge of the incidents. Go read a book or two about the battle of Karbala (academic presses tend to publish the most historically verified recounts).

Here are three reasons to learn about the battle of Karbala:

Many of us take Islam for granted and rarely, if ever, question its historical development to what we have come to know of it in the modern day. Very few of us can articulate the history of the formation of the Sunni orthodoxy that many subscribe to. However, it is important to point out that the concepts of justice, passion, martyrdom/sacrifice, preservation, guardianship, and patron ship that we have come to know and love can all trace their theoretical roots back to the epic battle of Karbala.

We have come to take ideas and concepts within Islam for granted, and we have reaped the benefits of those ideas in our daily practice of lived religion without being self-aware of why we believe what we believe. We can continue to reap the benefits that these concepts provide us without ever questioning or exploring their originations in the battle of Karbala. In doing so, we are discussing and living ideas that are devoid of any knowledge through which these ideas/concepts are supported and constructed. Hence, I urge us all to become more self-aware of the faith that we practice and subscribe to with such pride.

Since the waning influence of the Safavids at the turn of the 18th century to present day, the Sunni orthodoxy has strongly dominated our retelling and interpretation of Islam’s history. To draw some sort of comparison, what we learn about the history of blacks in America or the legacy of Native Americans is controlled by whites in this country. Any middle school or high school social studies teacher with a rounded education in American history will tell you that our American history is seriously skewed in favour of a privileged white-retelling of history.

It’s easier for some whites to say, “Let’s put racism aside” when ‘racism’ is a socio-political construct that oppresses minorities.

It’s a position of privilege that is afforded to them that allows for the dictation of how we remember and know our history and legacy. More importantly, these positions have grave consequences for human beings when a skewed awareness of other peoples’ narratives is missing from legal and policy development. A Daily Show clip highlights this.

Similarly, many Sunni Muslims today will rhetorically ponder “why do we have to create divisions of ‘Sunni’ and ‘Shia’, and why we can’t we all identify simply as ‘Muslims’?” Though I acknowledge that the Sunni-Shia discussion is beyond the scope of this explanation, the ability to do away with ‘labels’ is something afforded to a person of privilege.

As Omid Safi puts it,

“It is vital that mutual respect and coexistence not be a license for eradicating real historical grievances and particularities.”

Every Muharram, if not at every khutba (sermon), Shias remind each other of the commitment to justice the Prophet Muhammad’s (PBUH) beloved grandson Imam Hussain (RA), granddaughter Zainab(RA), and about 100 other close family and friends made in Karbala. They remind each other so as to preserve this important historical narrative that could one day be extinct like the number of other developments in our religion that have escaped preservation.

Reflecting on the battle of Karbala is also a way for many to call attention to the on-going oppression of Shias and other minority groups (seriously though, the oppression of Baha’is in Iran is highly hypocritical) around the world (e.g. Gulf States, pre-war Iraq, Bahrain, etc).  Neither Shia Islam nor Sunni Islam can lay claim to an absolute truth of Islam, but together, and within each respective tradition, Muslims are able to achieve a more holistic picture of truth.

Being completely unaware of events such as the battle of Karbala causes us to sacrifice a comprehensive understanding of our religion and tradition.

I implore you to study the religion to which you subscribe, and fight for a more robust, anti-hegemonic retelling of Islamic history. Historical narratives shape a lot of our belief in Islam, ritualistic practice, memories of our Prophet Muhammad (PBUH), and Quranic interpretation, which in some countries results in oppressive policies and laws.

Familiarity with what is out there will inform our understanding of what we believe and why we believe it. The way learned people fight for accurate retellings of American history in classrooms, this should serve as inspiration for us to become more aware and socially conscious of the narratives being cut out of our retelling of history.

Certain historical events transcend being a moment that took place in a given time and space. They become cosmic events that still remain impactful and influential in our lives across time and space today. These include events like the crucifying of Christ, the mental transcendence of Siddhartha, and even the battle of Karbala.

These events are remembered by scores of people in many different ways. Both Sunnis (e.g. Turkey) and Shia Muslims reflect on the battle of Karbala in many different ways. Events in New York like ‘Muharram in Manhattan’ showcase one way in which Muslims remember and reflect on the cosmic event of Karbala and how it has shaped much of Islam’s legal, juridical, ethical, and overall normative frameworks overtime. These events can be inspiring or they can turn someone away, regardless of what happens, the rich and meaningful wisdom found in this cosmic event is waiting to be tapped by active, not via passive efforts (e.g., such as attending an event or two). It must be sought after and discovered.

One lesson that I have retained from a Turkish Sufi teacher, Cemalnur Sargut, is that Karbala teaches us that we are Imam Hussain (RA). We are also Yazid. We must overcome the destructive ego (Yazid) within us and establish the humility and social consciousness (Iman Hussain RA). We must engage in a constant battle with ourselves.

Another interpretation that has also stuck with me is to recognise the fundamental fight against systematic oppression, to stand up for justice even when it is against one’s own community.  The events at Karbala teach us to stand up for all the Hussains of the world. The tragedy reminds us that evil succeeds when the good remain silent and are not actively addressing evil.

There is a lot of thematic and symbolic meaning waiting to be extrapolated for those interested in deepening their spiritual sensibilities. Thus, I argue that attending events on Karbala during the month of Muharram with an open mind, open heart, and a willingness to learn, will provide you with insights into lived religion, and hopefully it will also inspire you to explore, discover, and learn more about yourself and your belief system.

The author is an ethicist interested in ways Islam can expand the secular consciousness. He is the creator of #MIPSTERZ and host on the talkshow "Hot Sauce x White Sauce" He tweets as @Abbasrattani (twitter.com/AbbasRattani)