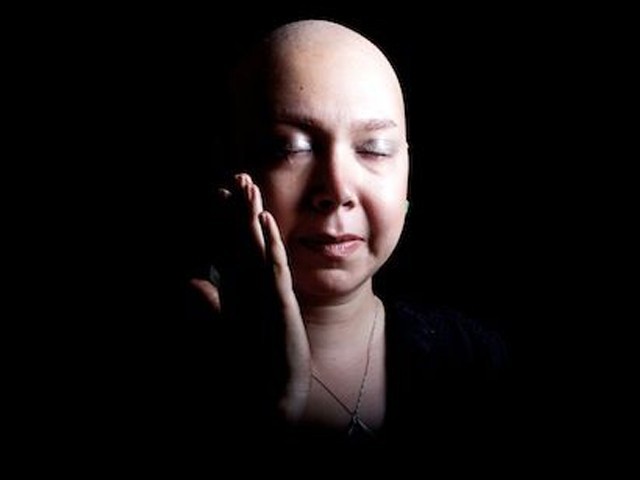 Iranian breast cancer patient Farvah sheds a tear as she poses for a portrait in a studio in Tehran. PHOTO: AFP

It was the summer of 1999 when Pakistani cricket fans were eagerly hoping our cricket team would bring home the second World Cup from the Lord’s Cricket Ground in London. That night, I was not watching the hyped Australia versus Pakistan match in the comfort of my TV lounge or with my family and friends; rather I was watching it with my mother who was lying in a hospital bed, after undergoing a single breast mastectomy (which is the surgical removal of the entire breast in women).

I remember my mother being in excruciating pain. I was too young to comprehend what on earth brought my mother to this stage, I was angry and confused because I did not understand why she had to undergo two surgeries even though she would consistently be visiting experienced doctors at one of the most renowned hospitals of Karachi.

As I grew older, I came to know that the doctors at this renowned hospital in Karachi had misread my mother’s breast lump for around two years; and two years are enough for the lump to grow bigger and harder. To diagnose whether it was cancerous or not, she was scheduled for a lumpectomy (a surgical procedure that removes only the tumour and a small rim (area) of the normal tissue around it). The reports showed stage two breast cancer which had already spread to her lymph nodes (part of the body’s immune system) in the left underarm area. Therefore, to prevent the cancer from spreading to other parts of the body, she had to undergo a mastectomy of her left breast.

To further prevent the cancer cells (if any were remaining) the doctor prescribed radiation therapy, which is a form of high-energy particles or waves, such as x-rays, gamma rays, etc, to destroy or damage cancer cells . Since radiation only works around primary areas, she was further administered with chemotherapy (chemo) which is a combination of pill form or medicine injected intravenously (into a vein with an IV) to treat cancer.

The goal of chemo was to kill cancer cells throughout the body which may have spread to parts of the body away from the primary (original) tumour. Although the treatment procedure nauseated her beyond belief and caused hair Loss, but my mother did not lose hope and strength.

However, 15 years after my mother recovered from breast cancer, my life took a U-turn. It was the summer of 2014 in June when I developed a constant pain in my right breast which made me cautious and I started getting flashbacks of my mother’s cancer treatment days. One day, the thought of having to deal with the entire diagnosis of breast cancer jolted me out of my bed. Without delaying things any further, I scheduled an appointment with my primary care physician and the next thing I knew I was sitting at the radiologist’s office with an ultrasound report revealing that there is a cyst which needs to be biopsied.

I underwent a needle aspiration procedure, which is meant to draw a liquid sample from the cyst. The struggle of inserting a heavy needle in my right breast under a localised anaesthesia was traumatic as the doctors figured the breasts were too dense. I couldn’t hold back my tears and screams because the pain was so intense. After failed attempts of needle aspiration, it was then determined that since it was a lump, it would need to be removed surgically in order to be able to tell if it was benign or malignant.

At the age of 28, knowing that my early age pregnancy and breastfeeding routine would protect me from breast cancer, I was at a loss after hearing about my lumpectomy. While recovering from lumpectomy and waiting for my biopsy reports, my mind automatically edged towards all sorts of negative thoughts about chemotherapy, losing my hair and ultimately losing my breast just like my mother did. It was devastating.

Finally the day arrived when I was sitting at the breast surgeon’s office, waiting to hear the results. The doctor was snipping my dried out stitches with a pair of scissors and examining my recovery from a week old lumpectomy. I was relieved when the reports came clear and I realised that all the pain and apprehensions were worth it. The only way to prevent breast cancer is early detection, especially for high risk women like me who have a history of breast cancer in their family.

However, early detection and regular breast examination should not only be followed by women with a history of breast cancer in their family but for all females once they hit puberty. It took me a real life experience to understand the importance of early diagnosis and early treatment to minimise the possibility of breast cancer.

October is Breast Cancer Awareness Month worldwide. Due to this annual campaign, more and more young and post-menopausal women are able to gain wider insight into the possible causes of breast cancer, such as high breast density and a family history of breast cancer, along with the understanding of preventive measures for women in the form of post-menstrual breast screenings and annual mammograms in post-menopausal women for better results.

This means young women are advised to schedule their breast screening after their menstruation, because the change in breasts due to hormonal fluctuations just before and during the menstrual cycle can affect the clarity of reports. Women over 40, who have reached menopause, should not skip their annual physical appointments which should include mammograms.

Apart from early screening, the healthy behaviour, along with healthy lifestyle choices may help in lowering our risk of different types of cancer listed below.

– Be physically active (Get regular exercise).

– Achieve and maintain a healthy weight. (Survivors who are overweight or obese should limit high-calorie foods and beverages and increase physical activity to help with weight loss).

– Eat good fats (polyunsaturated and monounsaturated fats). These are found in foods such as olive and canola oil, nuts and natural nut butters, avocado and olives.

Since Pakistan has the highest incidence of breast cancer amongst the Asian countries, it is extremely important to emphasise a culture of healthy choices, early examination and diagnosis through public service messages and observing breast cancer awareness month at schools and colleges. Since early diagnosis increases the chances of surviving breast cancer as high as 90 per cent.

The author is an Advocacy Team Member at the New York City chapter of the National Asian Pacific American Women's Forum (NAPAWF* NYC). She writes about women's health and empowerment and loves engaging in a heated intellectual discourse. She tweets as @Tasfaridi (twitter.com/Tasfaridi)