Does Saudi Arabia support the ISIS? 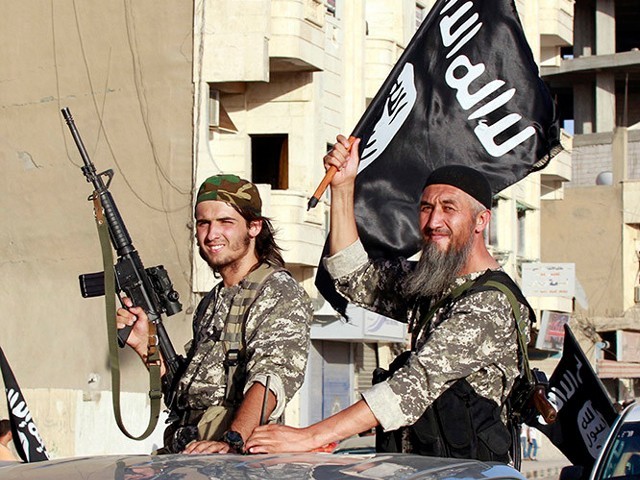 Militant Islamist fighters wave flags as they take part in a military parade along the streets of Syria's northern Raqqa province. PHOTO: REUTERS

For almost four years now, Syrians have been perpetually facing their worst nightmare; five million of them have fled the country while another 7.5 million have been displaced, close to 310,000 made up the death toll until April 2015, and only God knows how many more have been killed past that.

But none of this was enough to trigger Saudi Arabia (KSA) – the strongest country in the region and a major player for regional cooperation – to intervene in this crisis. What did trigger the country (or certain fractions of it) was the imminent presence of countries like Russia and Iran in the region. For those who are unaware, Russia and Iran recently decided to directly intervene in the Syrian civil war after the threat of ISIS and the Syrian radicals became too strong not to. And now people in KSA want to fight these two countries. In fact, according to RT, 55 clerics have signed a joint online statement urging all “true Muslims” to “give all moral, material, political and military” support to the fight against Syrian President Bashar al-Assad’s army as well as Iranian and Russian forces.

What disturbs me is that these people had absolutely no issues when the Sunni-majority rebels were killing innocent people in their fight against the Shiite regime; for them, people suffering in Syria is not an issue, as long as non-Arabic countries don’t enter the region. It makes one wonder what the general perception of a local Saudi is towards citizens of other countries.

And this leads to another question, by fighting Russia and Iran, are these fractions – consisting of clerics and smaller religious groups in KSA – showing their open support for ISIS (which follows the Wahabi school of thought) and the rebels? Can Saudi Arabia try not to be biased against other sects of Islam? I mean, this is war for crying-out-loud; when will the division and side-taking stop? And if they are taking a side, then come out with it. Say it loud and clear for the world to hear, say you support the ISIS.

While the government of KSA has not mentioned anything related to this matter, the fact that the people in Saudi Arabia are so against the Bashar al-Assad regime is disturbing. This news reflects negatively on KSA, a country which has often been accused to sponsoring proxy wars and pulling the strings of many a country – Pakistan being one of them.

Now, before you argue that the KSA government has no stance in this, and decide to burn me at the stake for speaking out against the protectors of Makkah and Madina, hear me out. The clerics, who have signed the online petition asking for the Syrian rebels to fight against Russia and Iran and shown their support to their cause, are all prominent Saudi leaders who oppose the kingdom’s rule. These individuals have huge followings, all 55 of them, and this makes for a considerable population. In such a case, if these people genuinely believe that killing of innocent people is better than having non-Arabic countries enter the Arabian Peninsula, then they really need to get their priorities straight.

I am not saying that Russia and Iran are saintly and doing this for the benefit of humanity either. It is well-known that Russia is only interested in this region because of the growing ISIS threat and that Iran is just giving shape to the proxy war it has been funding against the Sunni uprising. But if their intervention will mean peace in Syria, then why not give it a try? Why jeopardise an operation before it has even been formulated properly?

According to the petition,

“The Western-Russian coalition with the Safavids (Iran) and the Nusairis (Alawites) are making a real war against the Sunni people and their countries.”

This statement ignores the fact that Syria has been led by the al-Assad regime for the past 30 years.

For all these years, the Sunni majority population was accepting of the regime because they did not see the government’s sect, only its performance. So when did it all become about sectarian representation?

While both the Syrian government and the rebels have stated that this is not a sectarian issue, the foreign stakeholders that are meddling in Syria’s internal issues seem to give a different picture. People in KSA need to understand that just because they have power over the Muslim world and money by virtue of their oil, this does not give them the right to interfere in a war where they are only doing more harm than good.

If they have issues with the al-Assad regime being dictatorial in nature, then they need to take a good, hard look upon their own monarchy and oppressive government and try to change that first before venturing into someone else’s war. The Syrian people have lived without their support so far and they can continue live on without their interference.