Why should Indian-Muslims get concessions that the Hindu majority does not? 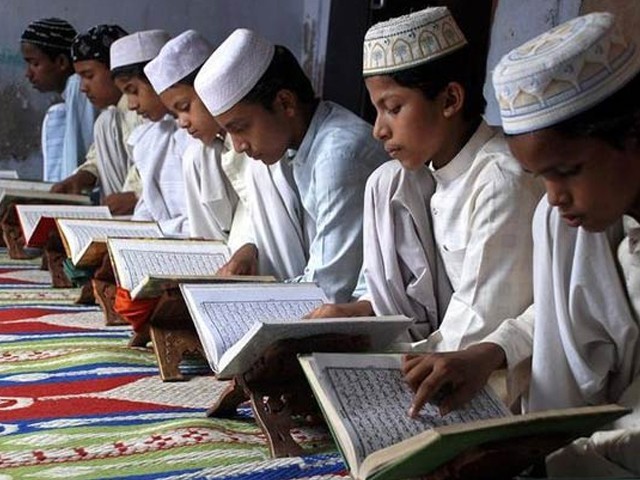 Children read the Quran at a madrassah on the first day of Ramzan. PHOTO: REUTERS

Most Hindus believe that India’s efforts, after partition, to integrate Muslims have always hinged on policies excessively and unduly unfair to Hindus. To many, this is done by extracting from India’s Hindu majority extraordinary concessions and accommodation which would be absolutely unacceptable in any other part of the world.

These efforts have always pivoted on the construct of the Muslim as a special citizen. This can been seen in every policy matter ranging from the double standards propping the unconscionably discriminatory Article 370 in Kashmir to the government funding of madrassahs and the stipends given to imams and mullahs (as opposed to government appropriation of temple revenues and control of Hindu shrines), from the Muslim Personal Law which enables Muslim men the right to practice polygamy to the former Prime Minister Manmohan Singh’s assertion that Muslims have first rights to all of India’s resources, and to everything else in between.

The absence of any effort to bring down the explosive Muslim population growth rate, to bring it on par with the growth rate of rest of the population, and the abetment of large scale illegal Muslim immigration from neighbouring Bangladesh for vote bank politics are yet other manifestations of fake and counter-productive attempts at Muslim integration, which have not helped India or its social fabric at all. Nehruvian secularism, which basically exploited Muslim identity and perpetuated a dangerous mythology of Muslim exceptionalism for political gain, has failed miserably in bringing about positive inter-religious unity.

China presents an altogether different model of Muslim integration. In 2014, China banned Muslim state employees in Xinjiang from fasting during the Islamic fasting month of Ramazan, ostensibly to enable state workers to discharge their duties effectively and professionally. This workplace related rule is, however, inscribed within the framework of China’s some-carrot-and-mostly-stick approach to quell Uighur/Muslim separatism. The banning of Islamic garments in public transport in the province is another manifestation of this approach to integration. Swift execution of Uighur perpetrators of street violence and terrorist attacks is yet one more component of China’s toolkit of measures to integrate its Uighur Muslim population.

Curiously, the widely reported news concerning the ban on fasting did not elicit much reaction or criticism from the “secular” brigade in India or even from the so-called Muslim countries for that matter. However, had something similar even been proposed in India or a Western country, one can be sure reactions would have been tempestuous. The fact of the matter is that few societies can afford to foster integration à la Chine, that is, through brute force.

Cosmopolitan education is the only approach that will work if India wishes to usher in and sustain a new era of authentic ‘unity in diversity’ and rapid economic development in which human values will supersede ideology. India’s ancient spiritual wisdom provides the inspiration and the meta-language for this, and this civilizational strength can play a big part in fostering a new consciousness of cosmopolitanism in every child, of every community. A communiqué entitled “Peace must prevail inside and outside” issued by global humanitarian HH Sri Sri Ravi Shankar to mark the International Day of Peace states that,

“With the right understanding and right education, peace can prevail. It’s the lack of belongingness and ignorance of other traditions that gives rise to conflict and fanaticism. Truth is so vast that one perspective alone cannot contain it. We can end fanaticism through education.”

The communiqué also adds that,

“What our children need is a multicultural and multi-religious education. Together let us resolve to educate our people about every religion in order to have a broader vision about life. If our children know a little bit about all other religions, and they grow up seeing all these as part of one divinity, it will be hard to indoctrinate them. If they are made to realise from a young age that divinity is within each and every one of us, they will not become fanatics.”

This is a very practical, wise and desirable approach for realising true societal integration and can foster a new spirit of universal cosmopolitan brotherhood not just in the country but the whole world.

The cultivation of a cosmopolitan worldview has to be made an explicit objective of every education program, but especially of a madrassah curriculum, if India wants a future free of chaos for itself. Officially, Muslims make up about 14 per cent of India’s population today. In 1947, the Muslim community was merely seven to eight per cent of India’s population. In many parts of the country like western UP, Bengal, Kerala and Assam, Muslims currently make up more than 25 per cent of the population. The Modi Government’s first budget announced in 2014 included INR100 crore for the modernisation of madrassahs, religious schools where millions of Muslim children are schooled. The initial media reports have been very sketchy about what the “modernisation of madrassahs” will involve. While science and technology have been invoked, no mention has been made with regard to fostering a consciousness of cosmopolitanism, something indispensable to non-violence and stability in multicultural societies.

A critical ancillary to this model of integration is a Uniform Civil Code. Having separate legal codes and separate personal laws for people of different religions and communities is an outrageous anachronism which has only served to keep India backward and divided. It is time for India to scrap the Muslim Personal Law and bring both its Muslim and its non-Muslim population within the ambit of a common set of civil laws. This structural change will be especially empowering for Muslim women who make up seven per cent of India’s population. A Uniform Civil Code will serve the cause of a new Indian cosmopolitanism in very positive ways.

The author is an Associate Professor of Foreign Languages. He teaches French and Spanish at LSU Alexandria (USA).