Keep calm, Pakistan: Our cricket team is shaping up quite well 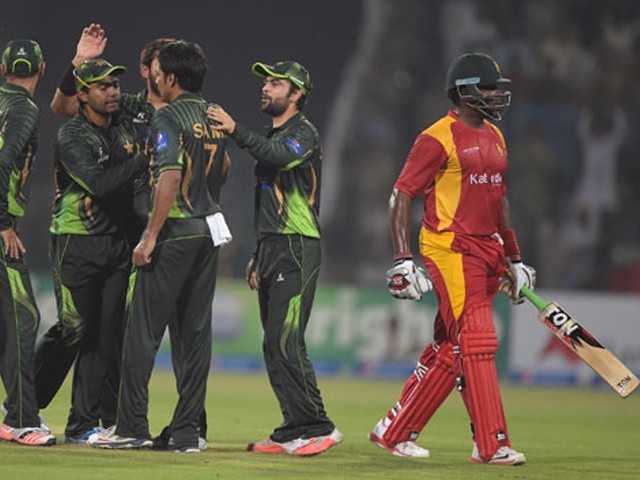 The brief Zimbabwe tour came to an end a couple of days ago, with Pakistan emerging as the victors. It wasn’t a clean cut victory since Pakistan won four out five matches and the one match we lost was under extremely controversial circumstances. Having said that, Pakistan has managed to perform commendably against Zimbabwe this year. This particular tour highlighted five aspects about our cricket team.

Imad Wasim – The most wanted in the team

The first and foremost aspect that needs to be mentioned in this list is the emergence of Imad, more so after the ban on Muhammad Hafeez’s bowling action, which left the Pakistan cricket team in a fix for a while. Imad’s emergence as a composed and collected player is a positive sign for Pakistan, as he brings forth the much needed calmness during tough times.

He displayed this calmness in the previous T20 series against Sri Lanka, where he took Pakistan over the line with a brilliant batting performance, even though he continuously lost partners at the other end of the batting crease. Imad is more than just an effective left arm bowler, a commendable fielder, and an excellent reader of the situation; he also knows how to get the job done.

For our dear professor in his mid-30s, time seems to be running out and pressure is continuously mounting on him to deliver with the bat. There used to be a time when Sikandar Bakht used to say Hafeez is irreplaceable because he brings the required balance which was lacking at that time and no matter how poorly he performs with the bat, he won’t be dropped.

However, things have taken a turn now, and his role is being filled by Imad and to some extent by Shoaib Malik. His batting is coming under scrutiny due to the likes of Haris Sohail and Sohaib Maqsood, who are eagerly waiting in the wings to get a chance to show off their performances. For him to stay on the team, his performance graph needs to improve vastly. The upcoming series against England in the UAE will prove to be a real test of his batting quality and ability.

Five hundred runs in 12 matches with an average of mid 90s and two Man Of The Series awards since his comeback to the national team, Malik is becoming the new Mr dependable for the men in green.

It’s been more than a happy and successful comeback for the 33-year-old veteran who seems hungrier, calmer, more focused, and eager to give his best in terms of performance. However, his performance will be keenly scrutinised in the upcoming series against England, where Captain Azhar Ali and Coach Waqar Younis will rightfully be pinning their hopes on him for standing up to the challenges and playing a pivotal role in helping Pakistan cruise towards victory.

Imad, Bilal Asif, Anwar Ali, and Aamer Yameen – Our future seems bright thanks to them

Not long ago, our nation was quite wary about our team’s future in the T20 format, as Pakistan was short of all-rounder’s, especially after the ban on Hafeez’s bowling action, which left the Pakistani team with no adequate all-rounder at that particular time.

It was quite alarming for all the cricket experts as well, since all-rounders were Pakistan’s forte in the T20 format. However, over the past recent months, with the arrival of Imad, Anwer, Bilal, and Amir these fears and doubts have been brushed aside and we have been able to breathe that sigh of relief we needed so badly.

Given that the mentioned players are not world class by any means, but there is a spark within them and we can hope to refine and polish them into something the team is looking for. They can bowl, at least two of them can bat extremely well, and most of them are excellent fielders, which is enough for us to believe that our future in the shorter format is brighter and more secure than we actually thought it would be a few months back.

Lastly, a comparison of two players with contrasting careers in the T20 format is a must. Mohammad Rizwan is gradually becoming the main stay towards the lower middle order of the team, in ODIs as well T20s, due to the obvious reason that he has shown his worth with every chance given to him by the team management.

His innings in the first ODI match of the series, when Pakistan was five down for some 120 odd runs, was an absolute master class to watch, and is another example of why he is what Pakistan wants and needs instead of Umar Akmal or Maqsood. His energy on the field is above par, and during this short span of time, he is being called the Jhonty Rhodes of Pakistan.

On the other hand, we have Asad Shafiq, who fails to deliver nearly every time he is given a chance As many things as they may be to admire in him at Test level, his performance in the ODI format is below par. Till now, he has played 58 ODIs over the past five years, in which he has scored 1318 runs at a below par average of 25.34 and with nine 50s to his credit.

He was given a chance yet again to perform in two out of three ODIs, even though he did manage a decent 38 in the last ODI, unfortunately he crumbled amidst a tense situation in the second ODI, chasing a wide ball outside the off stump. His continued failure raises a question as to when our selectors will realise Shafiq is not suitable for this format.

Keeping in mind our young and skilled squad, as well as Pakistan’s recent performances against Zimbabwe and Sri Lanka, it’s safe to say we have a more than fair chance at winning the series against England.