Everyone wants a piece of Modi, except Nawaz 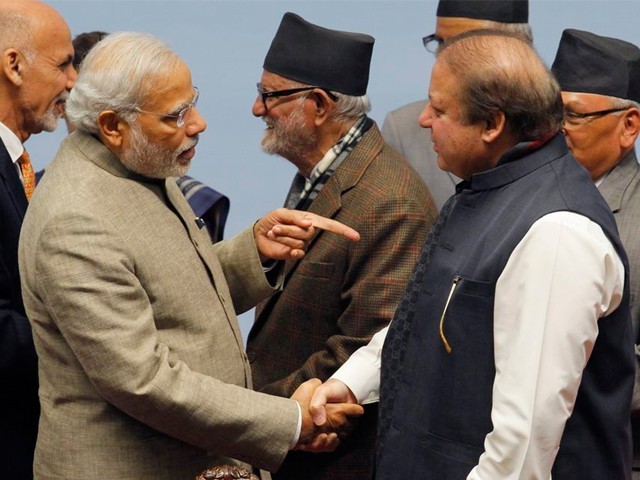 Seated firmly at the breakfast table in his luxurious presidential suite at the Waldorf Astoria, Prime Minister Nawaz Sharif should ideally be a relieved man for two reasons. Firstly, his speech at the United Nations General Assembly (UNGA) garnered positive reviews from even the most critical detractors at home.

‘We hate you but the speech was great’ is the mantra of the day.

Secondly, it received absolutely no importance from the international media and other world leaders. While CNN had initially entertained the thought of covering it, a story on gay Russian citizens made the editor think otherwise:

“Calls for demilitarisation of Kashmir? Nah, go for the gays in Moscow.”

Across the border in India, many have similarly chosen to ‘ignore the statements’ made by the Pakistani prime minister, including Defence Minister Manohar Parrikar,

“We need not listen to others on what we should do in our country. If anyone speaks anything about our country then I will prefer to ignore it.”

Since it is his third stint as the nation’s premier, Sharif is well aware that whatever is acknowledged at home and forgotten overseas cannot be so bad after all.

However, as patrons of his party unite in commending their very own National Security Advisor, Sartaj Aziz, for his ability to draft immaculate manuscripts at the age of 105, it would remain difficult for the Prime Minister to stay content for long. The reason is quite obvious: India’s eccentric Prime Minister Modi.

For the characteristically envious Sharif, nothing could taste more bitter than the praise and glory afforded to his rival over the past week.

At home, Sharif has to endure a tenure that is increasingly marked by Raheel Sharif’s celebrated military leadership. It has now become commonplace to be grateful to Raheel Sharif before dinner is served in many households across Pakistan.

But, whereas this fits in with the larger patterns of Pakistan’s history, the emergence of a dynamic Indian honcho with the world in his fists is something Sharif could not have anticipated. If only Sharif knew how to take selfies and understood the intricacies of Snapchat.

Zuckerberg, Musk, Cook and the ‘did you know Microsoft’s CEO is Indian’ guy – all were present to tap into the world’s largest market for cheap labour, comprising of people adept at mathematics and C++. By the time of the UNGA speech, Modi met everyone but Sharif. The two leaders merely waved at one another before the Leader’s Summit on Peacekeeping.

‘Digital India’ is the government’s attempt to permeate access to internet facilities throughout India, primarily so that people may benefit from digitally-enabled government services even in the most remote parts of India. The inspiration likely stems from Modi’s fascination with the Bollywood cinema of the 1980s, in which everything disagreeable happened because of the nepotism and bribery prevalent in hospitals, police stations and courts. A young Modi vowed that future generations would not grow up to such harsh realities. Henceforth, today, Bollywood reflects many of the ideals epitomised in Digital India’s ambitions: it has nothing to do with the on-ground reality.

Due to his enterprise, India’s leaps in soft power outpace it’s much celebrated hard power gains. The harsher realities of income inequality, arbitrary taxes, community-based marginalisation and below-par exports such as Katti Batti have failed to chase away greedy investors. India now leads the world as the number one Foreign Direct Investment (FDI) destination – trumping even the bootlegging industrialists in China.

Unlike his rival across the LoC, Modi has genuine reasons to smile. As rote learning India’s growth rates and economic prospects has become the surest way to political know-how in much of the world, I will consciously refrain from mentioning the dreaded statistics here. It would suffice to say that India continues to sidestep many lingering economic hurdles that affect the global economy. The Wall Street Journal has gone so far as to state that India is the ‘world’s best hope’ for a complete economic recovery. This proposition also holds true for Pakistani actresses that face blasphemy charges at home.

Modi’s spirit is infectious: journalists, writers and actors follow Modi’s persona and antics with remarkable zest. Modi’s ‘selfie with your daughter’ campaign had everyone in India polishing their selfie sticks. In Bihar, a father took a selfie with his 12-year-old daughter before marrying her off to a tree, showing that he truly has become progressive. Thanks, Modi!

Somewhere in Delhi, plans are underway to customise the Modi app for the new iPad Pro.

In Mumbai, film producers are flocking to get rights to the prime minister’s story for a Bollywood biopic.

Everyone wants a piece of Modi and it is not difficult to see why.

Modi is the homegrown Tyson: someone who rose up from the streets, has a history of domestic violence and won’t shy away from aggression. India’s diplomats have picked up on the habit. The testosterone-fed foreign ministry spokesman Vikas Swarup showed little restraint when he launched a scathing Twitter-based offensive to counter Sharif’s UNGA escapade.

To de-militarize Kashmir is not the answer, to de-terrorize Pakistan is.

Pakistan is not primary victim of terrorism but of its own policies. It is in fact the prime sponsor of terrorism.

Pakistan's instability arises from its breeding of terrorists. Blaming neighbors is not a solution.

“Pakistan is not primary victim of terrorism but of its own policies. It is in fact the prime sponsor of terrorism”, blurted the spokesman just before he reached his word limit. The Indian bureaucracy’s confidence has reached an all-time high, aware that its government won’t budge down due to external pressures, unlike the ‘wimps’ from Congress.

In the realist enterprise of the international state system, one in which efforts at liberal institutionalism have faced increasing setbacks from real world interests, Modi fits in like a glove. Sharif, after decades of army coups, artery-clogging dieting and counter strategising tabdeeli efforts, has been left fatigued and melancholic.

A hundred yards away, nestled in the very same hotel, Prime Minister Modi’s demeanour exemplifies that of a not-out, triple centurion on the last over of the day. Flower bouquets from countless embassies and world leaders pour in, and although flowers and gifts have remained banned at the 7 Race Course Road since Pakistan began focusing on tactical nukes, the prime minister has made an exception during this particular trip.

Back at the Pakistani prime minister’s suite, Sharif finishes his meditative hour long morning meal. Wiping his brow clean, he stares into the lucid Manhattan skyline outside his window, shrugs and asks himself,

Just then, a political aide walks in with glad tidings from back home: in fierce competition, the Chief Minister of Punjab Shahbaz Sharif has proudly announced his Analog Punjab campaign.

He works as a media consultant for leading multinational organizations and NGOs within the country. He writes intermittently for various publications. He tweets as @AliUmair (twitter.com/AliUmair)