Singh is Bliing: All that glitters is not gold 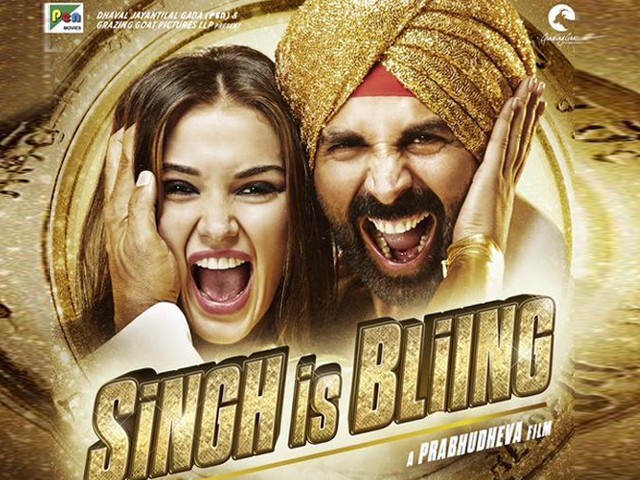 Prabhu Deva’s previous release was Action Jackson, which didn’t do well at the box office either. PHOTO: SINGH IS BLIING FACEBOOK PAGE

Akshay Kumar is one of the most loved and sought after celebrity in Bollywood and this is why his movies do exceptionally well at the box office, irrespective of their script, subject, direction and content. Kumar paired with Prabhu Deva is a lethal combination, substantiated by 2012’s block buster Rowdy Rathore. This is why the audiences were desperately waiting for the Kumar starrer Singh is Bliing.

Kumar’s fans wondered if Singh is Bliing will be a blockbuster at the box office like his previous films? But will this movie be as entertaining as his previous endeavours?

If you are too big of a Kumar fan, caution is advised before reading further, because even Kumar couldn’t save Singh Is Bliing from doom.

Singh is Bliing is about Raftaar Singh (Kumar) who lives in Bassi Patna, Punjab. Raftaar has a nonchalant attitude towards life but has a heart of gold. Raftaar’s father gives him two options; either marry his friend’s daughter, an overweight Sweety or work under his friend’s supervision in Goa. Raftaar picks the second option and leaves for Goa, where he meets Sara (Amy Jackson), daughter of a ‘mafia king’. Mark (Kay Kay Menon), a deranged thug, is thirsty of vengeance from Sara for she offended him in the past. The rest of the movie is hoopla of these very circumstances.

No brownie points for guessing what happens along the way, can’t be called a Bollywood movie without a typical love story, can it? Insanity prevails throughout the movie without an ounce of innovation, except Kumar’s energetic Bhangra moves, of course.

Amy Jackson doesn’t have dialogues in Hindi, none at all, but she manages to leave a mark. Her action sequences are very well executed. Lara Dutta plays a small role in the film, but looks breath taking in every shot, even in ghastly outfits.

Menon is one of the finest talents in Bollywood but he is literally wasted in Singh is Bliing, the same way he was wasted in Drona. After Haider and Rahasya, this performance was a major let down from Menon. Don’t know if we should blame Menon or the script for it. The 54-year-old Rati Agnihotri plays Kumar’s mother’s role in the film and does justice to her role. Kareena Kapoor, Prabhu Deva and Sunny Leone are seen in cameo performances.

Singh is Bliing is amongst those movies whose performance, script and logic don’t make any sense and perhaps are also not needed. Why? Because it’s supposed to be brainless comedy. Kumar performs all the absurd activities suavely, which is why the audience watches it despite its idiocy.

Prabhu Deva’s previous release was Action Jackson, which didn’t do well at the box office either. If Deva wants to keep making such senseless movies, he can perhaps cast only big stars, as only star-power can (perhaps) save such ridiculous movies from drowning. I was hoping may be the music of the film can help it from drowning but its not applause-worthy either, even though it suits the genre of the film.

Singh Is Bliing is an attempt at slapstick humour and glorifying Singh-ness, but fails miserably. Those who are thinking it would be something similar or close to Singh is King – please refrain. The movie might just do well with the masses who don’t intend to exercise a single brain muscle. Those who intend to apply logic while watching movies, don’t bother.

I would rate Singh Is Bliing 1.5 out of five.