The boat ride into the arms of hope and terror 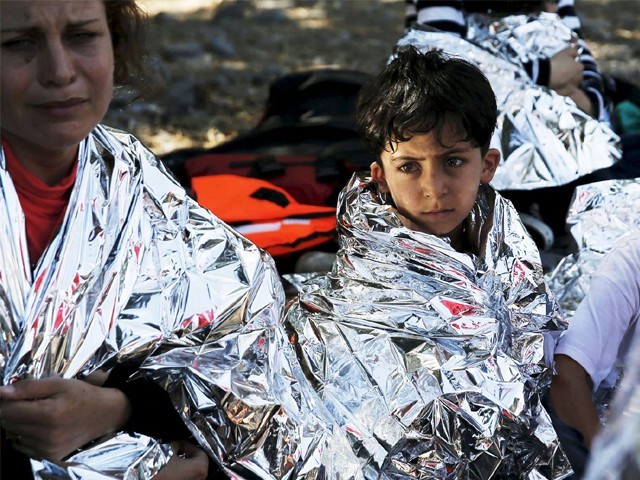 A Syrian refugee boy is wrapped with a thermal blanket after a dinghy carrying Syrian and Afghan refugees deflated some 100 metres away from the shores of the Greek island of Lesbos. PHOTO: REUTERS

The tide was low that night. I had one foot under water and the other foot on the beam of the starboard. The bubbly little machine that the driver was certain would take us to our destination, swayed to and fro as the gentle waves touched its sides. Seasickness had already crept under my skin as I moved along with the raft, unbalanced, on the Mediterranean. It’s funny what a little seasickness could do to me, I thought. From what I was running from, seasickness was merely a remedy.

The captain of this Titanic ushered me on to the boat and I grabbed all my belongings with me – a knapsack with a few dry rations, a banana and my teddy bear for when I felt lonely. The night made it difficult for me to see any faces and as I looked around, I hoped the clouds would clear. And the shiny moon would reflect its light, and make it possible for me to identify a few faces. Maybe even strike up a conversation, make a few friends. After all, who knows if I would ever get the chance again.

Baba said Malaika would be on a different boat sometime later that night. I was certain he was telling the truth, because whenever baba lied, he couldn’t help let out a nervous smile. Little did I know, he had perfected this dubious act and could lie without a wrinkle on his face. For neither Malaika nor baba took the boat later that night – or any other night. They never had the chance.

Baba had told me earlier where I was going.

“Turkey, the home of the Ottoman Empire. There you will start a new life, and learn new things and meet new people,” he said.

“But baba,” I argued. “What don’t I have here that I must go to Turkey to achieve? Away from my home and my family?”

Baba took a long deep sigh and I saw his face melt into various different expressions. The words that he spoke were subdued by a series of sudden gunshots and yells. The door of our two-bedroom house had been kicked down and in walked two men. They were wearing dark turbans and their faces were covered with the cloth from their headdresses, their bodies were adorned by army gear and their hands bejewelled with guns, almost as tall as me.

Malaika and I rushed behind baba, both grabbing each other’s hands in the process and in a swift movement, I clasped onto baba’s sweaty palm. Baba did his best to stand sturdy and straight in front of these turban-clad men, but he knew that the taller he stood, the more he would have to fall in the dirt.

One of the men walked around the room, as if inspecting for any signs of trouble. After a brief stroll around our living area, he seemed disappointed that he didn’t find anything worth punishing us for. Then he turned around and I saw his eyes glimmering with delight as he pointed to my sister.

“How old is she?” he beckoned. Baba turned to identify his child.

“Twelve”, the word barely coming out of his throat.

“She is twelve, then why is her head not covered?” the turban-man questioned.

Frazzled, baba scanned the room to see if Malaika’s scarf could be found. Failing to form an excuse, he remained silent. The turban-man asked the question again, but more ferociously. Baba remained silent.

“I cannot wear my scarf because you are standing on it,” said Malaika from behind Baba.

The turban-clad men looked beneath their feet and realised that indeed it was true.

“Who told you to speak out of turn?” said the turban-clad man as he charged towards us.

With the butt of his gun, he hit baba, pushing him aside and back-hand slapped Malaika across her face. He then asked his comrade to pass the scarf he was standing upon and shoved it towards Malaika, ordering her to wear it. As she wrapped the white scarf around her head, now imprinted with the shoe marks of the two men, he spoke again,

“If I see you bareheaded again, I will make sure your head and your body are miles apart from each other.”

As he stood up again and walked away, he gave me a stare. A stare I still see in the darkness of the night. Those two eyes peering inside my soul, shaking up the devils within me. A stare so smug, that I prayed to Allah (SWT) never to let me encounter such merciless eyes again. And I believe in that moment, He had listened. Because I was on the boat. Only me, not Malaika nor baba.

Jamaal, the man who had accompanied me from my house in the city to the shore, had left a while ago. I was wondering if he had gone too far for I felt a rush to jump out of this vessel and run away back into the lights. Maybe if I ran fast enough, I could catch up to Jamaal. Maybe I could ask him to take me back to baba and Malaika. I could not bear the ever-increasing distance that I felt, I was creating while sitting on that boat. It was as if my journey to a better life could solely begin after I had left everything from the previous one behind.

I was engulfed in the ocean of my thoughts before the motor of the little boat interrupted them. The woman I was sitting beside started whispering prayers to herself with a reckless abundance. I was too young to remember mama, but from vague memories of her, I knew she would be exactly like this woman. She would be reading verses to herself aloud, hoping and praying to the heavens that we make it out alive. After the woman had recited those verses, I saw her gently blow air on herself and her little son beside her. Some air from her breath fell clumsily upon me, and I felt protected.

The captain of the boat, or so it seemed, came running towards us from off the shore.

“The boat is too heavy, two of you must come off immediately or we will not be able to leave the shore,” informed the captain, as he struggled to catch his breath.

Instantly, a loud wave of chattering began within the inmates of this little vessel and that chattering turned into screams. And those screams turned into violence. There was a push and a pull and I could feel myself being dragged around between bodies as people pressed and shoved to keep their spots on the boat.

After a few minutes, I heard a loud explosion nearby. A neighbouring vicinity collapsed before my eyes. Silencing everyone for a moment, before they resumed their struggle to keep themselves alive, a little while longer on the boat. The quarrel turned into a row, and eventually, the weakest of the lot were thrown overboard. With a loud splash, I heard two men fall into the dark glistening water. Their relatives within the boat screamed but it was all in vain. One of the men tried lunging back onto the boat before he was hit by an oar that a rather large man had swung at him.

I hope he had died instantly, because I heard later that the beach where we harboured on was raided by the Daesh, and every moving thing found was killed, mercilessly.

The boat began to move as the wind picked up and the dark clouds cleared the sky. I saw the faces of the people; they were tired and terrified. Their eyes longed for sleep and their bodies demanded rest and yet they kept going, escaping from death. Or at least prolonging it as much as possible.

I turned back to see the city I once called home, fade into a dotted light like a star, somewhere deep in the cosmos. I could look at it, feel its presence but I knew it had faded far into the past, and staring at the gleaming star could only bring back pain and suffering. So I stopped staring at it and looked forward, towards the empty abyss. There was no light there, just the reflection of the moon upon the dark waters. And maybe that’s all I needed. Maybe reflecting upon my life was all Allah (SWT) had planned for me.

As I felt the late night turn into an early morning, I relaxed myself in the 11-inch seat I was provided. I had my teddy bear in hand, squished under the terrifying weight of my life. My stomach rumbled incredibly, yet my appetite was full. I had escaped the terrors of my homeland just to experience the terrors of a foreign land. Nonetheless, the foreign land was far and I was tired. So I lay my head to rest, on the shoulder of my pretend mother and dived into dreams of better days.

I wish to dedicate this story to all the Syrian refugees who have fled their country in hopes of staying alive. I hope and pray they find the solace and the tranquility they are searching for. I also pray that Allah (SWT) gives them the second chance they deserve. In hopes of better days.