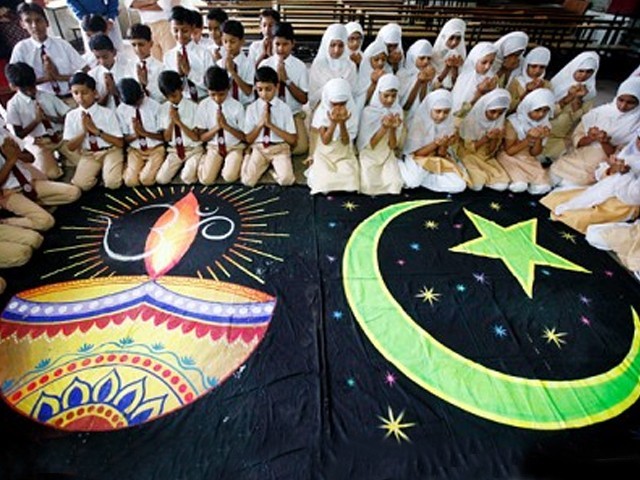 Hindu and Muslim children offer prayers for peace inside their school in Ahmedabad. Marriages between Hindus and Muslims are not common in India and are frowned upon by both communities. PHOTO: REUTERS

It happened seven years ago in Surat, Gujarat. My sixth grade hockey team was staying back for practice, and we were taking a break, cooling off beneath the shade. Suddenly, one of my friends went a bit to the side and spat. This odd behaviour by my well-mannered teammate aroused my curiosity, and I questioned him about it.

He explained that it was the month of Ramazan and he wasn’t supposed to swallow anything. I took it as a quirk of his religion and let it go, remembering the several fasts kept by the Hindu aunties in my colony.

Looking back, it was probably the first time I consciously realised the differences between people due to their religion. A year later, I stumbled upon a magazine which covered the Godhra riots. I was appalled by what I read, the rapes and the cold-blooded murder of innocent people. I began to view the behaviour of my Muslim friends in Surat in a different light.

They always were in their own group during school hours, and while no one shunned them, no one seemed to interact with them either. It was only during the hockey practice sessions that I saw them laugh, joke and taunt freely with the rest of the team. This awareness made me realise the prejudice towards the Muslim community, and from then on, I became conscious about it.

The thought that such prejudice still exists in our so-called ‘secular’ India felt incomprehensible to me at that time. Over the years, I came to realise that it wasn’t out in the open, at least not in the urban educated society. No, this prejudice lay under the skin, and was generally not shown in public. It was revealed among close friends and family, their views were discussed and justified without anyone judging them.

Given the odd nature of my name, I’ve experienced this prejudice first-hand. Of course, most people are cautious enough to not directly question my religion, but they do beat around the same bush.

Were my parents a fan of cricket, that I was named after a former captain of the Pakistani cricket team, Inzamamul Haq?

Different questions, in the same casual manner, all veiling the real question lying behind it – was I a Muslim?

No, I would reply. Both my parents were Hindus.

I remember a certain incident which occurred during my coaching classes in the 11th grade. Our classes were held after school hours, with two of my classmates and I. Our physics teacher had a habit of making small talk during our breaks. He was in his 30s, with greasy long hair and an annoying habit of chewing and spitting ‘paan’.

On that particular day, he began talking about his views on religion, Islam in particular. Muslims, he proclaimed, were the root cause of all our troubles. Rape, corruption, et cetera was entirely their fault. They should have gone to Pakistan, and those who remained in India, should have been thrown out of the country. One of my classmates asked whether he watched the movies of Muslim actors in Bollywood, in an attempt to get him to stop talking. But my teacher claimed that he didn’t watch movies of Muslim actors. He believed that Shahrukh Khan helps in funding Muslim terrorists in Pakistan and India.

We sat there quietly, the three of us, listening to this educated man with a degree from Indian Institute of Technology (IIT), rant about his paranoid ideas. There was a hint of glee and malice in his voice when my classmate brought up the fact that my middle name was ‘Inzamam’ (People generally used the easier and shorter ‘Karthik’). I quite enjoyed watching his face pale with apprehension.

It made me wonder that if an educated man in a position to influence children’s thoughts and ideas behaved like this, then what about the uneducated sector India?

I have been in numerous debates on generalising Muslims, due to the formation of the Islamic State.

Is this prejudice justified?

No, was my conclusion.

“What about the terrorists attacks?” a friend questioned.

Every religion has its fanatics, and through certain circumstances (like the Russian invasion of Afghanistan leading to the formation of al Qaeda), it just happens that Muslim fanatics are more prominent and inflict more damage than the rest.

Isn’t the Holocaust and the ‘ethnical cleansing’ later in the Balkans a reminder that the problem lies in the human nature, and religion is merely used as an excuse?

To claim that Muslims were responsible for all the terrorist attacks would be a ridiculous thing to say. If, in a hypothetical situation, a study claimed that most rapists in India were Hindus, would that cause you to shun those that practiced Hinduism or feel ashamed for practicing that religion?

It is a sad fact that this prejudice is passed onto the young by their elders. While returning home in the school bus in Surat, a young boy, perhaps the age of eight or nine years, asked me if I was a Hindu and if I was  a meat-eater. On saying that I was a Hindu, and that I was a vegetarian, he happily sat next to me, and chattered away. While my 11-year-old self wondered whether I should mention that I still ate desserts made with eggs.

A child so young to be affected by a prejudice he has no idea about, and the fact that he will probably grow up to teach the same to his own children, without actually knowing why. This seems to be a horrible tragedy and marks shame on our society. A few members of my extended family often speak quietly about the ‘M’ word while talking, away from the children.

Four years ago, we were told in school that if any of us wanted to change our names, then now is the time to do it because our 10th grade report cards bearing our names are important and will have to be shown for any college or job interview we went for. I remember an aunt of mine calling me up and advising to remove ‘Inzamam’ from my name.

“That is fine,” she said. “But what if you want to go abroad for your studies or a job?”

Looking back, I’m glad I didn’t change my name. In some ways, it stands for what I believe in, a secular society, free of prejudice in any form. Over the years, I have lost touch with my team mates back in Surat. But whenever I hear about any communal clashes, I think of them and their families, and the way they accepted me. I still remember the vegetarian food that was cooked specially for me when I visited my friend’s house on Eid.

I hope, like many others, for the day that such prejudice ceases and we see each other for what we truly are – just human beings.

The author is a student from India.