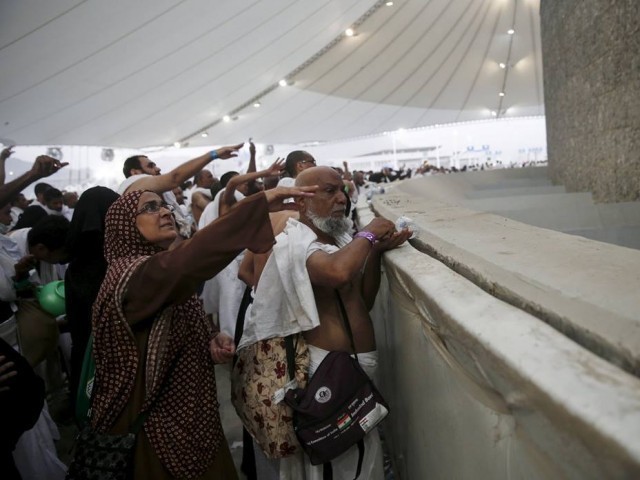 Muslim pilgrims cast stones at pillars symbolising Satan, during the annual Hajj pilgrimage on Eidul Azha in Mina, near the holy city of Mecca on September 24, 2015. PHOTO: REUTERS

The tragic stampede in Mina during the recent Hajj and the way it was covered by the media, mainstream as well as social, once again revealed all that is wrong in the way journalism is practiced in Pakistan.

Media stirred the pot with the ingredients of sensationalism, conspiracy theories, misinformation, disinformation and deliberate biases. This was all based on a historical baggage, and the offering served was such a mish-mash that it became difficult to sift fact from fiction.

Yes, it was a developing story. In fact, it was not just a ‘story’, but it was a tragic human event that demanded sensitive handling, a patience for the truth to emerge and careful handling of it, which was found to be seriously lacking. It seemed that the mind had already been made up about whom to blame and how to stand in the ‘them and us’ camps.

Even the eye witness accounts that started pouring in immediately afterwards, did not do much to dent some of the preposterous opinions that were aired – making a human mistake and general lack of indiscipline morph into a regional conflict rooted in sectarian divide.

The death figures, the pulling out of old pictures of previous stampedes that had actually prompted the massive improvements in traffic flow leading to ‘one-way’ arrangement for rami (the symbolic stoning of the devil) at the Jamarat were a deliberate attempt at misinformation, with an ulterior motive, as were the blurred pictures of dumper trucks and bulldozers that were removing trash but appeared on the media with captions stating they were desecrating the bodies of the hujjaj by picking them in this manner.

Do the gatekeepers in the media go on leave at times like these? Yes, there are no gatekeepers besides the contrarians on social media who keep countering such biased narratives. But what happens to the mainstream media? Sometimes it is overcautious in giving the complete picture, and at others, it completely distorts the picture.

Granted that we have many ‘more loyal than the king’ (pun intended) who want to hear no evil, criticism or questions about the way the Kingdom of Saudi Arabia manages the massive congregation at Hajj.

But we also have the other extreme in the media, who are riding the crest of a wave of negative feelings about what goes on there, and this group amplified the unverified stories of the VVIP movement being the cause of the stampede. They did not cross-check or even take into account how many miles separated the actual place of the incident, Maktab 93 and the Jamarat, simply displaying a wild abandonment of all journalistic norms.

We surely did not need Pakistan Electronic Media Regulatory Authority (PEMRA) jumping into the fray by issuing a warning about stoking resentment against a ‘friendly country’ to stem this tide of negativity.

What was needed was a team of journalists and editors who would check the death figures, the figure of missing persons from the citizens and official sources and then draw some conclusions.

PEMRA must also note the criticism or calling for improvements in arrangements, so such tragedies can be avoided in the future is not taking a pot shot at friendly countries. These calls need to be amplified through the media, but it should be careful with the directives in this regard.

I know it is hard for journalists to physically verify when the place is Saudi Arabia, as you can’t just ask a reporter and camera team to hop on a plane and just get to the spot. But compare the coverage to the other media. Even Iran, which somehow, courtesy of the media, was portrayed as a victim, acknowledged failing on part of its own contingents, despite suffering the maximum number of casualties.

The great variance in the death count and the missing persons of course is surprising but understandable. The figures quoted by The Guardian were almost four times the figures that were coming out in the Pakistani media which in my opinion was a plus point as was the constant transmission of the numbers that were being flashed about information.

So if the media could show responsibility and temperance here, why did it have to suddenly get into the mode of speculation and blame game? Even before the facts had emerged?

Was it by design or was it by default where it feels compelled to ‘feed’ its consumers with a commodity, even if half-baked, to whet its appetite for more?

These questions are mostly being asked by media practitioners who want to see the media develop into a responsible industry. Media must be wary of the day when their consumers start asking these questions.