Chop Chop: A healthier wok through the fast-food lane 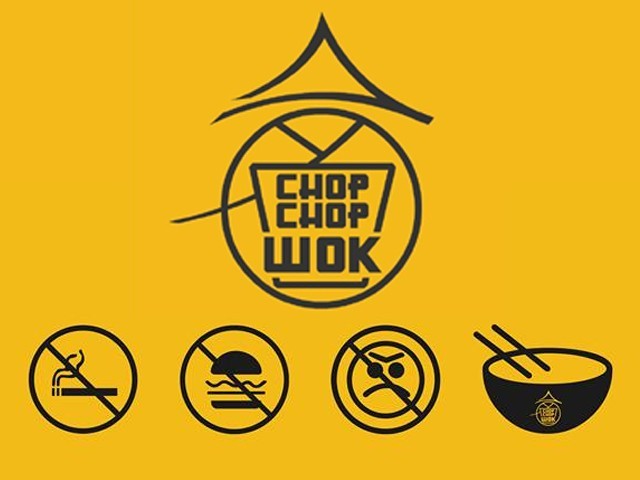 Situated in the meandering streets of khadda market, Chop Chop Wok is a new and fast emerging eatery.

A few days ago, hungry for something different, my friends and I decided to give Chop Chop Wok a shot. Considering it was five in the evening, we didn’t expect the place to be completely packed, and it wasn’t. Luckily, we were seated upon arrival.

Situated in the meandering streets of Khadda Market, Chop Chop Wok is a new and fast emerging eatery. The concept of Chop Chop Wok is based around creating your own meal and eating out of a box. With 180 different combinations, the word monotonous cannot be used for their menu. Not yet, at least. 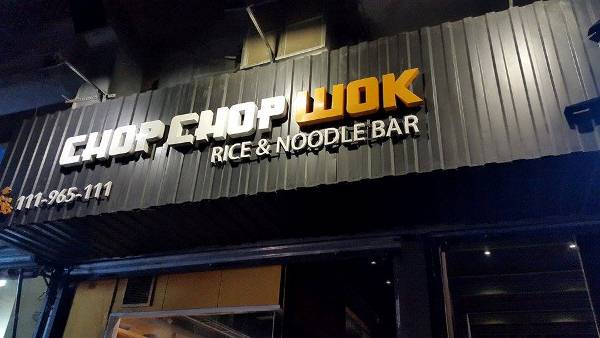 The inspiration behind Chop Chop Wok seeped into the architecture of the place as well. Minimalistic and clean, with five wooden tables and benches which can seat around 22 people at one time, the place has an uncomplicated vibe to it. Customers can see their food being cooked by internationally trained chefs on a live flame in front of them, which dispels any notions of unhygienic food.

When it came to ordering food, the menu was a simple step-by-step process. It states the choice of bases, flavours, and meat. What I liked most about the menu was the availability of healthy choices such as brown rice and the fact that each meal adds up to around 300-350 calories, which I feel is a fantastic amount for a more than filling meal. And in terms of affordability, one dish at Chop Chop cost us as much as a meal at Burger King would cost. Except this is definitely a healthier pick in the fast-food genre.

The staff seemed in control and polite, and were helpful explaining the types of dishes on the menu to us. And the moment you’ve all been waiting for – the food. To begin with we decided to order the sticky BBQ wings, lamb chops with teriyaki sauce (which were served to us complimentary as a taster for Eid – WIN!), and chicken tom yum soup as our starters. For our main course we ordered, the Nasi Goreng with egg, Pan Asian rice noodles with chicken, Thai red curry with brown rice, Thai green curry with jasmine rice, Chilli prawn with calamari, and black pepper beef with rice.

Our food took around 25 minutes to be served. When we asked the owners about where they drew their inspiration from, they explained that it was mainly from London style eateries such as Wok to Walk and Wok Wok; ideally a take-away. The fact that the concept of the eatery is take away, the cut off time should be anywhere between seven to 10 minutes. So timing would definitely be something they would have to look into in the future.

Cooking lamb can be tough. If undercooked, it ends up tasting rubbery, but the teriyaki lamb chops were soft and tender, and had just the right balance of a sweet and salty combination. 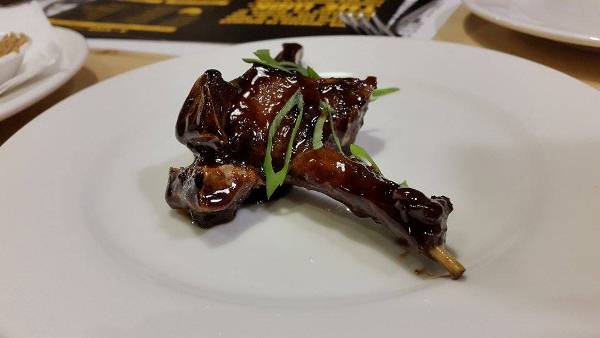 The sticky BBQ wings took a little while longer to reach us, but they were an instant hit. Just the right amount of tangy sweetness and crispiness, they were devoured as soon as they landed on the table. 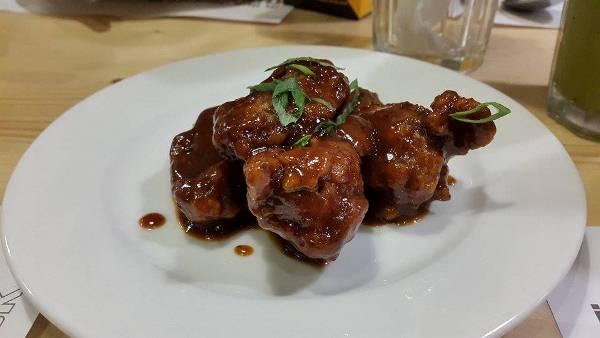 The only disappointing factor in the trio of appetisers was the chicken tom yum soup. The general consensus on our table was that it was watery as compared to the usual tom yum soup. I personally felt it was too strong on the spice – it tasted like red chillies dissolved in water.

Moving on to the main courses, my favourite dish was the Pan Asian rice noodles. Succulent and soft noodles with stir fried vegetables and the spices on point, it proved to be a refreshingly different dish. 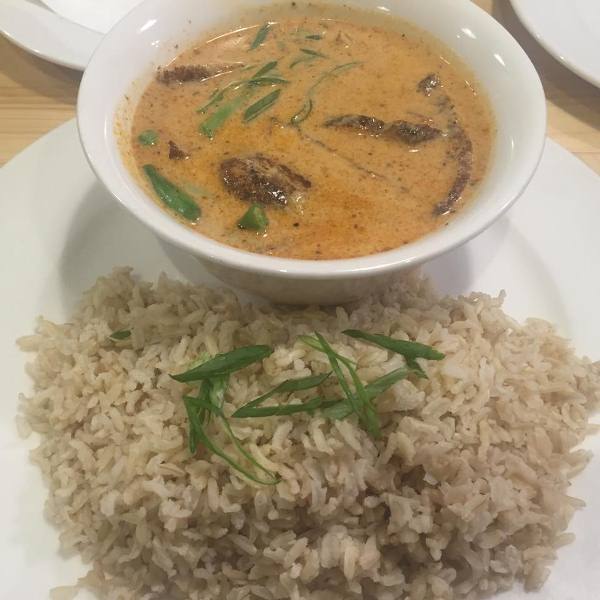 The Thai green curry was a tad bit sweet and had a stronger taste of coconut milk as compared to the red curry. If rated, it would be an average dish, overshadowed by its compatriot, the red curry. 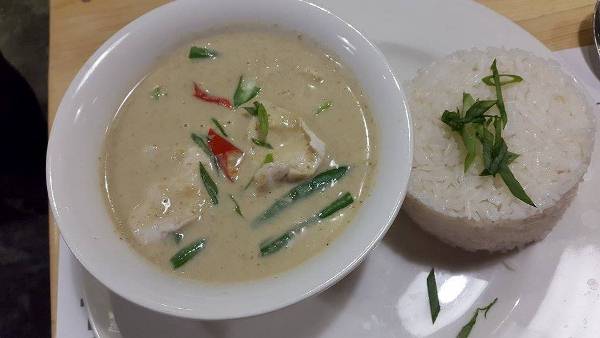 The Nasi Goreng seemed like a rich dish, with a fried egg perched on top of a mound of rice, served with crispy crackers. It was flavourful and filling, though it was overpoweringly spicy. The idea of the egg may not appeal to everyone, but it definitely complements the dish perfectly.

For those who love sea food, they’d definitely enjoy the prawn and calamari dish. The prawns were cooked to perfection and it had the right amount of spice. The downside of the dish was that the calamari was slightly undercooked and the rice quite dense. 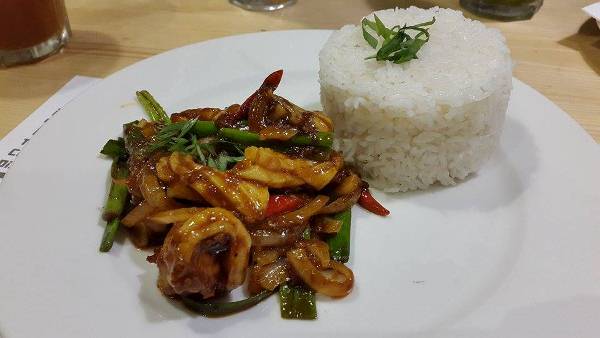 The black pepper beef was delicious. No complaints at all. The Vietnamese sauce complemented the beef well. And compared to the other dishes, it wasn’t as spicy. Another win!

Considering the fact that Chop Chop Wok is mainly a take away, it’s heartening to see the amount of effort the staff put in the presentation of the dishes, allowing all the dishes to come off as visually appealing. 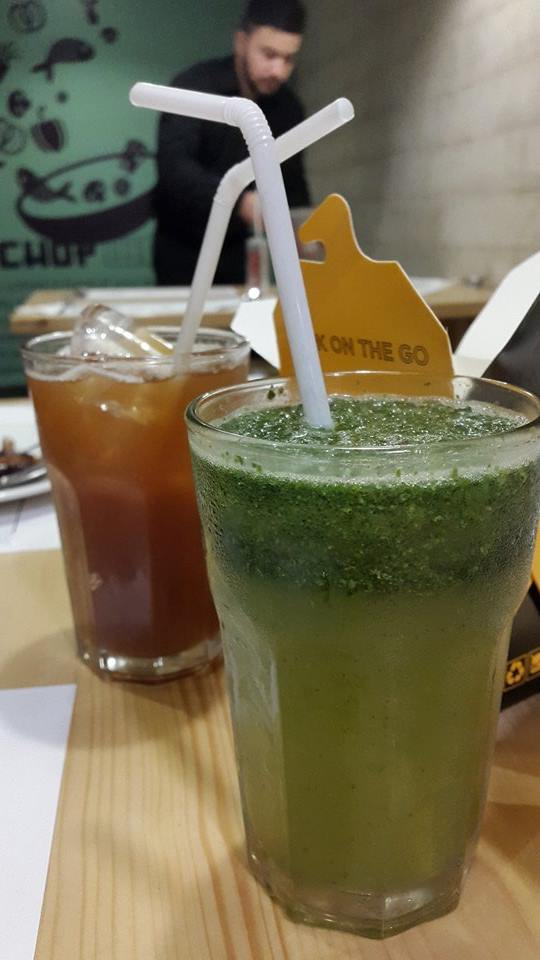 On a scale of one to 10, I’d give it a a fair seven. Chop Chop Wok is a new born baby and it will definitely take time to make its place in the market, but with the booming success it is currently witnessing, the prospects seem bright.

If I had an insatiable craving for oriental food, I’d definitely drive all the way to Khadda Market for a fix of sticky BBQ wings and Pan Asian noodles.