Is your bakra a terrorist? 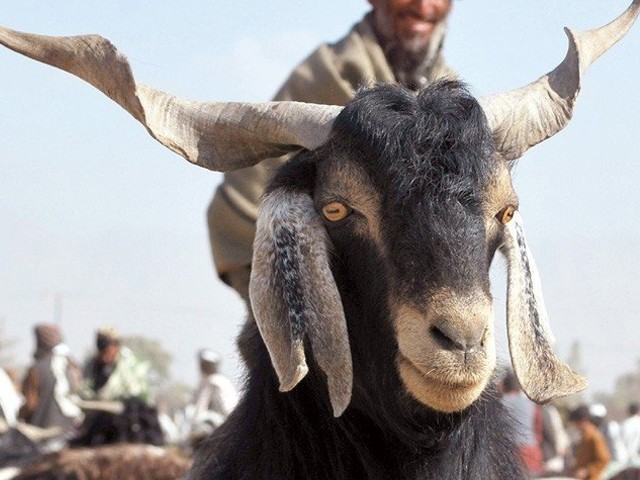 Little did you know that the bakra you just purchased was not only ridiculously high priced, it could even posthumously become a terrorist. PHOTO: AFP

A week ago or so you were perhaps meandering in the bakra mandi; looking for the perfect specimen to take home. You inspected 20 plus bakras, clutched each animal’s jaw to find out if your bakra-to-be has two or four teeth and sturdy horns – sharp enough to butcher other bakras in the mandi. You inquired about the weight of half a dozen cows, and went to check out that one camel in the neighbourhood also.

After loitering around, you finally got down to business, put on your crafty airs and negotiated a deal. You walked out of the mandi with a strong looking, cinnamon dusted bakra. As you strode out, gloating about your shrewd bargaining tactics, the bakra wala sniggered as he counted your money.

Little did you know that the bakra you just purchased was not only ridiculously high priced, it could posthumously even become a terrorist.

Every year, you carry out your qurbaani with heartfelt zest, spend your halal money fattening up your beloved bakra, who has been christened with a ridiculous name like Bubbar Sher or something, and when it’s all done and the meat is simmering away in pressure cookers, you hand out the cinnamon dusted skin of your animal to the man at the door who promises that Bubbar Sher’s remains would be used to facilitate so-and-so madrassah.

You ardently summon him with your hand and urge the man to take the hide off your back. Your mouth is too full of kaleji to inquire further, and frankly, you just don’t care.

This is where most people in Pakistan exhibit blatant ignorance when it comes to qurbaani.

The truth is that every year millions of animals are sacrificed during Eidul Azha and the skins that are acquired make up for half of the country’s leather exports. Pakistan’s leather industry is a prosperous enterprise and has the capacity to churn out huge profits.

Falah-e-Insaniyat Foundation (FIF) is one organisation, for example, which has been heavily involved with the collection of animal hides. It is also known to be associated with the Jamaatud Dawa – a militant group with strong links to the Lashkar-e-Taiba (LeT).

The FIF is known for collecting nearly 100,000 animal skins every year. In 2009, the organisation raked in profits as high as 100 million rupees. If used for the purpose of terrorism, that’s $1.2 million worth of bombs, guns and military arsenal. Think about that before you offer your holy sacrifice.

Where do you think all that gun powder will accumulate?

In your backyard, in the streets of your cities, in your towns and villages. Chances are that your animal skins have ended up paying for the atrocious endeavours of many militants.

There is a blemish on your check book and it screams of terrorism.

How long will you stay ignorant?

It’s not just one organisation, there are many other religious and political factions that are arduously waiting for Eidul Azha. The most prominent political force of Karachi; is also the hegemon of the sacrificial animals’ hides collection – gaining possession of 70 per cent of the total hides. The city alone witnesses the sacrifice of one million animals at the very least, thereby enabling the party to collect up to 0.7 million hides. With each cow hide raking in approximately $50 and goat hides raking in $5–$8 per piece – sorry to jog your fifth grade Math a little, the party makes millions, simply through your ‘worthless’ animal hides.

Those supporting the party are perhaps oblivious of the fact that the millions they helped raise, is also supplementing the party’s militant wing. The extortion cases, street crimes, stuffing of bodies into gunny bag incidents, target killings, increasing weaponisation of Karachi – all the ills the Karachi dwellers are fed-up of, are because (inadvertently) you were financing them.

I see those facial muscles tightening.

Legitimate charity organisations are also able to garner a considerable number of animal skins, such as the Edhi Foundation and Shaukat Khanum Memorial Cancer Hospital & Research Centre (SKMH). The SKMH was able to collect 50,000 animal skins in 2013. The number when compared to the large amount that the dubious charity organisations are able to collect, is rather shocking. An official from the Edhi Foundation in Islamabad, Mohammad Rashid asserted that,

“It’s hard to compete because they have more manpower from all their religious seminaries. They send all their students out to the streets, to volunteer.”

The organisations that truly deserve your help are suffering as a result of the public’s blissful ignorance. The truth is that they do not have significant political clout to gather animal skins from the remote areas of central Punjab and interior Sindh, where other militant organisations have considerable influence.

The government has not taken any definitive action to stop banned outfits from collecting skins. Only Peshawar has exhibited real agency in the matter. The city requires NGO’s to undergo registration, in order to engage in the collection of skins. It has also disallowed the establishment of collection points within the premises of the city. Moreover, the use of loudspeakers to rally people to donate has also been prohibited.

If Peshawar has taken such strict measures to hinder animal skins’ collection processes by banned organisations, why have the rest of the cities exhibited such blatant dormancy?

The federal government hides behind statements such as “they’ll collect skins anyway”, “we can’t stop them” and “they’re doing it for a good cause”.

Most of our politicians shrug and pretend they cannot do anything. The fact is that these banned outfits have stirred fear in the hearts of many. There’s a very real reason why no major publication in the country speaks about those banned outfits. Do we have to keep relying on journalists abroad to carry stories about our suffering, our people and our land? Are we really that impotent?

Our government’s self-imposed shackles are its safety net. They say and do nothing to avoid altercations with terrorist organisations. You can point fingers at your government officials, blame them and evade your responsibility too. That would allow you to get back to the kaleji sooner. However, before you assume innocence in all of this, remember that your nonchalant attitude could earn millions of rupees for those terrorist organisations, however a little vigilance could cripple them.

Of course, the government’s claims seem fallacious but we can’t disregard the fact that some of these banned organisations are inexorable because they keep resurfacing under false names. I’m not eradicating the possibility of the government hiding behind this defence to shirk responsibility of their wrists, but this makes a greater onus of responsibility reside on our shoulders. The government is accountable for the conscientious collection of  hides of the entire country, but you my friend, are responsible for that hide(s) positioned within the parameters of your house, then why the negligence?

So, this Eid, mix in a little acuity in your busy schedule. Keep your eyes open. Notice things. Know what’s going on. Don’t let your qurbaani become an asset to terrorism.