Pakistan’s Twitterati: The good, the bad and the ugly 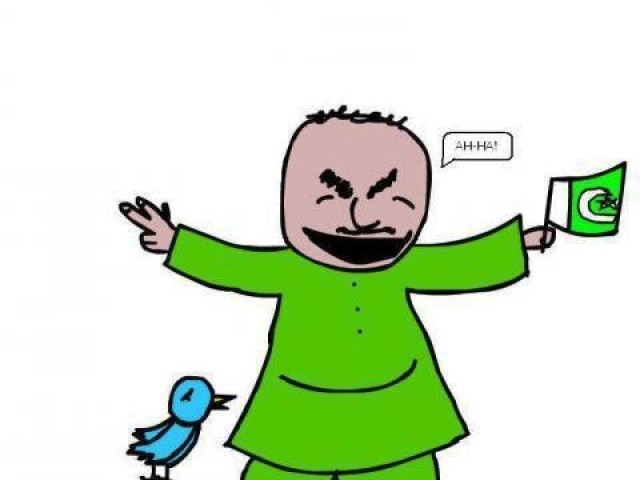 I joined Twitter a few months ago after my friends couldn’t stop whining about my absence on the social network. Time passed by and I gained recognition for my pseudo-humour. People followed me and I followed a few of them. The ones that I did hit the green tab on were usually journalists, writers, bloggers or citizens who knew how to use grammar accurately. Then, one day, it dawned upon me: There were several easily-distinguishable types of users in the Pakistani-Twitter sphere. I also noticed how they followed each other almost obsessively and formed mini-clans on the desi world wide web.

However it isn’t just the minor celebrities, bloggers and politicians that the Pakistani Twitterati comprises of. There are passionate stalkers, haters and freaks that keep us entertained. I decided to categorise them so that you may know who you’re following (or unfollowing) on Twitter.

Poetical and philosophical, constantly in search (online) for the answers to all of his questions, Bhatti the Bard is magical with his tweets. He quotes (and consequently ruins) the beauty of neoclassical and modern poetry in a constricting set of 140 characters. When life gives Bhatti a tough time, he signs into Twitter and quotes the first few verses of Hamlet’s Soliloquy and then adds a hash-tag of #Shakespeare to it so that the rest of the world may drown themselves into his tweet. Fifty to sixty people with extremely bad taste follow Bhatti and regard him as Pakistan’s version of Christopher Marlowe.

When I was little, I was fascinated by cults and secret societies with their own logos and codes. That curiosity never evaded me even after I turned 20. So, when I joined Twitter, there were three mysterious men with very symbolic avatars and I always tried to find out what they actually looked like. One was a five rupee coin, the other was a crow and the third was a tea cup. If these three men (no, I’m not a misogynist for cancelling the possibility of them being females; they talk about sports excessively) had been dumb or slipped a grammatical mistake here or there, I wouldn’t have been this eager to rip their masks off. Later on, a blue rickshaw joined them. They all discuss regional and international politics and sports. Plus, they won’t follow you unless or until you sound worth it.

Twitter is not your shrink no matter how cathartic you deem tweeting is. We all are fighting battles and we all know what pain is but Twitter is not going to help you cure your psychological agony. The Constant Whiner floods his/her timeline with tweets about how unfair God rendered their lives. “Ma homewurk suxxx”, one entered. I unfollowed her instantly.

Proudly tweeting about their political party and its objectives in nauseatingly-patriotic tones, this campaigner is a pain in the you-know-what. Thousands and thousands of people follow him and his green and white avatar. I don’t. Why? Well, if you can’t bring a substantial change in my city, I doubt you’ll initiate a revolution online.

This type wins massive appreciation from my side for three basic reasons: 1. They’re women. 2. They’re Pakistani. 3. They’re journalists. Combine these three characteristics and you’re in my list of approved human beings. It’s not very easy to tweet about regional conflicts involving women, sexuality or social equality among a male-dominated network. I’ve seen many male users harass these ladies for speaking their minds and I’ve also witnessed those men having their ass handed back to them gracefully. In simple words: Kudos to you, lovelies.

Her life in the morning sucks, by noon it’s bearable, by evening she’s high and by night she basically wishes the world would give her a foot massage. That world does not contain me, thank you.

A version of this post was originally published here.

An American Pakistani student, blogger and doodler in Lahore. She enjoys writing satire on culture and politics. Mehreen tweets @mehreenkasana.

Bhoja Air crash: Where are our media ethics?

Unapologetic acid attackers: 'She asked for it'

An open letter to Maya Khan