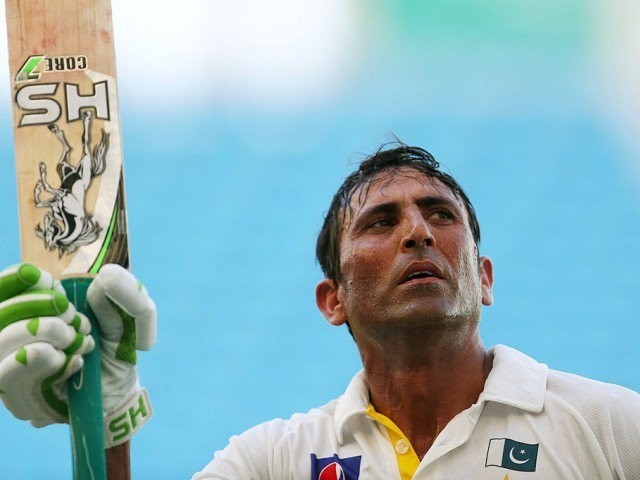 Dear Younus, your Test record is fantastic yet your ODI record is poor. Why do you throw tantrums every time you are dropped from ODI cricket? PHOTO: AFP

I hope this letter finds you well. Let me start by saying that you are, undoubtedly, one of the greatest Test match batsmen Pakistan has ever produced. Your powers of concentration and mental strength are only bettered by Misbahul Haq in the current Test team, while your skills as a stroke-maker coupled with your triathlon-athlete like endurance are a winning combination like no other.

In a sense, you remind me of a boxer who lives for the counter punch.

You, Younus, sometimes take more punches than a middle-order batsman has any right to handle, before you begin hitting back. It starts with numerous jabs in the shape of singles and doubles – which unbeknownst to your adversary do sizable damage – followed by more unorthodox shots such as sweeps and flicks, designed to infuriate the fielding team. Finally, your haymakers take their turn as you drive the leather off the old cherry.

After a long tussle, as was with your incredible 171 against Sri Lanka, you are standing, arms raised, next to a bewildered and weary opponent, who is beaten black and blue after seemingly dominating the bout earlier.

Younus, though I am sure you have guessed where this is going next, it is imperative for you to continue reading.

Throughout your career, there has been a pattern as clear as a quartz crystal for anyone to observe – you find your way into the limited-overs cricket team after some fabulous Test match performances, fail miserably, play magnificently in a new Test series, are dropped from the limited-overs format, throw a childlike tantrum on Pakistani media and emotionally blackmail your way back into the limited-overs team, fail in ODIs again, rinse and repeat.

After the World Cup, Younus, I thought you had learned, but here we are once again.

Once more, you made your way to television and threw another outburst after it became apparent you would not be selected for the ODI series against Zimbabwe. Your statement was particularly immature,

“If I am not selected, the one-day team will not be able to stand up.”

Metaphorically speaking, at the age of nearly 38, Younus, you are a grandfather, and ODIs are discos. Grandfathers do not belong in discos. Those who come in are recognised as the creepy old guys the girls avoid in the club. I am sorry Younus, but there are not enough drinks in the world to make you look attractive in a disco.

And please stop comparing yourself to Misbah. He’s George Clooney, while you are George Costanza. Age was never a factor for him, because he can boogie like the best of them.

In regards to your statement, first of all, it is not like the ODI team has been standing on its own two feet with you in the team. After 264 matches, your batting average stands barely above 30. Meanwhile, your strike rate hovers in the mid-70s. By modern cricketing standards, or even standards from a decade ago, this is unacceptable for ODI cricket.

Age doesn’t matter if you can perform, and your ODI statistics tell a depressing story.

Let’s talk about the World Cup in Australia.

You threw an infantile tantrum before the World Cup, Down Under. Back then, you threw a public fit, after which you were prolific in the Test series against the Aussies in the Middle East. Against their better judgment, and under severe pressure, the selectors let you, the old war horse, back into the ODI team. The casualty was Fawad Alam, a cricketer with a phenomenal ODI record, especially when compared to yours. At the very least, your selfish behaviour cost a young man his job.

As we all feared and predicted, you struggled throughout the World Cup. No one can dispute your valour, coming up the order was no mean feat. However, you were dropped after your most diehard fans gave up on you. Your best performance was against South Africa where you were fortunate to play the part-timers for your score of 37. Nothing would have given your fans more pleasure than to see you perform well in ODI cricket, but enough is enough.

All the goodwill you had built up after a fine Test performance was lost in the blink of an eye. And here we are again. At your age, with the next World Cup four years away, it makes even less sense for you to take the place of a young cricketer in the side, yet you are hell bent on sullying your legacy.

Younus, somewhere deep inside, I am sure you are quite aware how your counter-punch style of cricket is not useful in modern ODI cricket, yet in your stubbornness you continue to wear bellbottoms in 2015.

Why would you say the team will collapse in ODI cricket without you? Aside from the delusion that your limited-overs cricket is vital to Pakistan’s fortune in the format, you are undermining the morale of the team to pressure the selectors. Is there anything more selfish than that?

Like others, I was cautious when Azhar Ali was announced as captain, yet I must commend him on his fantastic personal performances as an ODI batsman. What’s more, though his captaincy hasn’t been off to a perfect start, he’s clearly growing in his role.

It is imperative other cricketers support Azhar, yet after he was installed as captain, you continued, like a greedy man who feels like his meal was stolen from him, to make statements in the media expressing your desire to become skipper. Younus, you divorced your captaincy, and it doesn’t want to marry you again.

Younus, how would Azhar feel as new ODI captain when a senior player continues to express his hunger for leadership rather than backing him? Why are other countries such as Australia, South Africa, and India able to select young leaders who are often in their 20s, yet we can’t give the role to a 30-year-old man without his senior players openly coveting his job? Whereas the senior players of other nations back their young leaders, our experienced men lack the grace to let others have the limelight.

Get it in your head. Azhar is the the new ODI captain and the next Test captain.

As for the Pakistan Cricket Board (PCB) debacle, they may have been to blame, but you have had your chances. There is no doubt our cricket board has a history of callousness. They should have personally invited the great cricketers of the nation rather than mailing them invitation cards to the Pakistan Super League ceremony. But if you felt disrespected by them, you are doing worse for yourself now.

You say they never asked you to come, but they say this is simply not true. At best, it seems like a misunderstanding. Why not resolve the matter with them privately before starting another public circus?

If you can’t listen to your fans, then please heed the council of your fellow greats.

Even Wasim Akram has asked you to concentrate on what you know best,

“I would advise him to stop worrying about playing the ODI format.”

Yet you responded by asking him to mind his own business,

“I respect him a lot he is a legend of Pakistan cricket. But I think he should not bother or worry about me. Because after 15 years of international cricket, I don’t think I need to take anyone’s advice to decide what to do about my career.”

Younus, you misunderstood. He wasn’t advising you, rather, he was pleading with you to maintain some dignity. You are a dolphin. Swim in the sea. Leave this tree climbing to squirrels. Let them go nuts.