Pakistan Super League: The right people for the right job at the right time 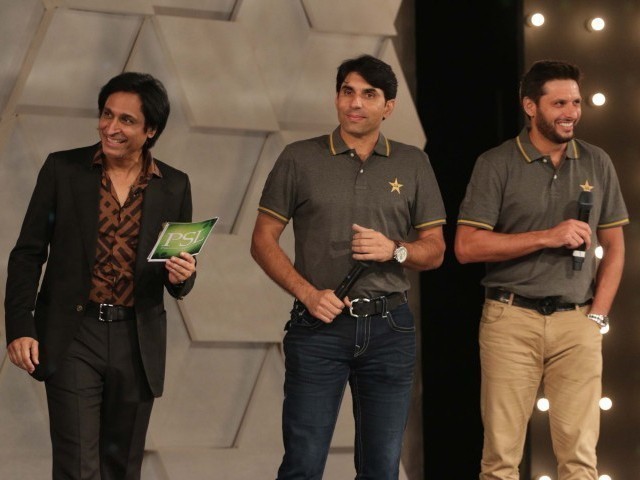 Ramiz Raja stands on stage along with Misbahul Haq and Shahid Afridi at the PSL launch ceremony in Lahore on September 20, 2015. PHOTO: SHAFIQ MALIK/EXPRESS

By now everyone knows that the Pakistan Cricket Board (PCB) is planning on conducting its first ever international tournament in UAE, the T20 Pakistan Super League (PSL), which will be played from February 4 to 24,  2016. The logo launching ceremony was held on September 20, 2015 and a star studded dinner announcing the commencement of PSL was held in Lahore last week, suggesting that PSL activities are in full swing already.

Apart from these two, various big names have expressed interest in taking part in the tournament, such as Chris Gayle and Sunil Narine.

The presence of these mega stars will not only boost the confidence of the organisers, but will also motivate the players to start working on their fitness levels and other skills to be able to be at-par with these stars whilst playing alongside them in the mega event.

Although PSL is going to be a tournament comprising of five teams – Peshawar, Lahore, Karachi, Quetta, and Islamabad – and only 24 matches will be played, it has a huge significance for a small board like PCB, which is going through a difficult phase financially as they have only managed to host one home-series since 2009.

Furthermore, observing the National T20 tournament organised by PCB every year does not do much good for our players. The Pakistani batsmen hesitate to innovate, are less prone to risk-taking, and less eager to open up unique scoring opportunities which is the reason why Pakistan remains one of the three teams which haven’t yet scored 400 in an ODI and stand as a team known for lower run rates in an era of high scores.

By competing against the likes of Glenn Maxwell, Mahela Jayawardene, and Martin Guptill who are renowned for their modern techniques, hopefully they will try to imitate them and add a new dimension to their conventional batting.

However, it is important for PCB and our media to realise that it is far too early for PSL to be compared to Indian Premiere League (IPL) – the mega league organised by Board of Control for Cricket in India (BCCI) every year, also known as the biggest cricket league in the world. In doing so, it might lead them out of bounds and take the focus away from the core activity – which is to organise a tournament matching international standards.

Hence, the successfulness of PSL is inevitable. By the looks of it, PCB seems very optimistic and motivated about it. Naming the Pakistani legends Wasim Akram and Ramiz Raja as the ambassadors ensures that the league is in the hands of the right people who know what it takes to make these sorts of leagues successful.

At this stage, appointing the right people for the right job should be the main focus of PCB. A proper plan of transparency should be setup to ensure that the league is clean of any corruption, which seems like the only threat to this project at the moment. Furthermore, PCB should make sure the rights of every stakeholder involved –  the players, coaches, administration, broadcasters, sponsors, are taken into the account.

Rest assured, the league is going to be a great success and will play a leading role in bringing cricket back home.

The author is a business graduate, the owner of SH Sports Events, Former Captain of Maazullah Khan Cricket Academy Peshawar and Edwardes College Peshawar and Institute of Management Sciences, Peshawar. He tweets as @S_khan91