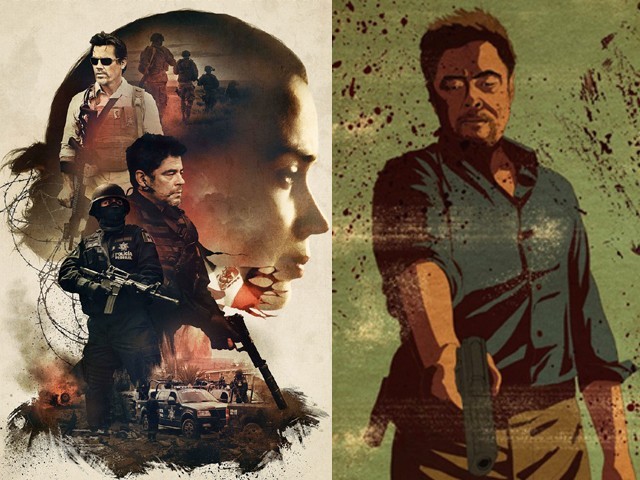 From the explosive opening scene, Director Denis Villeneuve has our attention and throughout the course of the movie. PHOTO: IMDb

Set against the vapid and treacherous backdrop of the US-Mexican border, Sicario takes us into the dangerous world of drug trafficking, as seen through the lives of covert ops who aim to put an end to it or at least deescalate it.

FBI agent Kate Macer (Emily Blunt) is assigned to a special government task force spearheaded by a shady government agent, Matt (Josh Brolin), to help bring down the ever escalating war on drugs. However, when Kate finds out that there’s much more to the mission, and her mysterious team member Alejandro (Benicio Del Toro) compared to what she was told, things start getting complicated and she begins to question her moral grounds and the mission she is a part of.

Ever since Steven Soderbergh’s Traffic has gone into the depths of cartel trade, similar movies have been made. On the other hand, Sicario isn’t just a gritty exploration of cartel trade, but also a film with a very unique and shady moral conscience that keeps us thinking every step of the way.

Sicario follows on the visceral style of storytelling, which director Denis Villeneuve previously delved with both Prisoners and Enemy, but Villenueve’s way to create tension, suspense and some genuinely exhilarating set-pieces are impeccable to say the least.

From the explosive opening scene, Villeneuve has our attention and throughout the course of the movie, he engrosses us more as he stages one gut-wrenching scene after another, while also providing moments of restraint and mood. A lot of the credit goes to the excellent support he gets from Taylor Sheridan’s focused and sharply scripted screenplay, as well as the trio of fantastic performances from Blunt, Brolin and Benicio.

Emily Blunt building on the promise of Edge of Tomorrow does great as an idealistic FBI agent, bringing both the vulnerability and subtlety to her performance. Josh Brolin sits at the centre chewing gum in the best way – the cool-headed government agent injects some much needed levity comic relief into the film. But ultimately, it’s Benicio Del Toro who steals the show in a wonderfully understated but charismatic performance as the enigmatic Alejandro.

Furthermore, kudos to the technical brilliance of this movie, most of which goes to the veteran cinematographer Roger Deakins. Deakins does an absolutely magnificent job behind the camera, turning even the bland and lifeless terrain of the US-Mexico border into a picturesque and gorgeous panorama radiating with colours. At the same time, Johann Johannsson’s edgy and jittery original score is so integral in capturing the mood of the film.

If there’s any area where Sicario falls short, it’s the somewhat sluggish second act where there seems to be an abundance of exposition, when in fact, the film’s strong point is the lack of exposition and rather the visual approach to storytelling employed by Villeneuve. Thankfully though, the film more than makes up for this misstep in superbly orchestrated final act.

Gripping, taut and powerfully performed, Sicario emerges as one of the best films of the year, providing a haunting take on the war on drugs, as well as a showcase for respective talents of director Villeneuve and actor Benicio, both of whom seem to be at the top of their game.