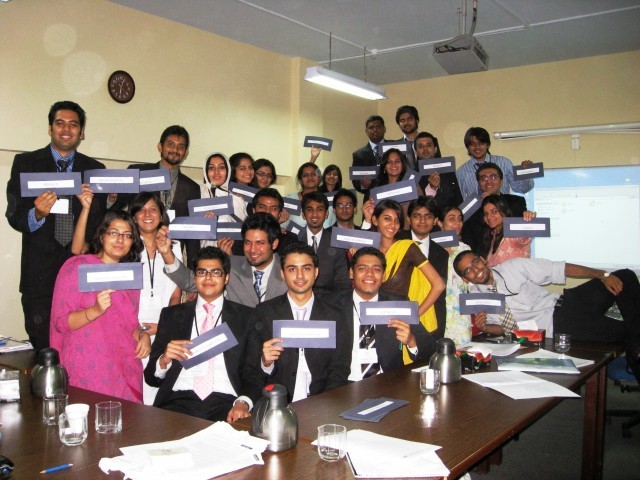 Delegates at one of Pakistan's local university MUN conferences, ZABMUN.

The plague of Model United Nations (or MUN, an abbreviation that makes the idea sound slightly more worthwhile) has gripped most institutions in the country.

For those few of you who are unfamiliar with the concept, MUN is an event where students represent different countries and stage a United Nations meeting. They supposedly ‘discuss’ world issues, propose solutions and argue with each other over the share of resources – little else is achieved in this process.

Some of its supporters may argue that this platform is an excellent way of making the younger generation take an interest in current affairs. But essentially, we are breeding the same type of pointless leadership that has been running the real UN so far.

The more important issues in the world, it seems, are left untouched. Take, for instance, Palestine and Kashmir, where people have been suffering the brutalities of unjust occupations for years. The UN, it appears, has its hands tied.

What is interesting to note is that the same concept of discussions, at the cost of taking action, trickles down to the foundation of these MUNs. The comfort of the delegates and the social events take a higher priority to attending sessions.

Delegates not only manage to visit different cities but the luckier ones also visit other countries. Amidst the travelling, policies regarding the issues take a back seat and what is left is a sort of ideology that grips the UN.

Before I am judged for my biased views (which I admit, because many a time have LUMUN delegates trashed our university campus), this is what the Harvard MUN 2011 will be all about: “HMUN 2011 will feature innovative committee simulations, cutting-edge technology, and, of course, great entertainment for the delegates outside of the committee”.

I couldn’t help but notice that nowhere on this website was it mentioned what these conferences have managed to achieve. Have any of these ‘mock’ diplomats ever made worthwhile suggestions that may have helped one of the many problems in our society. If yes, feel free to prove me wrong. If not, stop with the nonsense already.

'Professor sahab, please help me get in to college'