He was just a kid who made a clock, America 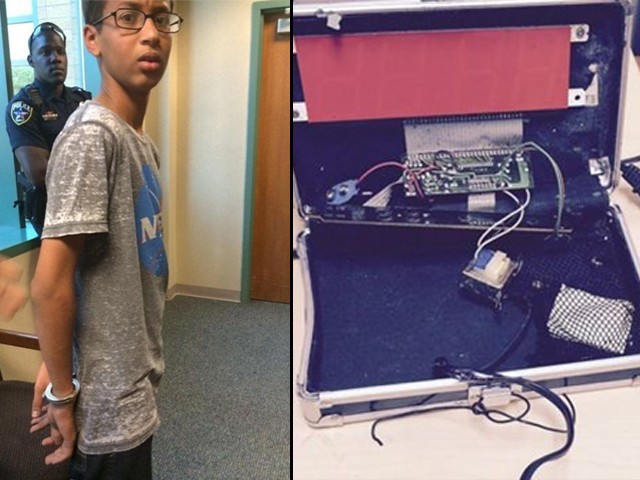 Police said Ahmed Mohammed was arrested for bringing a "hoax bomb" to school. They provided this photo of the homemade clock. PHOTO: TWITTER (@anildash)/REUTERS

It has been 14 years since the Twin Towers in New York City were attacked – 2977 Americans died that day and thousands were injured. Soon after, the United States of America launched a full-scale offensive against al Qaeda in Afghanistan, under the name of ‘Operation Enduring Freedom’. That operation lasted 13 years. American forces invaded Iraq as well, for around a decade.

Twenty thousand civilians and 6,000 security personnel have perished since 2003 in Pakistan. A grand total of 210,000 civilians have died, once you include the staggering numbers from Afghanistan and Iraq. Women, children, and unarmed men. What number is enough to stop calling it ‘collateral damage’?

But everyone knows the first rule of politics. All politics is power politics. And perhaps it is in this rule that the rest of the rules about humanity and justice somehow lose their way.

Just recently, the New Yorker published a feature in which a Pakistani family was accused of financing terrorists. A small time mosque’s Imam, Hafiz Khan, was arrested along with his family. The federal authorities claimed that the family was guilty of ‘funnelling tens of thousands of dollars into a conspiracy to murder, kidnap or maim persons overseas’.

After a lengthy court battle, the feature states, the lawyers and judges found the case against the Imam weak. His family was acquitted of charges but they find it difficult to go back to their normal lives – they lost their jobs, their homes, and almost ended up living on the streets.

In the long haul to bring actual perpetrators and fundamentalist/terrorists to justice, these stories become footnotes. Perhaps they may provide to be ample fodder for social media/activism outrage but they are soon forgotten. The actual dialogue about racism, Islamophobia and gun control laws in the United States are fogged either by hard-core Islamists (who really don’t help the matters for peace-loving, hard-working, honest immigrants from Muslim countries, for whom the maximum amount of jihad is fighting the temptation to eat a jelly doughnut) and Islamic rights groups who like to exploit petty instances for their own benefits, or by right-wing gun nuts and white supremacists who want ‘dotheads’ to ‘go home’ and continue marginalising anyone who isn’t worshipping at the altar of Donald Trump. Somewhere between these extremes, Ahmed Mohamed stood in handcuffs at MacArthur High School in Texas.

Why is it that when a lone white gunman who kills multiple innocent people is considered ‘mentally deranged’ but a young Muslim boy is arrested because he made a clock. Another young white American boy made a nuclear reactor and was offered a research grant and help from the US government. How and why, after 9/11, Patriot Act, and the invasion of Afghanistan and Iraq, the debate of freedom and justice suddenly became as murky as it is today? 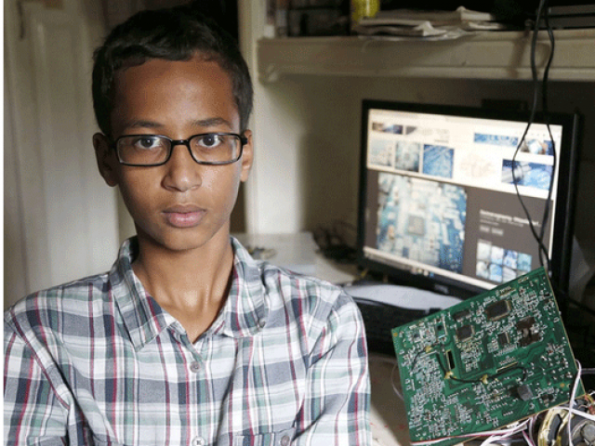 The teenager was handcuffed and taken to police headquarters and was not allowed to call his parents. PHOTO: The Dallas Morning News

The long and short of it is that America has a racism problem. For a country that stands on immigrants itself, for a country that has had no history or existence except for the one that various immigrants gave it, it has had a frightening history of racism against African-Americans and now against immigrant Muslims.

At this point in time, I hate to point out the obvious but just like not all Americans are not insane and ready to kill themselves and their girlfriends and everyone in their vicinity just because they feel like it, every Muslim is not ready to explode for the sake of 72 virgins in heaven.

The debate needs sanity from all sides, maybe even more so from Muslims who need to clear their positions about terrorism and need to stop being offended at every criticism that is thrown their way, not because the criticism is always justified but because tolerance is essential to pave the way forward. The ‘off with your head’ mantra cannot work for Muslims anymore if they want to remove the misconceptions and confusions that exist in opposing groups.

The American society and justice system, on the other hand, needs to recognise Islamophobia is a legitimate and criminal act that is pushing innocent people into a corner and doing more harm than good. It continues to be appalling that when Ahmed Mohamed was brought up in the GOP (Grand Old Party) debate, participants wilfully avoided the topic and managed to avoid addressing anti-Muslim bigotry.

America prides itself on justice and equality. The kind of provisions the Bill of Rights gives to the American citizens is unparalleled to any other country in the world. United States gives maximum freedom of speech to an individual. It provides the maximum rights to individuals for their religion and for press and the right to assembly. The United States is an example for the evolving justice systems everywhere else in the world. When developing countries form laws and set discussions in motions, lawmakers often look towards the United States and the precedents they have practically set for law and order.

Yet incidents like Ahmed Mohamed only serve as a shadow on the reputation that America’s founding fathers have built for the sake of the American legacy. It will do well for Republicans to remember that the same set of laws that allow them to lobby for gun control also lobby for full rights and equality for citizens of the United States, quite incidentally Muslim immigrants such as Ahmed Mohamed.

Here is what Ahmed had to say:

On a more positive note, it was heartfelt to see that Mark Zuckerberg invited the 14-year-old to visit the Facebook office. Even staunch atheists such as Sam Harris and Richard Dawkins tweeted #IStandWithAhmed, along with Hillary Clinton and the Google Science Fair.

.@Thalwen @RichardDawkins What delightful trolling! But, needless to say, #IStandWithAhmed.

Hey Ahmed- we're saving a seat for you at this weekend's Google Science Fair…want to come? Bring your clock! #IStandwithAhmed

Offering for a collaboration, Aaron Levie, CEO of enterprise cloud company Box, and Carl Bass, CEO of the software firm Autodesk, extended their invitations as well.

Ahmed, I know you've been invited to the White House and Facebook. But, we both know you're enterprise software guy at heart. Come by Box!

Ahmed, don’t let this stop your creativity. Come hang out at Autodesk and we’ll make something new together. #IStandWithAhmed

These are all definitely steps in the right direction and important occurrences in reducing Islamophobia and prejudice against Muslims. President Barack Obama tweeted asking for Ahmed to visit the White House.

Cool clock, Ahmed. Want to bring it to the White House? We should inspire more kids like you to like science. It's what makes America great.

Yes it does, Mr President. And we hope that the next time your law enforcement agencies go nuts with racial profiling, they remember Ahmed Mohamed and this fantastic quote by Friedrich Nietzsche,

“Whoever fights monsters should see to it that in the process he does not become a monster. And if you gaze long enough into an abyss, the abyss will gaze back into you.”