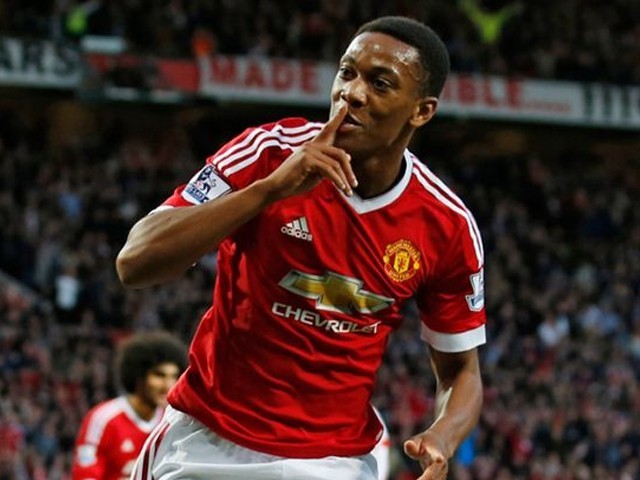 When it comes to making memorable debuts for Manchester United, you think back to Wayne Rooney’s hat-trick against Fenerbahce SK and Federico Macheda’s injury-time winner against Aston Villa.We can now add Anthony Martial to that list after his wonderful goal which helped United seal a 3-1 victory over bitter rivals, Liverpool.

Rooney and Michael Carrick admitted they had barely heard of him before.

2. A panic buy due to the paucity of options upfront bought for an absurd fee.

3. The next Thierry Henry?

Titled so for his style of play as the similarities in geographical upbringings.

Come Saturday full-time and the football world knew an awful lot more about the youngster all of a sudden. It took him a good few minutes to get his first touch when he replaced Juan Mata from the bench. But the youthful endeavour was clearly seen when he wrestled the ball back from the more experienced and physical Dejan Lovren to eventually win a free kick.

Yet it was the goal that he scored with such confidence and skill that caused elation across Old Trafford and beyond. The remarkable resemblance with a goal Henry once scored (also against Liverpool) did little to quell comparisons with the legendary Frenchman. It was the first time a debutant had scored under Louis Van Gaal for United, perhaps a good omen.

True, a preposterous sum of money was paid that resulted in the 19-year-old becoming the world’s most expensive teenager. But one could argue that the £12.24 million paid for an 18-year-old Cristiano Ronaldo in 2003 by the same club to Sporting Lisbon was an unusual fee back in the day too.

Red Devils manager Louis Van Gaal had a point too when he stated last week that,

“There is a market price and we cannot have any influence on that price.”

Even if there is a touch of uncertainty over how long players at Carrington can be mechanised with endless drills of possession instead of expressing themselves with flair and freedom, one must admire the fact that the Dutchman is arguably building a team for his eventual successor – Ryan Giggs or whoever that might be – with a fine blend of youthful and middle-aged players.

Luke Shaw, Memphis Depay, Andreas Pereira and of course Martial himself are not older than 21. Morgan Schneiderlin, Ander Herrera, Matteo Darmian, Chris Smalling (who has vastly improved under the 64-year-old’s watch) and Daley Blind are in their mid-20s. Add to that a sprinkling of experience with the addition of Bastian Schweinsteiger and the senior role Carrick has acquired in the dressing room and you have an interesting mix.

Martial could provide his new club with the pace the 20-times English Champions badly need and have sorely lacked lately. After Angel Di Maria’s departure in the summer, Martial and fellow newcomer, Depay, are arguably the only two attacking players in the side at the moment that have the speed to trouble defenders in England.

Far too often, United have been guilty of pedestrian play that is particularly ill-suited to the fast and furious style of the Premier League. With Rooney having lost some of the electricity of his youth, the endless possession in midfield has rarely found an end product. Unsurprisingly, the slow pace upfront has not stretched defences that have been happy to sit back and let their opponent keep the ball outside the danger areas.

But if Martial and Depay can become the new talented young duo in United’s attack to emulate Rooney and Ronaldo earlier, then opposition defenders will have a handful to deal with in every game surely.

Martial offers United a different dimension upfront with his explosive speed and a keen eye for goals. Regardless of the pressure his fee and age have placed on him, the coming months will surely be exciting to watch the career of one of Europe’s most talented young forward develop.

In the short term, the forward eased the pressure on the home team after Christian Benteke’s stunning overhead kick pulled a goal back for Liverpool. In the long term, it could turn out to be a bargain purchase if first impressions are indeed last impressions.