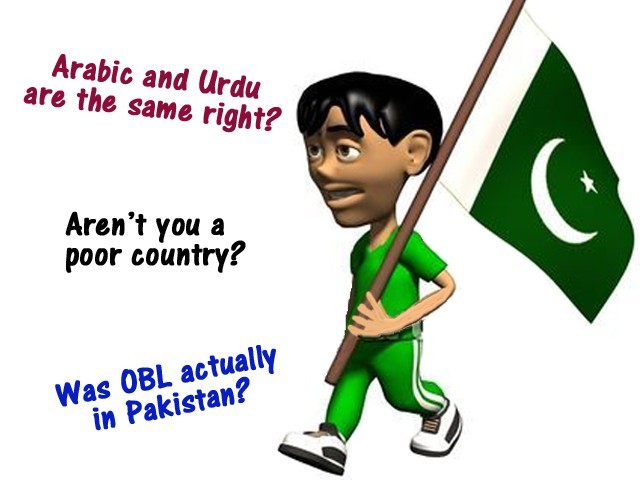 There is a distinct need to set the record straight and inform the international community.

A Pakistani living abroad has to battle with numerous stereotypes. It has been a year since I moved to Australia and I still get heckled by people’s pre-conceived notions about where I’m from. It is not just because I am from Pakistan, a country plagued by terrorism and corrupt regressive regimes, but also because Pakistan is considered to be a religiously extremist country.

There is a distinct need to set the record straight and inform the international community that Pakistan is a lot more than what they have assumed it to be.

I want to address some of the questions that were thrown at me so that the rhetoric surrounding Pakistan does not remain strictly one-dimensional.

Yes, Pakistan is poor. However, it is rich in certain domains.

Pakistan is the first Muslim state to acquire nuclear arsenal. It has built the highest paved international road known as the Karakoram Highway. Pakistan’s deep sea port is included in the 100 busiest container ports of the world. It manufactures 60 million hand sewn footballs for the World Cup in a year. Pakistan has the world’s second largest salt mine that stretches to 18 working levels  and 40 kilometres of tunnels, and the fourth largest irrigated land area after China and the US.

So, you see, don’t judge a book by its Gross Domestic Product (GDP).

A worker applies adhesives to the edges of a design on a football ahead of the FIFA World Cup 2014 in Brazil at a factory in Sialkot. PHOTO: AFP

2. I want to visit Pakistan but I’m scared I’ll get killed

Indeed the security situation in Pakistan is discouraging. However, once you visit, you’ll see for yourself how hospitable the people of this country are. This is because hospitality is tightly woven into Pakistan’s cultural values. Just ask Brandon Stanton of Humans of New York about his experience in Pakistan.

3. So Arabic and Urdu are similar, right?

No, they are not. Urdu may borrow some Arabic words just like Japanese borrows some words from the Chinese language, but they are completely different languages.

Urdu is a blend of Persian, Turkish, Arabic, and some Sanskrit words and is an amalgamation of Indo-Aryan languages. Pakistanis have a strong emotional attachment to Arabic because the Holy Quran is written in it. The language itself is more prevalent in the Middle East and South Africa.

4. How is your English so good?

Pakistan was a part of the Indian sub-continent which was a British colony for a century. Although the subcontinent was decolonised 67 years ago, Pakistan and India have not been able to shake off the hold of the English language. There’s a strong emphasis on English in the education sector and in the professional arena. Islamic studies itself is taught in English in O’ levels. It has now become a representation of class.

The educated and well-off section of the Pakistani population is closely associated with English while the uneducated and poor people of Pakistan do not have access to the language.

This is tantamount to a Pakistani asking Americans if they actually planned 9/11 with al Qaeda or were they in Bill Clinton’s bedroom with him and Monica Lewisky before they admitted to the relationship? Our knowledge of OBL’s presence in Pakistan is as good as yours – through the mainstream media. Off the record, Pakistan’s establishment would have known of his presence and kept it a secret just as America had the right to throw the most wanted terrorist’s body into the sea without sharing a single proof of this whole exercise.

6. Are women allowed to go out?

Although there is a distinct difference between the lives of urban and rural women in general, not all women in Pakistan are suppressed. In fact, many women are not just allowed to go out but also drive, work, and have equal rights as men. Did you know that Pakistan has female fighter pilots?

Ayesha Farooq is one of the few brave women who are serving the nation as part of Pakistan’s Air Force. Women in Pakistan tend to the sick as doctors, fight for the right to education, win Nobel laureates like Malala Yousafzai, surmount the highest peaks of the world like Samina Baig, play their part in the civil society at the cost of their life like Sabeen Mahmud, uphold democracy like Benazir Bhutto, and are cultural ambassadors, artists and musicians like Noor Jehan, Iqbal Bano and Nayyara Noor. All this and they are the best mothers, daughters and sisters in the world.

In conclusion, I would encourage the international community to not look towards bigoted news agencies such as FOX News to gather information regarding Pakistan. In fact, you should get to know Pakistan without the shackles of mainstream stereotypes. Pakistan and Pakistanis have a lot more to offer than what is portrayed about them.