No one paid heed to the strike call. Is MQM losing its grip on Karachi? 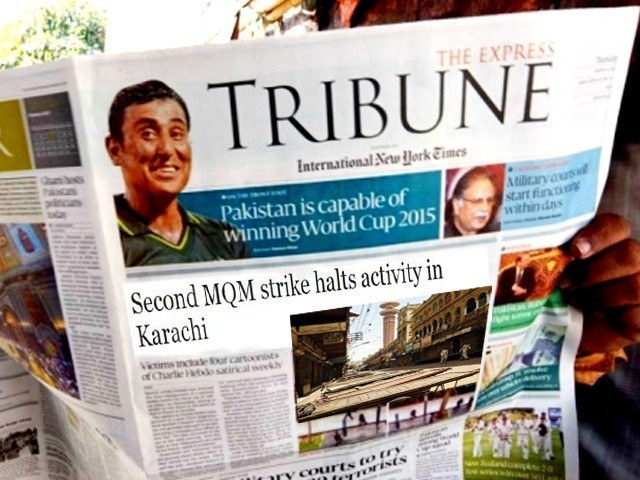 It was as if the stern teacher had asked the students to head back to the classrooms, and for once the students did not pay heed.

Not too long ago, at the call for a citywide strike from Muttahida Quami Movement (MQM), Karachi would have launched into a panicked frenzy, storekeepers would have shut down their business, cars would have lined up at petrol pumps, even those with full tanks (because that’s how we roll), schools would have closed early leaving both children and their parents scrambling for home, roads, buses, and, cars would have become the victims of anonymous perpetrators, flowers would have wilted, young lovers would have cancelled their dates at the park, opting for Skype instead, housewives would have cooked strange tasting curries because the dahi wala (yogurt shop) had gone back home, people would have had lunch with double roti (bread) because the chapatti wala was suddenly on vacation in Honolulu.

To put it mildly, hell would have frozen over.

In sharp contrast, I experienced a typical day at Tariq Road this afternoon, roads were teeming with activity, shops were crowded, the traffic signal boys were busy cleaning windshields while the drivers screamed, begged, and cried for them to stop as usual.

When I came to the realisation that MQM had called for a strike today, I was in shock. It was as if the stern teacher had asked the students to head back to the classrooms, and for once the students did not pay heed.

Well, it seems like there is a new principal in town.

According to Samaa, after explaining how four of his party’s workers were tragically murdered, local MQM honcho, Dr Farooq Sattar called for a strike,

“We appeal to the trade, transporter, and schools associations to answer MQM’s call affirmatively.”

Usually, these words would have been as powerful as Ali Baba’s, “Band hoja Sim Sim.”

But today, when MQM tried to log into its account, it found the password had been changed, and the squiggly security code symbols were beyond recognition.

“We cannot allow anyone to bring life in the metropolis to a paralysing halt.”

Just to make sure the message hit home they added,

“You are requested to take Saturday as any other working day. Do not be afraid to continue with your business or other activities. Call 1101 (Rangers Helpline) if anyone tries to force you to close your shop/office down for the day against your will.”

I am not here to pass judgment on whether MQM has been victimised by the Rangers in their operation to clean up Karachi during the last year, but admittedly, life seems safer. Undoubtedly, we the citizens of Karachi are thankful to the Rangers for bringing about some peace. It would be easy for me to say this sitting in my home, but speaking to the blue collar workers who reside in Karachi’s more volatile areas, the transformation seems to have been genuine.

A cleaning lady who hails from Korangi said to me,

“Bhai (brother), I live in a bad area. It was difficult to live there without people taking money from us in the name of a certain group. It was also not unusual to see the same people walking about at night heavily armed. But since the Rangers’ operations started we have started to see more calmness. It is far from perfect, but it is significantly better.”

Of course, before we gloat about MQM’s lack of street strength, regardless of how we feel about the party, let’s keep in mind that they were created out of necessity, and were a symptom of Pakistan’s discrimination towards people from Karachi. Even now, when I speak to former MQM voters who are highly educated and boast impressive careers in the private sector, they tell me of a time when the people of Karachi faced incredible bias.

I have heard first-hand accounts from senior Karachiites who were appallingly denied their rights in terms of education, work, and other basic civil freedoms.

Yes, there was a gaping wound in Pakistan and MQM functioned as the bandage. If the bandage has become dirty, then the blame not only lies with the bandage, but the source of the wound as well.