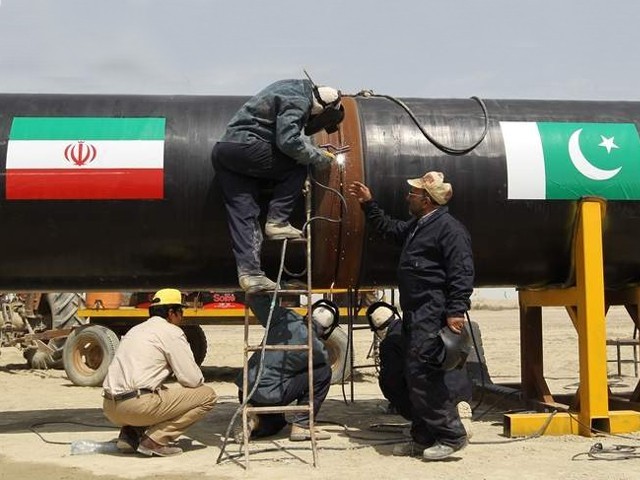 Iranian labourers work on a section of a pipeline - adorned with Iranian (L) and Pakistan (R) flags PHOTO: AFP

It doesn’t take a genius to understand that trading blocks and economic alliances rather than geo-political rivalries and deadlocks are the key ingredients of success in the modern-day world. Gone are the days when building military might and muscle would enhance the prestige of nations or make them stand head and shoulders above the rest. The evolution of European Economic Community (EEC) into a prosperous European Union (EU) and the transformation of South East Asian economies into a formidable Asian Tigers unit only go to show that economics trump over politics.

Without digressing much, Pakistan’s recent offer to Iran to join the China-Pakistan Economic Corridor (CPEC) is nothing but a heartening development. By heartening one is not implying anything persuasively or melodramatically emotional but a realistically prudent measure that essentially, if it comes to fruition with Iran deciding to join the organisation/corridor, would help overcome a few hurdles along with opening up opportunities for the teeming regional millions.

So what’s in it for Pakistan?

What will the possible inclusion of Iran in the CPEC framework mean to Islamabad’s economic and strategic interests? Pakistan needs friends. Having refused military assistance to the Arabs this past spring, it is unceremoniously exiting the good books of its ‘brethren’. It became obvious that the Arabs had unfriended Pakistan when the UAE foreign minister criticised Islamabad for staying out of the conflict – a statement that kicked up a massive social media storm, and secondly when the Arabs hit back by signing a $75 billion ‘infrastructure’ deal with India – a deal that many believe could have gone Pakistan’s way had its leadership decided to fight the Houthis.

Moving on, Iran’s inclusion in CPEC will help Pakistan in a number of ways. One, Iran’s re-entry into the active international fold after the recent lifting of sanctions bodes well for Islamabad. For Iran, there’s no looking back. Trade and economic representatives from all over the world are scrambling to Tehran to woo Iran to do business with them. Analysts are predicting a turnaround of fortunes for the Iranians as well as transformation of the oil market mechanistic dynamics.

For Pakistan, Iran’s resurgence is nothing but good news, especially as far as the long forgotten Iran-Pakistan pipeline project is concerned. There is now a reason to believe that some progress will be made in the changed set of circumstances.

Moreover, this could be the moment of truth that Pakistan can possibly utilise to alleviate Iran’s age-old grievance of fanning sectarian strife and Sunni extremism in the Iranian areas that border Balochistan. Iranians are tough cookies when it comes to diplomacy and negotiation. The world witnessed the astuteness with which Foreign Minister Javad Zarif was able to talk it out with the Western powers and navigate a nuclear deal that pretty much gave the Iranians the much needed breathing space that they’d been looking for for decades. By aligning itself effectively with Iran, the benefits that Iran will end up deriving on account of the absence of sanctions can be passed on to Pakistan.

Additionally, the fact that Pakistan has been under the influence of deadly Wahhabism for eons now, those shackles may possibly be loosened if not completely broken now. Iranians are, by outlook, a much moderate genre of people compared to the Arabs. One can hope that the Ayatollahs take a chill pill and let Iranians be themselves, the way they were in the Shah’s time, liberal and unfettered by religious extremism. That moderation can certainly have a trickledown effect on those Pakistanis who have adopted radical views of faith.

Although the Chinese have been leery of a nuclear deal with Tehran, Beijing now seems enthusiastic in letting Iran get on with the proceedings in the post-sanctions world. There are plenty of infrastructure related opportunities that Iran offers and with Tehran now keen on mobilising its people and businesses across borders, the Chinese will be equally anxious to grasp whatever comes their way.

Iran and China are both wary of the ISIS and the Wahhabi menace. Their interests truly converge by virtue of each having to deal with extreme Islam in one way or the other.

Many have argued that the Indians wouldn’t necessary like the idea of Iran joining CPEC – a perception that doesn’t hold water. To my mind, India has completely flown out of the mind-set whereby it would have serious jealously issues with Pakistan. Whereas it is absolutely understandable that it is difficult for Pakistanis to realise that India is in a different league now, one that is characterised by success in economic terms instead of parochial geo-political concerns.

India has its bases well-covered. It’s on the right side of most, if not all, major international players and has made its mark as an important world economic power. It is on account of its goodwill that UAE had no hesitation inviting Prime Minister Narendra Modi to ink the historic bilateral agreement and effectively ditch Pakistan in favour of India.

Gone are the days of hobnobbing and tinkering. It’s all about numbers now. India is more concerned about feeding the mouths of millions of hungry souls out on the streets and slums of its mega cities that need basic necessities of life. The emphasis now is on surpassing China and other emerging powers in the sphere of economic development – a progressive pattern of thinking which is right in line with the changing times that we find ourselves in.

The UAE-India agreement language was interesting. It seemed someone constructed, the agreement with Pakistan’s terrorism issue in mind. There was a constant mention of coordinating ‘efforts to counter radicalisation and misuse of religion by groups and countries for inciting hatred, perpetrating and justifying terrorism or pursuing political aims’. To me, at least, this was nothing less than an ‘ouch’ moment. I thought this could have been worded differently to make the language sound less pinching for Pakistanis. Rubbing salt on one’s wounds is all I could think of.

I’m writing this piece on the day when we in America are remembering those who lost their lives on the fateful morning of September 11, 2001. The day brings back sombre memories and reminds us that aggression never pays and while Pakistan is trapped in its insecurities vis-à-vis geographical integrity and religious beliefs, for someone as gullible as me, the CPEC offer to Iran is a great development. It could become a historical turning point, provided Pakistanis and Iranians stay focused and work on human priorities, build infrastructures, and learn from China’s global success.

Having said that, let’s not celebrate too prematurely. The journey is painstakingly long. While the first step is the hardest, patience, perseverance and persuasiveness will be the critical factors in turning a well-intentioned strategic move into a super-duper success story.