Dear Malala Yousafzai, your Nobel Prize is not your ticket to Stanford 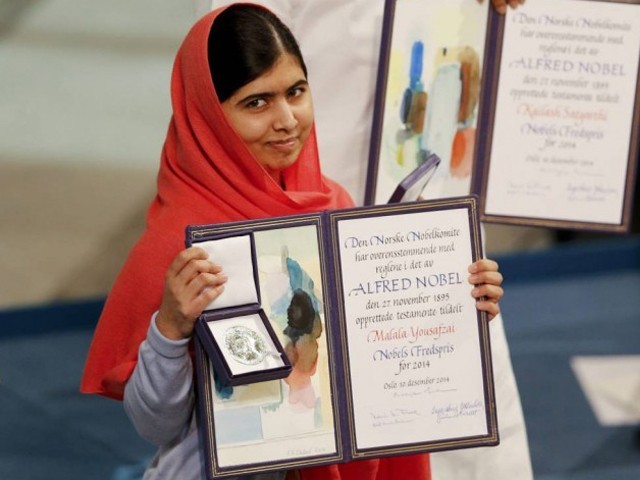 Malala Yousafzai accepted the award during the ceremony in Oslo. PHOTO: REUTERS

It is time for Malala Yousafzai to start considering colleges for the next phase of her education. However, here the queen of education seems to have run into a little snag.

Though she has her eyes set on Stanford University in California among other institutions, Stanford has demanded that she demonstrate herself to be academically adept as per US standards for college admission.

Not quite interested in her stature as the youngest Nobel Laureate, the university, which ranks number third in the world, has demanded Scholastic Aptitude Test (SAT) scores from Malala.

SAT is a specialised test of academic skills in the areas of reading, writing, and math required for applying to admission to US colleges. SAT does not ‘pass’ or ‘fail’ a person but judges aptitude. The maximum score one can get is a 2400.

In the US, SAT is a huge deal for a high school student who is aspiring to get into a prestigious university like Berkeley, Stanford or Yale etc. It isn’t easy to get even a 2000 score on a SAT test. Even apart from the SAT test, the stakes are really high for anyone aiming for Stanford. The SAT test can be taken anytime during the sophomore, junior or senior high school years and the score is counted along with overall academic performance to make admission to a good university possible.

This year alone, 42,167 people applied for admission to Stanford University out of which only 2,138 actually succeeded in getting admission. Considering this, if there are questions raised as to why Malala should be granted a waiver on her SATs, it is no surprise.

Jeffrey Goldberg of The Atlantic tweeted,

Stanford is apparently demanding that Malala Yousafzai take the SATs before applying, because what's a Nobel Peace Prize, anyway?

"sure, she is the global face of the female education movement and stood up to the taliban by herself, but how's her reading comprehension?"

There are arguments that Malala has done really well on her SAT equivalent testing in the UK and that those grades should suffice for admission eligibility. But then, if she has really done so well on her UK SAT equivalents, then she shouldn’t have trouble acing the US SAT either.

On a personal note, all students who are aspiring to enter a really sought after college must be academically assessed on an equal footing, Nobel Prize or no Nobel Prize.

Also, making sure she enters a university like Stanford on the basis of merit rather than ‘unusual circumstances’ will cement her respect in the eyes of her peers and will garner more respect for her in the long run than she would be able to muster otherwise.

After all, if she is the global symbol of women’s education and a resonating voice for girl’s education, she has to hold that flag up high.