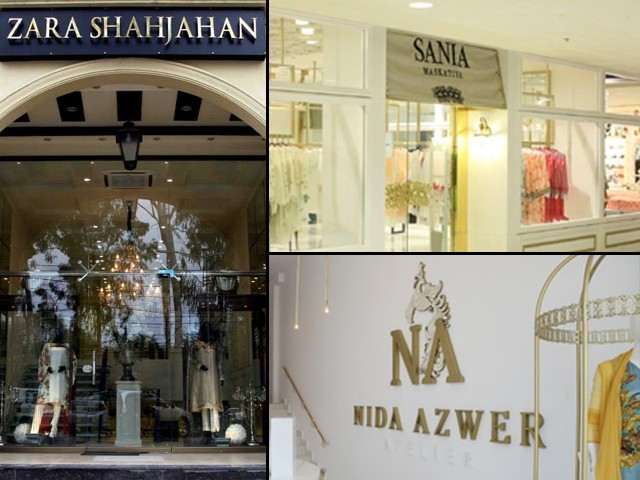 Sure, they’re not designing for any company, but their own names serve as brands to consumers.

There is palpable tension in the fashion industry as the Punjab Revenue Authority (PRA) turns to its latest target. Around 13 fashion outlets were sealed by PRA officials last week for non-payment of taxes.

According to some of the designers, PRA is responsible for ‘collecting sales tax on revenue from selling services’ and since they are designing products for themselves and their own companies and not for any other company, the service tax doesn’t apply to them. This is a classic example of tax avoidance. Sure, they’re not designing for any company, but their own names serve as brands to consumers. Technically, they do render a service to their exclusive clientele.

Another designer felt it was unjust to specifically target the fashion industry and not the other service providers, such as teachers and doctors. So far as baseless arguments go, this one tops the list. The comparison was completely unreasonable. Teachers’ work load is tremendous. They spend hours handling rowdy children, and their weekends pass in a blur of checking exams and making homework sheets, all for a paltry sum of Rs20,000 – the average salary of schoolteachers in Pakistan. Doctors spend years studying and their consultation fee varies with their experience and specialisation.

Our designers – many of whom hold no qualifications in designing and a few even accused of stealing designs of international designers – earn hefty amounts of profit. Most of the accused designers charge an average of two lakhs per outfit. On top of that, some even fail to deal with their customers courteously, as the recent Tabassum Mughal case demonstrated all too well.

Yet another designer complained that this tax was ‘new’. New or old, the elected state decides which taxes to levy on businesses. There was a similar hue and cry raised by the fertiliser and other sectors of the industry upon the introduction of Gas Infrastructure Development Cess Act earlier in 2015. But guess what, they didn’t have much choice either.

The government also introduced a bill recently, where if a student’s total annual university fee amount is greater than Rs200,000, the fee will be subjected to a five per cent withholding tax. If education fee of unemployed students is being taxed now, then why should these fashionistas be allowed off the hook?

Save for a few exceptional years, Pakistan’s fiscal deficit has mostly remained high. And there is little wonder why. Tax is a primary source of revenue generation. The tax base is already constricted in Pakistan. But this problem has intensified further since tax evasion has become a norm for businesses and powerful citizens alike.

Many businesses prefer to remain undocumented to escape taxes. The system of direct taxation – in the form of corporation tax, wealth tax, land revenue, agriculture income tax, property tax, etc. – is hopelessly undeveloped. Perhaps direct taxes essentially impact the rich of the society rather than the average professional middle-class citizens, who don’t own much property or businesses to begin with.

The political influence inevitably seeps in, because authority rests in the hands of industrialists and feudal landlords. The bourgeoisie is the policy-maker. It explains why the agricultural sector remains largely untaxed to date.

Eventually, the deficiency is fulfilled through indirect taxes. Hence, the system is structured in a way that it compels all social classes to pay indirect taxes, but lets the rich evade direct taxes on their assets and income.

It is reassuring to see that the PRA is attempting to change this situation. The previously-dormant institutions are now stirring to life, and it is heartening to witness the transition. So I applaud PRA as it is off to a good start.

However, the government should not only concern itself with small service brands, rather the Federal Board of Revenue should take this a step further by ensuring that large family-owned holdings and mills (particularly textile and sugar) are equally accountable. Factory owners with political affiliations are frequently accused of compromising the law by hiding money in offshore accounts, and thorough investigations should be carried out to see if these allegations are true.

Having said that, the government should proceed carefully; if private investors’ confidence is lost once, then it will be difficult to regain their trust. Pakistan fails to attract private investment due to their inconsistent policies. Long-term strategic planning becomes difficult when the external environment is so volatile.

Now, if only the Pakistan Environmental Protection Agency (Pak-EPA) would do something about industrial waste disposal, that would be great too. Here’s to unwavering hope.