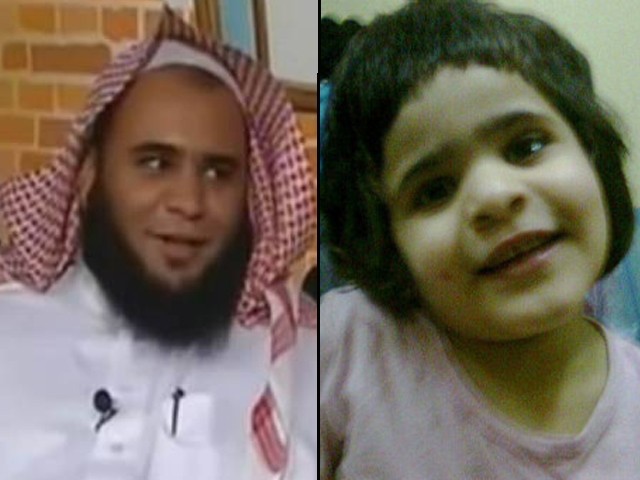 Ghamdi wasn’t happy with his daughter, Lama. He found her innocent smile as well as her other mannerisms to be flirtatious.

If you’ve ever wondered what the face of barbarism looks like, then look no further than this man.

His name is Fayhan al-Ghamdi, and according to reliable sources such as Gulf News and The Independent, he is a famous preacher in the Kingdom of Saudi Arabia, who regularly appears on local television.

To say the least, Ghamdi wasn’t happy with his daughter, Lama. He found her innocent smile as well as her other mannerisms to be flirtatious, and soon began to suspect that she wasn’t a virgin.

The only problem with this, of course, was that Lama was only five-years-old. She was, as you can see, just an innocent baby.

Of course, this psychopath didn’t understand his own child, whom he had with his first wife, an Egyptian national. Initially believing him to be a gentle man, Lama’s mother eventually divorced Ghamdi after noticing the violent streak in her husband.

Like any child, Lama loved her father, and wanted to continue seeing him, even after her parents had divorced.

MSN.com reports on the circumstances which lead to Lama’s death as told by her mother,

“The last visit was when I took her to see him in Riyadh where he had moved after he lapsed into a long silence even though Lama was keen on seeing him. The agreement was that she spends only two weeks with him, but after 14 days, he refused to let her come back home to me. The last words I heard from her were ‘I love you, mum and I always pray for you’.”

In late 2011, Lama’s mother was stunned to learn that her daughter had been admitted to the hospital, burned, bruised and in critical condition, with signs of torture,

“It was such a terrible shock to see her frail body in this tragic state. She remained paralysed for several months before she passed away.”

Gulf News states that Ghamdi along with his new wife beat his five-year-old daughter with an iron rod and wires. Other reports suggest that Lama was brutally sexually assaulted, raped, and beaten with a cane.

Paralysed, this poor child went into a coma for eight months before finally passing away.

The Saudi media, which had always been kept on a tight leash by the government during my 18 years in Saudi Arabia, took up Lama’s cause. Later, they were threatened by the wealthy preacher’s lawyer,

“The lawyer warned he would take action against all the media that had tarnished the reputation of his client and the status of the judicial system in Saudi Arabia by misreporting the facts about the case.”

Ghamdi’s conviction was a rare occurrence in a country, where most who earn a taste of local justice are blue collar expatriates.

In late August, charges against Ghamdi were dropped by a Saudi court. Although the medical examination suggested Lama was sexually assaulted, the investigators couldn’t find traces of semen (probably because the metal rod was used to assault the girl).

Let’s let that sink in. In the eyes of the Saudi court, Ghamdi was only guilty of being too harsh in disciplining his daughter, who was beaten and sexually assaulted into a coma.

Meanwhile, Saudi blogger Raef Badawi rots in a prison, condemned for 10 years and 1,000 lashes, only because he criticised his draconian government.

As someone who grew up in Saudi Arabia, I am not surprised by this case. During my time there, the local media wasn’t free to report as they pleased, but first hand rumours of Saudi cruelty were whispered quietly in social gatherings.

Aside from numerous cases of child molestation –  which you can read about in my blog here –this misogynistic society where women aren’t allowed to drive, and must dress like a ninja on constant patrol, was already known for its frightening treatment of women.

Cautionary tales of women being raped, gang-raped, or worse, were often exchanged over tea, and expatriate women especially were advised to travel only in groups.

Two incidents from my childhood come to mind. One, where my mother clad in an abaya was targeted while waiting outside with me until my father came to our rescue; another, where my mother and my uncle’s wife were harassed by a group of men in a scary incident.

This is not to paint all Saudis with the same brush. Many I met were decent people. And while Saudis generally receive women and expatriates with disdain, I know of numerous expatriates who were treated remarkably fairly during court cases against Saudis. In general, the Saudi police are effective at keeping petty crimes at bay.

Unfortunately, it is very rare for women to earn justice for crimes committed by Saudi men. Foreign maids, especially, are targeted regularly by their employers, though it isn’t a picnic for Saudi women either.

The most shocking is the case of a 19-year-old Saudi woman who was gang-raped by seven Saudi men, and was sentenced to six months in prison as well as 200 lashes.

Her lawyer’s license was also seized so he would be unable to defend her further, while the lady herself was punished for travelling outside her home without a male guardian.

According to the World Economic Forum’s Global Gender Gap report from 2013, Saudi Arabia ranks at 127 out of 136 countries for gender parity. Meanwhile, the Saudi Gazette claims only 13 per cent of Saudi Arabia’s workforce are women, even though they constitute over 50 per cent of Saudi graduates, which happens to be a startling disparity.

Saudi women by law are unable to take decisions such as marriage, divorce, elective surgery, travel, and the like without permission from their guardians. This law is often abused when fathers marry off their prepubescent daughters to old and lecherous wealthy Saudi men for financial gains.

What’s worse is Saudi women are still not allowed to drive. A Saudi historian reasons that if women could drive, they would get raped if their cars broke down. He also says that American women don’t care if they are raped by the roadside, which is ridiculous.

Well, instead of taking away the freedom of Saudi women, perhaps you should teach your sons to respect them. Perhaps if you publicly castrated the next man to rape a woman with rusty garden scissors, instead of publicly flogging a woman who happens to be a rape survivor, a hundred men would think twice before thinking of committing the heinous crime.

These absurd laws are on paper, designed to protect women, but in reality they serve to shackle them. A shackled woman, much like a slave, is easier to control. She is easier to rape, and easier to sell to another man by her guardian under the guise of a marriage. Sometimes, very sadly, she is not even a woman, nor is she a teenager. She is a five-year-old girl, whose only fault was that she loved her father.