1965: You didn’t win the war India, but neither did we, Pakistan 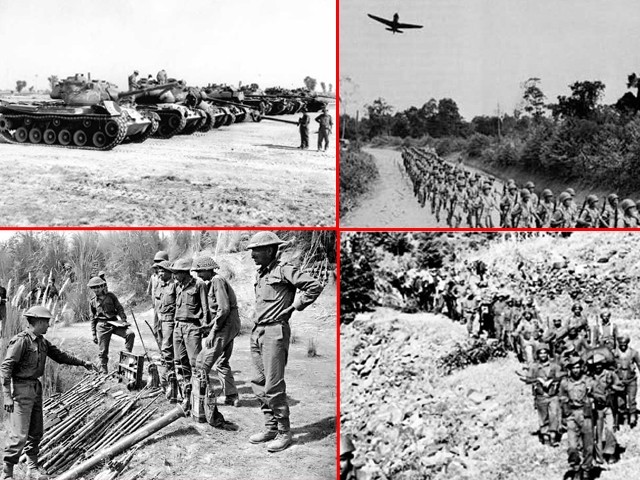 In the last 50 years, both India and Pakistan have claimed their respective victories on the basis of their own proclamations.

There is no doubt that the 1965 Indo-Pak war over the status of Jammu and Kashmir ended in a United Nations (UN) mandated truce that compelled India to accept the ceasefire on September 21, 1965 while Pakistan agreed to it on September 22, 1965.

The Tashkent peace agreement constrained Indian Prime Minister Lal Bahadur Shastri and Pakistani President Ayub Khan to quit all territorial claims and pull back their armies from the disputed terrain to pre-conflict positions by February 25, 1966.

Although it is also evident that the conflict was halted with a truce due to the policies of the US and the Soviet Union – who were engaged in the Cold War at the time – both rival neighbours, Pakistan and India, still claim victory against each other.

In the last 50 years, both India and Pakistan have claimed their respective victories on the basis of their own proclamations. Neither of the sides is ready to admit each other’s assertion, which is mostly based on home-grown broadcasting. Local newspapers of both countries are not a genuine source for any authentication as media outlets were highly influenced by official policies of the time, particularly about war coverage. Hence, it is really difficult to find precise and genuine facts and figures about the real nature of the 1965 war due to the limited media coverage of the war in South Asia. However, international media’s reporting and independent journalists’ commentary is a great source to understand the must-know details of the battle.

The Indo-Pak war of 1965 witnessed extensive aerial combat with defensive and offensive operations. Operation Dwarka, a noteworthy naval attack by Pakistan Navy and the battle of Chawinda in Sialkot sector, the largest tank battle after World War II, were the highlights of the battle.

In wake of these events, India and Pakistan formulated generally conflicting explanations and testimonies about the destruction they perpetrated as well as the losses they suffered during the confrontation.

I do not want to delve into the details of each and every operation that was conducted during the war. Instead, for neutral assessments, I would like to mention some of the excerpts from the foreign media’s war-reporting of the 1965 war. Some of these have been documented in great detail.

An American weekly Newsweek magazine applauded the tactics of Pakistan’s armed forces who repulsed the attack by large Indian army and defended its territory.

“By just the end of the week, in fact, it was clear that the Pakistanis were more than holding their own.”

A very interesting opinion was written by Donald Seaman for Daily Express (London) on September 24, 1965:

“Outnumbered three-to-one, they beat the Indians to a standstill, and were about to mount a counter attack in the last six hours before the ceasefire when they were stopped on political grounds.”

“Again India appeared, logistically at least, to be in a superior position but neither side was able to mobilise enough strength to gain a decisive victory.”

In the chapter ‘Of Cowardice and Panic’ of his book ‘1965 War, the Inside Story: Defence Minister YB Chavan’s Diary of India-Pakistan War’, RD Pradhan openly wrote the account of Indian Defence Minister from his day-to-day diary:

Rob Johnson in his book ‘A region in turmoil: South Asian conflicts since 1947’ stated,

The Time Magazine’s correspondent Louis Karrar wrote in a war dispatch on September 22, 1965,

“Who can defeat a nation which knows to play hide and seek with death? Playing with fire to these men – from the Jawan to the General Officer Commanding – was like children playing with marbles in the streets. I asked the GOC, how is it that despite small number you are overpowering the Indians? He looked at me, smiled and said: If courage, bravery and patriotism was purchasable commodities, then India could have got them along with foreign aid.”

Roy Meloni, a journalist of American Broadcasting Corporation summed up the events of the war on September 15, 1965 as follows,

“I have been journalist now for 20 years and want to go on record that I have never seen a more confident and victorious group of soldiers than those fighting for Pakistan, right now.”

Patrick Seale, a Belfast-born British journalist and author for The Observer, wrote about the air combat between India and Pakistan (September 12, 1965),

“Pakistan’s success in the air means that she has been able to redeploy her relatively small army – professionally among the best in Asia – with impurity, plugging gaps in the long front in the face of each Indian thrust.”

According to a Daily Mirror correspondent (September 15, 1965),

“And there is the smell of death in the burning Pakistan sun. For it was here that India’s attacking forces came to a dead stop. Screaming Pakistani troops bet off the attacking Indian forces again and again.”

Guardian’s journalist, Peter Preston, wrote on September 24, 1965 about the air strikes of Pakistan Air Force during the 1965 war,

“One thing I am convinced of is that Pakistan morally and even physically won the air battle against immense odds.”

The Time Weekly published the following assertion on September 17, 1965 about the aerial warfare of Pakistan Air Force,

“In the air, it was much the same story – Indian quantity and Pakistan quality. In the short run, Pakistan’s small, highly trained army is more than a match for the Indians.”

At the end of the 17-day war, huge personnel, economic losses and strategic blunders by both India and Pakistan confirmed that the Indo-Pak war of 1965 ended in a stalemate and none of the rivals were eventually declared as victors of the combat zone. The Tashkent Declaration wounded up the affairs of all the armed consequences of the 1965 war.

From the aforementioned excerpts, it is evident that despite what is said nowadays, the Pakistani Army has given its nation and the people enough to write home about.