Why do Muslims play victims of free-speech but make excuses for apostasy and blasphemy? 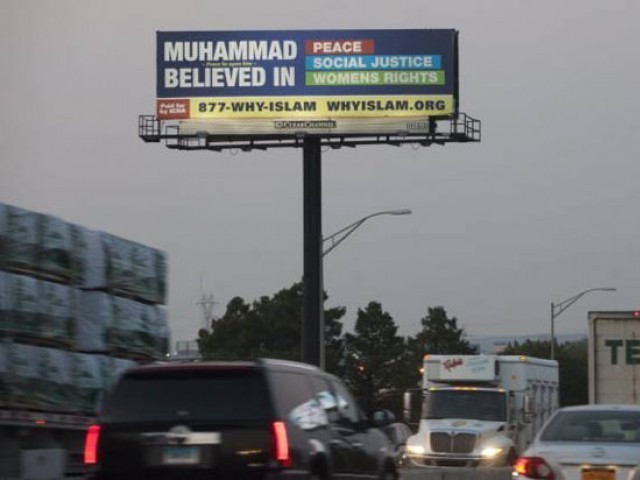 The Islamic Circle of North America (ICNA), as reported by The Express Tribune on September 1, 2015, initiated a nationwide campaign to ‘create awareness about the religion (Islam)’ by displaying billboards that, as ICNA spokesman Nadeem Baig stated, hopes to,“raise awareness about the faith and to dispel myths about the Muslim Americans”.

Yahoo News also covered ICNA’s crusade and the comments section got flooded by anti-Muslim vitriol. Such comments demonstrate that Islam has a poor image in America, thanks to the Taliban, Boko Haram, al Shabab, Daesh and Saudi Arabia. The ‘lone wolf’ attacks on the army recruiting centre in Tennessee further add fuel to the fire. And ICNA wishes to counter just that.

So how effective are their billboards? Will they foster greater understanding of Islam? Or will they be seen as propaganda?

Americans, like most people, dislike proselytising. Unfortunately, despite good intent, ICNA misfired. Platitudes from Muslims are not what the Americans desire. Americans want assurance concerning free speech and tolerance towards not just the ‘people of the Book’ (Christians and Jews), but also homosexuals, atheists, apostates, Buddhists, Hindus, etcetera.

“Congress shall make no law respecting an establishment of religion, or prohibiting the free exercise thereof; or abridging the freedom of speech, or of the press.”

Non-Muslims in America want Muslims to respect values that neither favour nor prohibit the exercise of religion. Too often instead, they see acts of religious chauvinism that create a negative impression. For example, the Council of Islamic American Relations (CAIR) recently filed a discrimination lawsuit, as reported this September by CBS News, against an airline when a Muslim woman did not receive special accommodation.

“None of us believes in an untrammelled right to free speech.”

Yes ISIS is brutal, but US is more so, 1.3 million killed in Iraq, Afghanistan and Pakistan #NoToWar @democracynow http://t.co/fjaszeKTYD

When such statements are passed, Americans justifiably wonder why mainstream Muslims harbour such bigotry and claim victimhood, while they make excuses for extreme views such as apostasy, blasphemy laws and a culture responsible for the attack on Charlie Hebdo.

Moreover, Americans see what happens to Muslims or former Muslims who critique, such as the bloggers in Bangladesh who are being murdered or the sadistic treatment of Raif Badawi in Saudi Arabia. These reformers risk their lives or are singled out (by Deepa Kumar and her ilk) as ‘house Muslims’ and ‘native informants’.

Christianity espouses this philosophy of ‘turn the other cheek.’ Buddhism as well,

“If others speak in dispraise of me, you should not give way to resentment, displeasure, or animosity against them in your heart.”

When groups such as ICNA and CAIR have made such statements, without any ‘buts’, the perception of Muslims will ameliorate. As is, ICNA’s abstract terms of ‘peace’ may be a start, but without a clear message, their billboards come off as advertisements.