PCB should ban Amir, Asif and Salman Butt for life 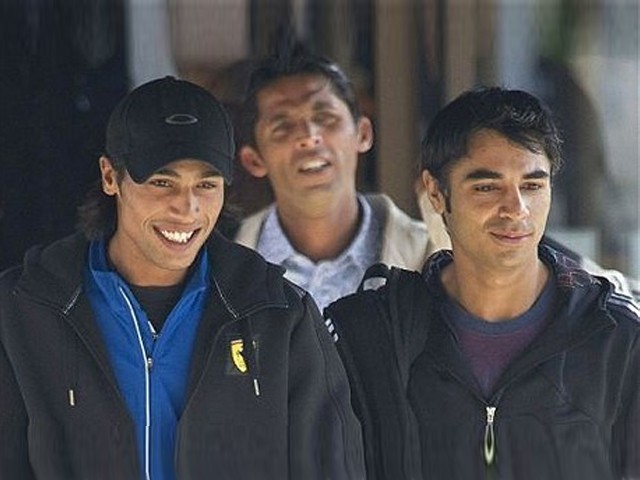 In the dock: Mohammad Amir, Mohammad Asif and Salman Butt are set to be charged under a 104-year-old corruption law by Scotland Yard PHOTO: AFP

The ban imposed by the International Cricket Council (ICC) on the ‘tainted trio’ of Mohammad Amir, Mohammad Asif and Salman Butt, for their involvement in spot fixing was officially lifted on September 2, 2015. Although the ban on the players is lifted, I vehemently oppose the selection of these cricketers for the Pakistani team ever again.

Pakistan Cricket Board (PCB) should do what is right and impose a life ban on these players.

When a company decides to hire an employee, it performs background checks to avoid hiring a person with a criminal record. It does not want its image to be tainted or be put at risk internally or externally.

The case of Amir, Butt and Asif is also similar to the abovementioned scenario. Re-selecting even one of these players will set a weak precedent for future players; one that says, so what if you committed a heinous crime like gambling or spot fixing, you were young and impressionable, so we forgive you.

But is that the kind of precedent we are ready to set and commit to?

If compared to a cricketing nation like the West Indies, where talent is drying up and they have no option but to reinstate Marlon Samuels, despite him having served a two-year ban due to betting, ours is a very different case; Pakistan has absolutely no dearth of cricketing talent.

Although some players and critics want to give this tainted trio a second chance, I am steadfast in my belief that these players are compulsive criminals. If they are given a chance to represent Pakistan again, God forbid, they will once again indulge in criminal activities and tarnish the image of Pakistan.

Starting with Asif; in 2006, he was slapped with a one-year ban by the PCB for failing a dope test. Asif appealed to the PCB and unfortunately, the organisation lifted the ban, based on the assumption that Asif would not repeat the act again.

Asif committed a second criminal offence in 2008, when he was caught with drugs at the Dubai airport on his way back from India, after playing in the first edition of the Indian Premier League (IPL). After the Dubai airport incident, Asif put forward his innocence by claiming that he is unaware of how the contraband made its way into his wallet. The Pakistani embassy and the PCB offered Asif their full support and prevented him from a long detention.

How did Asif repay the benevolence of the PCB and this country?

By indulging in spot fixing in England, in 2010.

After reviewing Asif’s unscrupulous past, I ask you, do you think this man can be trusted to play on our team again?

While you ponder over that, let me now move on to Salman Butt. In 2010, Butt was given the opportunity to perform as captain of the Pakistani cricket team during the England tour. He made history when he led our team to a Test match victory over Australia, at Headingly, after a dry spell of 15 years. While praise was showered on him from all quarters, his over-confidence, and perhaps the weight of expectation from fans, was too much to bear, leading him to what we believe to be the biggest spot-fixing scandal in the history of this country.

Although marked currency notes were recovered from Butt’s room, he continues to blatantly deny his involvement in the crime. Butt pleaded his case in front of his family with so much conviction that they were sure he was innocent. So much so, that his sisters were trying to convince pedestrians on the streets of Lahore to accept their brother’s innocence. His father vowed to unveil the actual hidden facts behind the spot fixing allegations, but soon enough, all he could do was accept the crime committed by his son.

Butt continued this façade of innocence for nearly five years. He finally succumbed to confessing, a few months ago, after realising that his admission would be more favourable than a lie. In light of his confession, would you be comfortable with him representing our team again? Is he the role-model our future players should aspire to?

Amir, on the other hand, has been given an unfair advantage because of his ‘tender age’ at the time the crime was committed. Admittedly, he was just 18-years-old when he gave into the crime of spot fixing, but last I remember, an 18-year-old was considered a legal adult in most countries including Pakistan. Would an adult not be able to distinguish between right and wrong?

Amir claims he was under duress from Butt and Asif and barely had a choice in the matter. According to Amir, when Butt said,

“I said, Bro, I’m scared I can’t do it. I was churning inside, thinking about it. I cursed myself. I knew I was cheating cricket…Then I did it.”

Phone records show that Ali tried to call Amir 40 times during the build-up to the Oval Test as the spot-fixing plot was being hatched: Amir returned the calls twice. However, he did give him his bank details, recorded David Hopps of ESPN cricinfo.

He must have been under immense duress when he read out his bank details and counted the cash afterwards.

Even though Amir is considered to be extremely talented, his records speak otherwise.

So far his Test match record is below average. He has played 14 Tests out of which 11 have been played in the favourable conditions of Australia, New Zealand, and England. Even after playing most of the Test matches in bowler friendly conditions, he managed to bag only 51 wickets.

This record negates the fact that he is an extraordinary bowler. If we compare Amir to Junaid Khan, who is a hardworking and honest player, Junaid has played a majority of his Test matches in Asia. His records state that he has played 22 Test matches out of which 18 have been played in Asia, and although he’s mostly played in unfavourable conditions, he is not far behind Amir in terms of strike rates. Moreover, his economy rate is definitely better than Amir’s. I have stated the example of Junaid because I would hate to see a player like him being dropped in favour of Amir.

In an interview with The Guardian, the current PCB chairman Shahryar Khan said,

“It was a very lenient sentence, but it does send a message to other players that they cannot err. We’ve been too complacent in the past. This shows that we need to clean out our stables – and we need to do it very quickly.”

How long are we going to let them get away with just a slap on the wrist?

This is Mr Shahryar Khan’s opportunity to bring about actual change to our cricketing sphere. To me, there is no reason why these three men should be reinstated in the Pakistan cricket team. An example needs to be set, and now is the time to do it. Impose the life-ban.