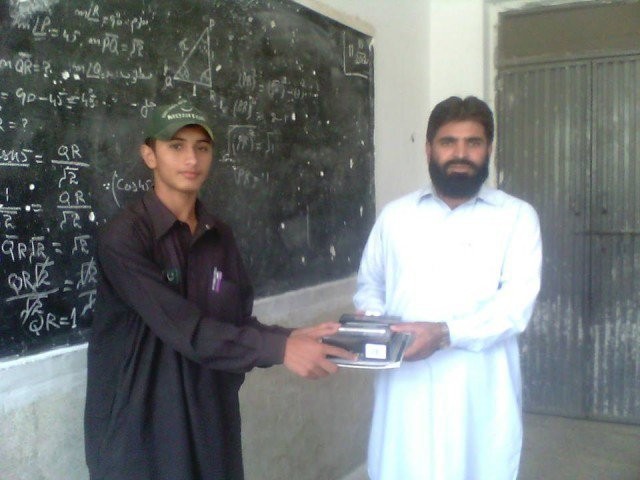 “But man is not made for defeat. A man can be destroyed but not defeated.”

Ernest Hemingway’s words echoed in my mind, while I read about Shah Faisal, son of a samosa vendor from Malakand, who bagged the top spot in the Board of Intermediate and Secondary Education (BISE) examination in FSc computer science. He stood tall and defiant, and refused to give up on his ambition, regardless of his financial shortcomings.

Individuals with unwavering courage like Faisal are an embodiment of our belief in the human dignity. Faisal, as it happens, is not a rich prince or the son of a politician, with top schools running after him to have him enrolled, expecting generous donations. He is, instead, a samosa vendor’s son with a set of real and hard-core problems, which he has to deal with every moment of every day. He struggles to strike a balance between his education and his family responsibilities, which he so courageously shares with his father.

This is where the majority would give up and be consumed by their circumstances, but a few would stand up defying their conditions and change the course of history. And Faisal has done precisely that. He has carved a path for himself and his family, with his unflinching determination and incessant struggle on every step.

It’s only natural if one looks for the hidden secret, the unfailing strength, the unfair advantage which helped Faisal achieve what others, financially far better placed, could not. But I am sure one doesn’t have to look beyond Faisal’s financial shortcomings and his companion, his father, to recognise his interior motive.

Researchers reveal that economically disadvantaged children are more likely to work harder and take their education more seriously. Moreover, what’s equally encouraging is the involvement of their parents, who are relatively more concerned about their children’s future. The findings of a study called ‘Must Try Harder’ advocates that children’s educational achievements could be effectively enhanced by improving their parental involvement.

Faisal has seen his father work hard day and night to provide for his household of eight members, hence he also stands side by side his father for this very purpose. They say strong characters are not formed in front of TV screens or video games, rather formed out in the field, sweating, struggling, falling, learning, and rising up again.

While Faisal’s father ensured that he attended school, Faisal, in turn, made sure that his father does not struggle alone. Together, with the help of Faisal’s teachers, they have been able to succeed. Unfortunately, many Faisals of our society are working harder to make the best out of their dishearteningly scarce resources.

Furthermore, another study suggests that the children who have it all – in terms of better access to schooling, substantial financial backing and outreach to top institutions – are losing value for education. Therefore, children belonging to affluent families exhibit frighteningly high rates of substance abuse, cheating, bunking classes, carrying weapons in schools and outside, and indulging in activities that not only lead to a princely wastage of resources but is also manifesting the diminishing value of education for them.

Interestingly, the major reason for rich children’s indulgence in such condescending activities is quoted to be a lack of parents’ involvement in their children’s day to day affairs. It’s been stated that the majority of affluent parents, ridden with their businesses and social activities, find little time to engage with their children. Therefore, they make alternative arrangements, such as hiring home tutors or sending them to private tuition centres, besides sending children to top schools.

In the longer run, this not only creates a feeling of estrangement between them, but also leaves children at the mercy of strangers. The high rate of maladjustment among wealthy youngsters is glaringly counter intuitive. The findings suggest that the privileged adolescents are much more vulnerable today than the children from poorer backgrounds.

It may be thought-provoking to note that the source of motivation for children from affluent backgrounds versus children from poorer backgrounds in terms of valuing education stems from completely different sources. Where a rich kid may be motivated to do well in school by the ambition to get into a prestigious school, or ultimately maintain their standard of living. However, the motivation of a child like Faisal is not only to do well for himself but for their families as well. He fights a constant emotional, psychological, financial and existential battle, hence, he cannot afford to be irresponsible or give up. But not everyone succeeds. Many hardworking Faisals in our society are devoured by their circumstances, despite their remarkable productive contribution to society’s gains.

Therefore, it is embarrassing to reflect that we have done little to groom and safeguard these potential national assets, these shooting stars which sink into oblivion because we as a society have not been able to institutionalise support for them. We fail to assist them in finding their spark in the engulfing darkness of wastage of resources.

Every time a Faisal is able to defy his obstructing circumstances and shine bright at the national horizon, a politician or a rich man takes him under their patronage, just to create ripples with a prize of a few hundred thousands, and pledges for sponsoring his higher studies.

But what about those Faisals who cannot reach the top and were pulled down midway or those who drowned at shore due to certain circumstances, despite their incessant struggle against the odds?

Their actions are no less heroic than the ones who survive it all and become their flagstaff, a living memory of the remains of those who were consumed by their circumstances?

They say what we do in life echoes in eternity. While we might, someday, find ourselves immersed and drowned in the shame of an otherwise avoidable inaction. Faisal would always look at that greasy wrinkled old face of the samosa wala and smile with pride, the smile that would tell a story of undying love, dedication, and a never failing support for ages.