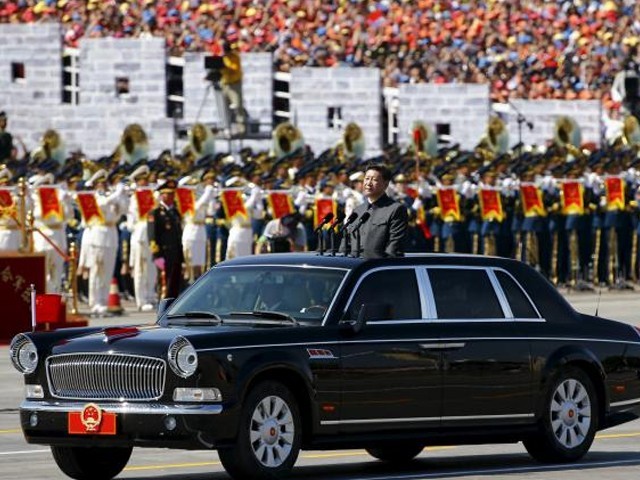 Chinese President Xi Jinping stands in a car on his way to review the army as military band members play next to him, at the beginning of the military parade marking the 70th anniversary of the end of World War Two, in Beijing, China, September 3, 2015. PHOTO:REUTERS

Wars may be designed to destroy nations; however, they play a critical role in building them as well. Is that what China has attempted to do today? China’s commemoration of the Second World War took place today in the city of Beijing. India too, is planning a festival to memorialise the 1965 war with Pakistan.

2015 seems to be the year we’re all celebrating war.

China put on a grand display of its military strength and laid bare its hegemonic ambitions in the Asian region. The Chinese administration has asserted that the intention of the parade is to remind the world of the sacrifices the Chinese people made as one of the allies in the Second World War.

At least thirty noteworthy world leaders attended the procession, including President Mamnoon Hussain, Russian President Vladimir Putin, President Park Geun-hye of South Korea and United Nations Secretary-General Ban Ki Moon. The parade had been organised to honour China’s victory over Japan. A Pakistani contingent comprising of 75 officers and soldiers formed a part of the 12,000 marching troops in the centre of Beijing.

Wars, although destructive in nature, possess the unique ability to rejuvenate and conciliate nations. The memory of war wipes away divisions within the collective that experienced it and leads to the creation of what Eric Hobsbawm refers to as “invented traditions”. Remembering war binds citizens together; mothers no matter which ethnic, religious or dissenting group they belong to mourn the loss of their sons in battle and fathers stand together as their chests swell with pride at the honour their sons brought to the country. Therefore, within a collective of different people, a shared cultural edifice is formed.

So, remembering war is good for the people of the country psychologically. The parade in China today, however, is marked in a very different hue. It was more boastful than mournful. It was a show of strength, not an opportunity to mourn. The world has been invited to watch as China flexes its militaristic muscle in a ring in which it is the only player.

China’s message is simple and clear: I am powerful. Look at my helicopters and missiles. Look at my allies marching with me. I am at the forefront in Asia. Look at everything I have. Japan, are you watching? America, can you see this? India, who’re you kidding…

Under the guise of inclusion, this is a clear affront to Japan; Prime Minister Shinzo Abe did not attend the spectacle. Not only did this make Japan uncomfortable, it was a difficult situation for the West as well because it felt that the parade was a self-serving political act.

Amidst the 200 fighter jets that overran the Beijing sky, 70,000 balloons and doves were released. Almost as if the balloons would be able to neutralise the severity of the display of military might. White doves don’t look pretty in military uniform, China. This show of good faith is so artificial; it feels like it has been taken from the pages of George Orwell’s 1984.

What is particularly peculiar is Pakistan’s enthusiasm in the whole thing. Although Pakistan has protested against India’s plans to organise a carnival in the name of the 1965 war, it underwent no hesitation in being part of China’s glorification ceremony.

Does no one remember how the Second World War ended? I’ll remind you. With Hiroshima and Nagasaki being bombed into oblivion. That episode is the only instance of nuclear weapons being used for warfare in history. Do we really need to parade around in tanks, fighter jets and missiles in remembrance of the lowest point in human history? Why did no one cry for humanity today in Beijing? Why did no one reflect on the miseries of war? Why were weapons worshipped like gods?

If India has been vigilant, it will realise that it does need to celebrate the 1965 war to bolster its national identity. In fact, Pakistan and India have a unique opportunity facing them. They can remember the war together. It is their shared memory and will allow them a chance to heal the rifts that have formed recently.

As for China’s WW2 parade… Well, it has found its way into history. More shame has attached itself onto humanity’s shoulders.

Today, if my fingers happen to come across some prayer beads, I will only have four syllables on my tongue.