Dear Zardari, you weren’t above the law in the 90s nor are you above it today 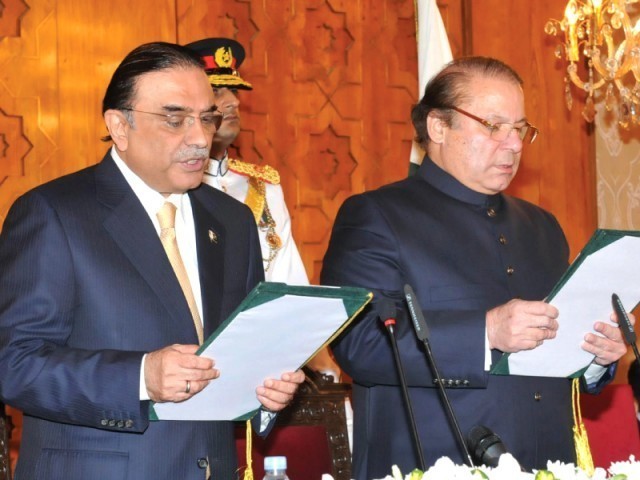 In his fiery and ‘courageous’ speech, followed by his ‘courageous’ exit from the country, Asif Ali Zardari seemingly tried to intimidate the country’s establishment in general and the army in particular.

The speech was filled with direct and indirect attacks at, and threats to the Pakistan Army, apparently as a pre-emptive response to what followed.

It was later that the Pakistan People’s Party (PPP) clarified that these accusations and threats were actually hurled at former army men and not ones currently in service. This was the first of many unbelievably lousy explanations put forth by PPP as part of a damage control exercise.

Some may remember how PPP initially tried to side with MQM but then, sensing how that could expedite the process – in which they were the next likely target, went silent and chose to wait their turn. But as soon as it became imminent, Zardari boarded MQM’s bandwagon and adopted a Altaf style of offensive defense.

After Zardari’s speech and exit, PPP and its co-chairmen remained silent on the matter. But the day Dr Asim Hussain – a former federal minister from Zardari’s term – was arrested, and remanded to Rangers’ custody, all that changed.

First, Mr Khurshid Shah, opposition leader in the National Assembly, delivered a not so subtle message from his boss threatening ‘war’ if a hand was laid on Zardari.

Then came Zardari himself, with threats of dire consequences to Prime Minister Nawaz Sharif for engaging in “politics of vengeance”.

During his stay abroad, Zardari seems to have learnt that the ‘conspiracy’ against PPP is not the army’s or the establishment’s doing, but Nawaz’s. In fact, as part of the damage control exercise, Zardari seemed to praise the army while threatening Nawaz. He said,

“When Pakistani Army is fighting a decisive war against the terrorists and also fighting at our borders, Mian Nawaz Sharif, instead of challenging the real enemy, is targeting People’s Party and other political opponents.”

Zardari’s speech against the head of Pakistan Muslim League-Nawaz (PML-N), the prime minister, has effectively put an end to the ‘politics of conciliation’. Friends have, unilaterally for the time being, become foes.

Some say this may be part of a larger plan to disrupt the on-going operation against corruption and the corrupt. Some say that PML-N is in cahoots with PPP and MQM on this, since they see themselves as next in line. Some believe that since MQM’s resignations failed to create the perception of a political turmoil, a rift between PML-N and PPP may just be another attempt to do just that. But then, all this is just hearsay.

Zardari accused Nawaz of reverting to the “politics of 90s”.

In a way, many believe that we may see a partial re-run of the 90s after all, the decade that saw Zardari being charged, investigated and imprisoned. But I don’t think that’s what Zardari was referring to. He was referring to the pre charter of democracy rift between his wife’s PPP and Nawaz’s PML-N; the times that preceded the politics of ‘conciliation’ and brotherly ties between the two major political parties.

PPP and PML-N were engaged in a tug of war in the 90s. With the help of the establishment, neither let the other rule in peace. Some say it was more about not letting the other loot in peace than rule in peace.

Imran Khan’s version of this conciliation is a ‘loot and let loot’ arrangement between PPP and PML-N, implying thereby that neither party will hold the other accountable for any crimes or corrupt practices. I haven’t yet seen PML-N affirm Imran’s view in words or by implication. Zardari, however, did imply that Imran’s assertion is somewhat accurate. In his speech he said,

“We accepted the results of 2013 General Elections for the sake of democracy, although those elections were Returning Officers (ROs) elections…”

We may doubt the allegations of rigging but Zardari appears to be saying that he knew the elections were rigged, and mandate acquired thereof was fake. Nevertheless, he chose to let PML-N rule in the interest of democracy. Now that gives credence to Imran’s version of PPP-PML-N ‘conciliation’.

So how sound is Zardari’s accusation of reversion to the politics of 90s?

First of all, Benazir Bhutto’s PPP of the 90s was a muscular political party with strong public support throughout Pakistan. Zardari’s PPP has been reduced to a frail provincial party with negligible support in other provinces.

The allegations of a conspiracy against PPP in the 90s are not baseless and have been proven in the Supreme Court. But Benazir’s reception upon arrival in Pakistan in 2007 and the result of the 2008 General Elections showed how the conspiracies failed. But where the establishment failed in the 90s, Zardari succeeded with flying colours in just five years of co-chairmanship. So I don’t think the ‘enemies’ of PPP need a conspiracy anymore, not one to remove Zardari from office at least.

But to keep him there? Perhaps.

Then there is Pakistan Tehreek-e-Insaf (PTI). There was practically no third force in the 90s.

PPP and PML-N took turns at running the country.

Thanks to the own-foot-axing PTI, the nation now has a third option. PTI has already overtaken PPP, and PML-N is more concerned with its new worthy adversary.

Lastly, there is that hearsay about the prime minister not being in charge, so even if it were a conspiracy, it couldn’t have been hatched by PML-N.

So Mr Zardari, I don’t think there’s any conspiracy.

Pakistan does not want a conciliation which puts you, or anyone else, beyond accountability. I can see you have a hand that used to be a good hand in the 90s, but it’s not the 90s anymore and the Sindh card, the Bhutto card, the political victimisation card or the conspiracy card, are not the cards they used to be.