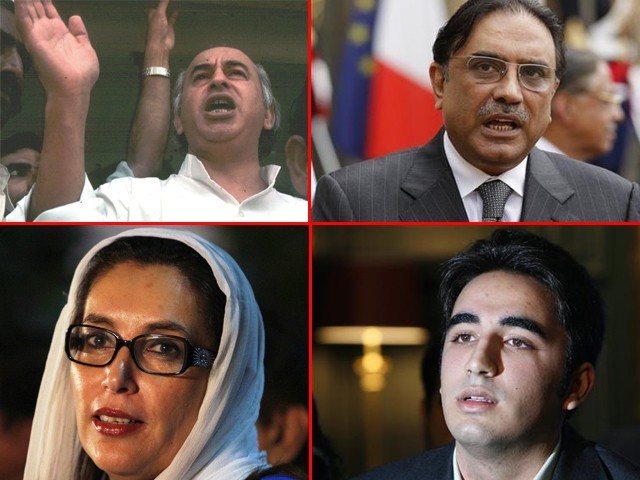 I’m one of the thousands of Sindhis who feel no sympathy for PPP anymore and do not have the same allegiance towards the party as my forefathers did.

(Either the southern rain has the power to fill the Lanba ground, or the daughter of Bhutto.)

Those were the days when Sindhis, both Muslims and Hindus, chose to name their children after the famous Bhuttos. There are many Zulfikars, Bhuttos and Benazirs in Sindh and people once took pride in such names. Similarly, when Zulfikar Ali Bhutto was hanged, many who had named their children Ziaul Haq, changed their children’s names immediately. Now, you will rarely come across a person named Zia in Sindh.

Pakistan People’s Party (PPP) represented the people; PPP represented the icon that was Bhutto. They, in fact, were correlated. But now the Bhuttos are gone, and the ardent following has disappeared as well.

For years, Sindhis have shown reverence and unconditional support to PPP because of the Bhutto scion. But now that era of sympathy seems to have come to an end, since its current leadership has failed to live up to their expectations. The people of Sindh have had enough of disorder, lawlessness, nepotism and, of course, corruption prevalent in the province.

I’m one of the thousands of Sindhis who feel no sympathy for PPP anymore and do not have the same allegiance towards the party as my forefathers did, and hence today, I’m one of its biggest critics.

I am often questioned whether I still support democracy, and if I do, then how can I criticise PPP? Most times, people strangely equate opposing PPP to harming democracy, which subsequently means one supports dictatorship. I am told that bad democracy is better than a good dictatorship and hence I should support PPP.

At times, it even makes me wonder whether I am anti-democratic. But a big ‘no’ echoes back. Thus it leads to a series of other questions – why don’t we feel sympathy for a party we loved so dearly once upon a time? Why do I feel this innate satisfaction when a noose is tightened around the neck of its moguls? Why do we cheer when authorities such the Rangers, Federal Investigation Agency (FIA), National Accountability Bureau (NAB) make arrests in Sindh and conduct a raid on government offices?

I don’t remember a single Movement for the Restoration of Democracy (MRD) when the people stood with PPP during Zia’s toughest era. But I do remember Pervez Musharraf’s time and how people abhorred him as much as they loved PPP.

Do they feel love towards Benazir Bhutto because they are indebted to this selfless woman who had lost her father and two brothers in the struggle for democracy?

But the question is, was there even a struggle for democracy?

Who would have thought the ‘emblem of federation (PPP)’ would be swept away from the country in just a span of seven years?

PPP was brushed aside in Punjab, Balochistan and Khyber-Pakhtunkhwa (K-P) in the 2013 General Elections. Subsequently, in the Cantonment Board Elections, PPP only secured seven seats across the country, and hence, the nation’s biggest and oldest party was shot down to the fourth ranking simply because of its incompetence.

If this was not enough to prove the fact that PPP was standing on a slippery ground, PPP’s leaders continued to harp on about reaching the stars. Recently, in Azad Kashmir, where PPP is a ruling party, it seized six of the eight reserved seats.

Asif Ali Zardari continues to remind us time and again of the Benazir Income Support Programme (BISP), but if this trump card of theirs was sufficient to win over the hearts of the public, it would have translated into winning the elections. But the fact of the matter is that it could not. It was Zia’s mission to finish PPP, but he could not achieve what he aimed to do. Although keeping PPP’s current leadership in mind, I feel Zia’s dream has come true.

Over these seven years, the law and order situation has deteriorated. This can be highlighted by the fact that both the Governor of Punjab Salman Taseer and the Federal Minister for Minority affairs Shahbaz Bhatti were killed during PPP’s tenure. What’s more tragic is that the party could not hold a protest demonstration, let alone arrest the murderers.

Similarly, Karachi remained a battlefield for criminals, murderers, mafias, and political parties until the Rangers swung in to action. A report shows that out of the 1,180 killings in Sindh last year, at least 96.18% occurred in Karachi alone.

Forced marriages are still a common practice in Sindh, so are forced conversions. Women are killed under the pretext of honour and are given in Vani.

Every city of Sindh seems like a trash can and a pond of drainage. There is not a single city in the province that any PPP leader could present as an example of a new, revitalised Sindh.

Moreover, the first and foremost promise the Zardari government made was to arrest the murderers of Shaheed Benazir Bhutto. However, that remains to be a forgotten promise. If a party that could not even gain justice for its founders, how can you expect it to do justice to its people?

The Bhuttos fought for the rights of the people and the democracy of this nation which manifested in striking the right chord with the people.

On the other hand, Bhutto’s son-in-law, Zardari tried to save his power by striking for mufahimat (reconciliation). In all these years, what he could have excelled at was reconciliation, regardless of what price his party paid for it. But evidently, he couldn’t be least bothered about it.

The country’s largest party which is confined within one province is struggling to save itself in its own home town.

After six years of being in power, in September 2014, PPP Chairman Bilawal Bhutto realised that his party had committed mistakes in the past and apologised for these blunders. Bilawal requested the workers to not leave the party and assured them of their commitment by winning back the trust of the people. But his leadership style proved him spineless, since not the slightest change has taken place. Many senior leaders have been side-lined in the party and many were forced to leave.

In Punjab, workers are deserting the party in complete desperation, simply because Punjab is no more of a priority for the party leadership. Remember how Shaheed Zulfikar Ali Bhutto was with the people of Punjab during the floods in the 70s, or Benazir who on the very next day of the October 18, 2007 bomb attack went to Lyari to sympathise with the relatives of the victims?

But of late, when the searing heat wave was brutally killing people in Karachi, the current PPP leaders intended to visit Larkana but instead chose to stay in Dubai. A leadership that has nothing to do with the common man would never garner the support of the people.

3. Corruption, nepotism, and much more

People continue to ask what the PPP government has done for its people in these past seven years. Did their pro-poor and ‘roti, kapra, makaan’ slogans during two of Zardari’s tenures in Sindh materialise into anything productive? I don’t think so.

Town Municipal Administrations (TMAs) have become ATMs for the leaders.

Health, education, and irrigation are not as bad as they used to be, but the entire system as a whole has witnessed a downfall. There are several stories of land grabbing, corruption, and nepotism in rural Sindh.

PPP ministers made a thousand fake appointments in different departments, and many people have paid piles of money to win a job, but they’re still clueless. No one in their right mind would apply for any job in Sindh, as they know that the pre-requisites for any government position in Sindh are two things – money and political favour.

Initially, Zardari acquired the title of Mr 10 per cent, since he would keep most of the allocated budget for a particular project for himself. Recently, Lyari ganster Uzair Baloch spilled the beans on committing murders allegedly on the orders of PPP leadership, including its co-chairman and former president Zardari.

But that’s the past, so let’s bygones be bygones.

However, Zardari has failed to save himself from such allegations even after becoming the party’s co-chairman and elected president. A case in point is the Ayyan Ali’s case. Hostility towards Zardari and his sister, Faryal Talpur, is not only felt on the public level, but can also be seen within the party.

Many officers and politicians who have been arrested have allegedly confessed to corruption in the ruling party. But despite all these facts, when Asim Hussain is arrested in Sindh, it happens to be an attack on Sindh.

Why would people support a party that faces a cyclone of corruption charges?

If one gets a chance to flip through PPP’s newspaper advertisements during the last two elections, all one would see is pictures of Zulfikar, Benazir, and Bilawal splashed over the pages to rein in votes, instead of Zardari himself or Faryal Talpur as epitomes of leadership. But as soon as the elections finished, Zardari and Talpur suddenly showed up again, occupying a large portion of advertisements, replacing the original Bhuttos.

In all these years, Bilawal has just remained a showpiece. There are stories of Bilawal being at loggerheads with his father because of anti-people policies, corruption and other matters. He also ran away from the country and came back silently. He still seems mechanically controlled and is only launched whenever needed.

For example, after the Rangers’ raid on the Sindh Building Control Authority (SBCA), which triggered Zardari’s outburst against the establishment and several arrests were made, Bilawal was the complete opposite and remained calm. Even though Bilawal disagrees with his father, he continues to remain a puppet and I feel he will never be able to muster enough courage to stand up against him. Based on these incidents, it’s clear that he will be unable to bring about a change in his own party.

Now, in the face of corruption charges on the party’s leadership, Bilawal is forced to stay back, perhaps, in order to calm the situation and show the public that he is one of them. But he, as a chairman, finds himself unable to purge his party of the corrupt and the incompetent.

Why would people support PPP, a party that cannot even be controlled by its own chairman?

The author has a Masters degree in Mass Communication from the University of Sindh. He tweets as @Muneshkumar15

A farmer’s struggle for education, but will his dreams come true?