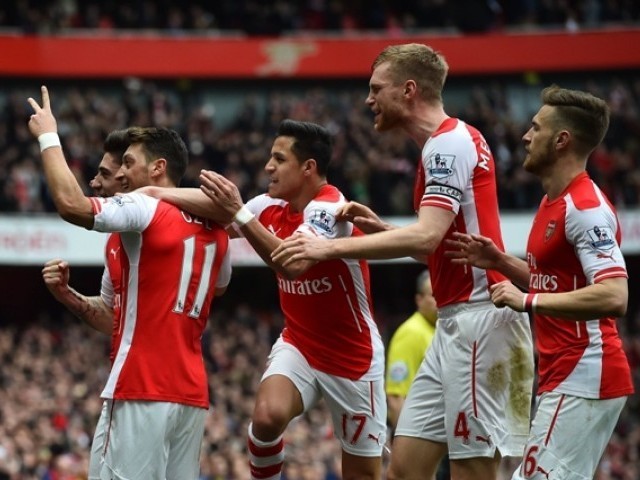 Well deserved: Three goals in the final eight minutes of the first half stunned Liverpool, while Olivier Giroud bagged his seventh strike in six Premier League games to give the Gunners a well-deserved lead. PHOTO: AFP

I have been an avid Arsenal fan for over a decade. After several years, the current team has me excited again. Starting the campaign with a win against the former champions, Chelsea, and lifting the Community Shield is as good as it gets for Arsenal fans.

It’s not the perfect squad and it might not even mount a lasting challenge for the league, but that is what you get with an arrogant, stubborn, and legendary coach, Arsène Wenger. As fans say,

“In Arsene we trust.”

Starting at the back, defence has been a problem area for years, especially after the departure of Sol Campbell, Ashley Cole, and defensive midfielder, Patrick Vieira. However, this season Arsenal has a robust and confident defence. The marquee signing of Petr Cech from Chelsea and the maturing of Laurent Koscielny and Per Mertesacker as the centre-back position, make an ideal combination of speed, size, and experience. Cech has already earned a point for Arsenal this season with his rugged performance against Liverpool.

Arsenal’s central defensive positions are further bolstered by the young Gabriel Paulista and Calum Chambers, two players bursting with potential and a far cry from the days of Emanuelle Eboue, Johan Djourou, and Phillippe Senderos. Also, David Ospina is a decent backup for Cech compared to the blundering Wojciech Szczesny. This provides the team with the depth it was lacking in the defence field over past seasons, especially while competing in four competitions, the Premier League, Champions League, Football Association Challenge Cup (FA Cup) and the Carling Cup.

In the right-back position, Arsenal has Mathieu Debuchy and Hector Bellerin; both are competing with each other for a place in the team. The only weak link in the defence section is the left-back position with Nacho Monreal and Kieran Gibbs, both of whom are inconsistent and better at attack than defence.

Arsenal left-backs Kieran Gibbs and Nacho Monreal are both doubts for the English Premier League game against Southampton. Photo: Reuters

The above defensive line up for Arsenal’s fans is god sent as compared to the past, when half the match was spent praying and hoping that the opposition strikers save the goalkeeper from embarrassment by shooting at the corner flag instead of the goal.

Turning to the midfield, Arsenal had scarce options and finally figured out the correct balance between attack and defence. The most standout performer without doubt has been Francis Coquelin, who has finally filled the void left by Viera.

The defensive midfield position has haunted Arsenal. The list of misfits over the years include, Gilberto Silva, Denilson, Abou Diaby, Alexandre Song, Mathieu Flamini, Mikel Arteta etc. Some were interested in attack not defence, others were injury-prone, and there were those who should have never been bought. Coquelin is great at breaking up play, passing and positioning. He’s always present, always involved in the action, and in a few years will be amongst the best defensive midfielders in the game.

However, midfield is not just about giving cover to your centre-backs; it must also provide support to your strike force, create opportunities, and score goals. Santi Cazorla, Jack Wilshere and Aaron Ramsey sit at the heart of Arsenal’s midfield and so far they have done a decent job. Not to mention, Arteta has finally found his true place in the squad, the bench.

Wilshere’s injury record is ruining the career of arguably England’s best young midfielder. One can never forget how this young dynamo dominated the field against the likes of Xavi, Andres Ineista and the demigod Lionel Messi in the Champions League match against Barcelona in 2011. He earned praise from the likes of the England legend Steven Gerrard, who saw him as his replacement in England’s international squad. The trio of Coquelin, Cazorla and Wilshere would give any team a run for their money.

Unfortunately, the same could not be said for Ramsey, since returning from his horrific injury he has never been the same. His effort is exemplary but he is not in the same league as Cazorla or Cesc Fabregas.

Despite the talent mentioned above, the players that send tremors through Arsenal’s opposition are its wingers. Arsenal’s midfield is truly lethal when you add the name of Alexis Sanchez and Alex Oxlade-Chamberlain to the above trio. However, the gunners’ record signing Mehsut Ozil and the overrated Theo Walcott have been disappointing. Summing up Arsenal’s strength and depth in the middle of the park can only be rivalled by the likes of Chelsea and Manchester City in the league.

This brings us to the final third of the pitch. The only area that worries me and most fans this season is the strike force. A good defence can earn you a draw but not a victory. To win, you need to score and in that respect, few can rival Alex Ferguson’s genius. If Louis Van Gaal wants to keep his job, he probably needs to learn from his predecessor. Arsenal fans are complaining despite having Olivier Giroud, Danny Welbeck, Walcott, and Joel Campbell. One can only imagine the nightmare Manchester United fans are going through given a fat Wayne Rooney, alienated Javier Hernandez and untested Memphis Depay.

Coming back to Arsenal, since the departure of Thierry Henry, the club has never had a world class poacher. The injury-prone Van Persie was also sold at the wrong time, just like Samir Nasri and Fabregas. Niklas Bendtner was at best a second division striker. Olivier Giroud is a decent striker but not someone who can rival the likes of Sergio Aguero or Diego Costa.

Arsene Wenger’s stubbornness over the years to splash the cash on a world class striker has probably cost Arsenal dearly. The lack of strength and depth in this department has seen Arsenal smashed in many seasons. Over the past few years,  Arsenal have been on top of their league at least twice around January, only later falling to a miserable third or fourth position by the end of the season. This is the only area that dulls my enthusiasm when watching Arsenal play.

Arsenal manager Arsène Wenger has brought his club to the top spot in the Premier League with some attractive football. Photograph: Ben Stansall/AFP/Getty Images

I would conclude this assessment by pointing to the fact that a few years ago, Arsenal had a weak defence, a midfield that lacked options, and a strike force that had neither quality nor depth. Two of the above three problems have now been rectified: Arsenal’s defence is among the top three in the league and the same is true for our midfield, but it’s strike force is at best, mediocre.

If by some magic wand, the team can cast a spell on Wenger and sign a top striker in the future, then Arsenal would surely be genuine title contenders this season. However, even in the absence of such fantasies coming true, the current Arsenal squad still provides a glimmer of hope to its fans and promises a thrilling season.