Ashraf Chaudhry, slut-shaming is not ‘freedom of speech’ 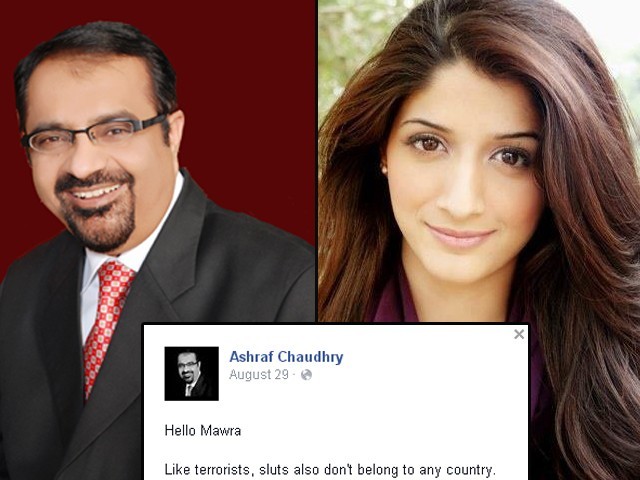 A woman who freely expresses herself on Twitter, or a woman who goes to work, or a woman who comes home late at night, is not labelled a slut because you genuinely question whether she is involved in sexual activities but it is a way for society to diminish the role of women.

A country must be a mother. No other person could suffer so much at your hands and still call you its own.

We are quick to stand up in arms when the sanctity of our adopted mother is called into question. We are often told,

“The sovereignty of Pakistan must come first.”

There was a similar visceral reaction in Pakistan to the trailer of the Indian movie Phantom. It doesn’t matter that Hafiz Saeed is a terrorist, since for many, he is a Pakistani first and India is the enemy. So in this war that we have inherited, we are bound to side with our own, even if it comes at the discomfort of siding against Katrina Kaif.

A lot has been said about the movie; video blogs have been made and nationalism has been used by many to promote themselves. However, my blog is not about this particular issue per se, as my opinions on the matter only distract from the point of this blog. I realise that this proviso will not stop the tirade of India versus Pakistan comments, but before you transform into a keyboard, please take a minute to think whether your nationalism is making you lose your humanism.

When a woman is insulted in Pakistan, a common rebuke is,

“What if she was someone’s mother, someone’s sister or someone’s daughter?”

As if devoid of that possibility there is no need to respect women. A woman cannot be respected for being a woman, she has to be somebody’s mother, wife, daughter, sister, cousin; her very existence is defined in terms of her relationship with a man. Her respect comes from the house she belongs to, the man she is married to or the man she gave birth to.

Unfortunately, we do not even extend that courtesy when other countries are insulted. All of us have a right to disagree with the policies of any state, we also have a right to criticise the state itself but to paint every single citizen living in that country with a single broad brush stroke, based on the actions of a few, is foolhardy.

It creates the ‘us versus them’ siege mentality which makes people resort to violence.

A Facebook post may not be considered ‘violence’ per say but within the context of the society we live in, labelling somebody a traitor publicly does seriously jeopardise the life of the person. Our ‘Pakistani’ actors should have more prudence before passing statements about their co-workers.

However, they do have a right to their opinion, their position of power means they should act with more responsibility but if they still feel the need to, they are to express themselves. This is not a blog against Shaan Shahid or Hamza Ali Abbasi. This is a blog against Ashraf Chaudhry, the self-proclaimed number one sales trainer in Pakistan, and an expert on ‘selling yourself’. He decided to firm nail his colours to the past by chiming on with his opinion on the issue. Chaudhry showed the country that there was no need to label Mawra Hocane a traitor to make the nation dismiss her opinion, there was an easier way.

Following Chaudhry’s logic, if a woman expresses an opinion that you may not agree with, you gain the right to publicly call her a ‘slut’. When you are called out by people for your blatant misogyny, your retort is to innocently wonder, “What name would you give her”, along with posting a picture of her.

Also championing freedom of speech (his ‘freedom’ to call Hocane a slut) while blocking anyone who disagrees with him. I am assuming ‘irony’ is not one of the modules Chaudhry teaches.

You are a person who dismisses sexual harassment as #BurgerBoysProblems. If a male teacher sexually harasses a 20-year-old boy, the boy should reclaim your ‘manhood’.

It would be unfair to even single out Chaudhry. He may not even believe in all of this, after all he is an expert on selling himself, and controversy creates cash. By abusing Hocane and posing as a nationalist, Chaudhry has been able to remarkably increase the traffic on his page.

He is now using that same traffic to post a video promoting himself after every couple of hours.

Chaudhry is not the tragedy. The tragedy is that he represents a majority of men in Pakistan who casually slut-shame women. When confronted, they would not disagree with the fact that women have equal rights and equal freedom as men but use their words like arrows to shoot down those freedoms and rights for women at every turn.

Would he have called a male actor posting similar tweets a slut?

Slut-shaming is a legitimate power tool used by men to keep women down, to promote the structures of patriarchy. This tacit behaviour by men, and their opinions influencing the masses, perpetuate patriarchal structures in society. Any time you tell a person to be a man, or be a woman, you are reproducing traditionally defined gender roles.

A woman who freely expresses herself on Twitter, or a woman who goes to work, or a woman who comes home late at night, is not labelled a slut because you genuinely question whether she is involved in sexual activities but it is a way for society to diminish the role of women.

Chaudhry’s comments do not hurt Hocane, as much as they hurt all the women of Pakistan – even women who may agree with him and disagree with Hocane on the matter. Her opinions on the subject have no bearing on this discussion.

The point of this article is that patriarchy and misogyny have been reproduced in our country by tying these notions to nationalism. The archetype of the Pakistani woman is used to deliberately relegate women to an inferior role in society. Ziaul Haq took this strategy a step further by adding religion into the mix.

It does not matter if your intention was not to stifle space for public discourse for women by calling one person a slut, the fact that you were negligent enough not to realise the repercussions of your actions is enough to deem you guilty.

Being nationalistic may get you a few likes or a few followers but by exploiting people’s love for our country, using it to ‘sell yourself’, please make sure you are not hurting a cause that generations have worked hard for. We may never be able to reverse all the violence against women committed in the name of the nation and religion in our country but the least we can do is be conscious of that history before looking to belittle a woman.