For PTI, it’s either ‘yes’ to by-elections or ‘bye’ to elections 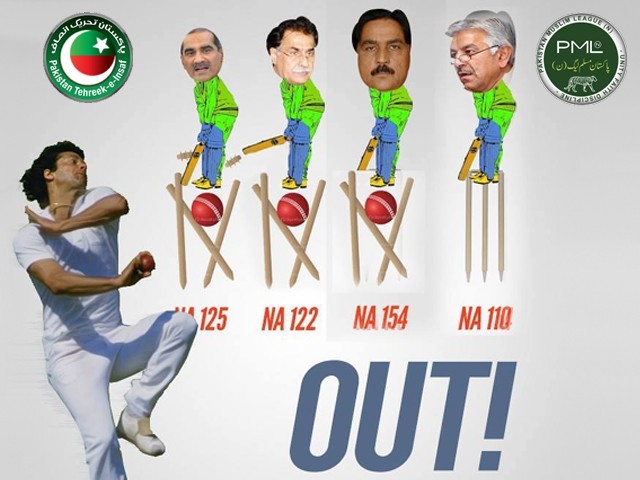 Election tribunals have ruled in favour of PTI in three out of four ‘sample’ constituencies handpicked by the PTI chairman. PHOTO: PTI OFFICIAL/UDAROFFICIAL FACEBOOK PAGE

Imran Khan had sought investigation in four constituencies to ascertain whether the General Elections 2013 (GE 2013)were rigged or manipulated. Election tribunals have ruled in favour of Pakistan Tehreek-e-Inshaf (PTI) in three out of four ‘sample’ constituencies handpicked by the PTI chairman.

Imran also demanded for the formation of a Judicial Commission (JC) to probe rigging in the GE 2013 on an overall basis. A JC was formed and no rigging or manipulation was proven. In its report, the JC rejected all allegations of planned rigging but pointed out grave irregularities by the Election commission of Pakistan (ECP).

Of the three election tribunals that ruled in favour of PTI candidates, one has held the winning candidate guilty of illegal practice, NA 154, where the degree of the independent winning candidate has been found fake. The other two tribunals have declared elections in these constituencies void as a whole on the basis of large scale irregularities on part of the ECP and NADRA.

In addition to election tribunals that adjudicated upon reservations regarding elections in individual constituencies, the JC inquired into the GE 2013 on an overall basis. The trend visible in 49 tribunal decisions where petitions were accepted, coupled with final report of the JC leads to two conclusions.

1. PML-N or any other person’s involvement in a conspiracy to rig and manipulate the GE 2013 has not been proven. This assertion has failed to acquire the status of a fact and remains a speculation or an allegation, although the number of believers in this speculation has not changed despite JC’s report.

2. The ECP largely failed in fulfilling its constitutional obligation under Article 218(3). There were irregularities and shortcomings owing to the ECP, returning officers and other election staff. In many cases, the ECP staff failed in their pre and post poll duties which has put a huge question mark on the GE 2013 and mandate acquired thereof.

Post JC report, PTI was pushed to a defensive position. Tribunal verdicts in NA-122 and NA-154 have been used well, with some help from the media, to once again put PTI on the front foot. Now it is PML-N’s turn to respond.

Opting for by-elections instead of applying delaying tactics by going to the Supreme Court seems to be a wise decision on PML-N’s part. All three constituencies are from Punjab where PML-N rules. PML-N has fared well in the Cantonment Board Elections recently and there are indicators that PML-N is still ahead of PTI when it comes to popularity among the masses.  JC disproving PTI’s allegations and PTI’s internal turmoil have brought PTI’s popularity down a notch. PML-N knows that PTI is capable of regaining lost ground and thus the sooner by-elections are held the better.

PTI, on the other hand, seems unsure of its fate in by-elections. The party faces internal rifts, which have dimmed out owing to two consecutive victories in tribunal decisions. However, by-elections, nomination of party candidates, and election campaigns may re-ignite the dying flames of internal turmoil. But the fact that PML-N rules Punjab can and may work to PTI’s disadvantage.

If by-elections are held, it is absolutely crucial for PTI to bag all three seats or at least two of three. A loss in two or more seats from the constituencies that Imran alleged were snatched from him through rigging, coupled with a loss in the local government elections may end the hopes of a victory in 2018 General Elections for good.

They will probably boycott the by-elections and perhaps the local government elections too.

PTI claims to have lost all confidence in the ECP. Imran has demanded resignations of the four ECP members from four provinces in light of JC’s final report and dissatisfaction over ECP’s performance therein. Pakistan People’s Party (PPP) is also towing PTI’s line; this may be owing to completely different reasons that have more to do with the Karachi operation than reservations regarding GE 2013.

Nevertheless, PPP along with PTI makes for sufficient pressure on the PML-N government.

PTI along with other political parties may take a justified stand for the reformation of the ECP and implementation of electoral reforms before any by or local government elections. For the first time in decades, Pakistan’s electoral shortcomings and irregularities have been brought out in the open; it would be criminal to hold another electoral exercise without having addressed them first.

One cannot predict with certainty the winner of fair by-elections in NA-122, NA-125 and NA-154, but PTI needs to be certain of its victory before jumping in. It would be interesting to see whether Imran jumps in with his trademark overconfidence, or does he opt for keeping his chances alive for the next General Elections.