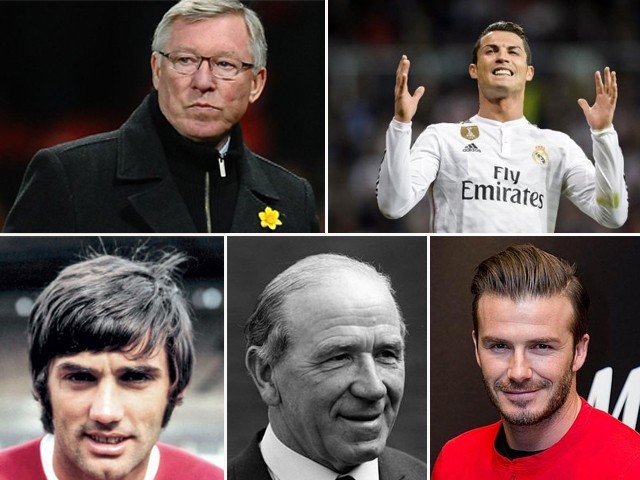 Manchester United’s success and prominence has been led by some of the clubs most significant personalities that have guided United to such distinctions.

According to a 2015 issue of Forbes Magazine, Manchester United became the richest English club, boasting of $3.10 billion as their net worth, as well as being ranked third in the world after the two Spanish giants, Real Madrid and Futbol Club (FC) Barcelona.

Recently, United revealed its new Adidas home kit and it is reminiscent of their shirts from the 80s and 90s. They had signed a 10-year deal worth £750 million in partnership with the Premier League club, allowing themselves to climb the ladder of success.

United’s success and prominence has been due to some of the clubs most significant personalities, who have guided it towards such distinctions.

The top five personalities who have escalated the United brand to such great heights, according to me, are as follows:

He was the first global football star United had. Some argue he was the best United player, particularly after he led the team to the pinnacles of European football by winning the European cup in 1968.

George Best had combined graceful balance, power on the ball, lethal finishing, and the capacity to slalom through defences. He also won the Ballon d’Or in 1968 and topped the league scoring charts for five consecutive seasons. Such was his charisma and talent that he became one of the first high profile celebrity footballers, earning the nickname ‘El Beatle’ in 1966.

In 2008, the statue containing the trio of George Best, Denis Law, and Sir Bobby Charlton was erected outside Old Trafford known as the Holy Trinity.

The boy from Madeira is without any doubt, the best player to have played for United. Ronaldo’s football skills, as well as his impeccable style, made him an international star. His popularity speaks volumes. He even has a global brand ‘CR7’ named after him. I feel United made one of their smartest decisions by signing him in 2003 for a whopping £12 million.

The 2006 World Cup incident led to the transformation of Ronaldo from a mere boy to a genuine world class player. Winning the league in 2006-07 and producing an even more brilliant season in 2007-08, where he ended up scoring 42 goals, and winning the English Premier League (EPL) and the Champions league title. He became the second United player, after George Best to win the European Footballer of the Year.

Sir Alex Ferguson described Ronaldo in his autobiography as,

“The most gifted player I managed. He surpassed all the other great ones I coached at United. And I had many.”

Beckham is an indisputable global sporting star who took United to a whole new level of recognition with his marketability and celebrity image.

Even movies like Bend it like Beckham were made in acknowledgement of this great footballer’s on-field strikes, and his equally famous hairstyles that have been copied throughout the world. Every step by this iconic player has been scrutinised by the British press. Be it his goal from the halfway line, when he chipped the goalkeeper against Wimbledon, or his marriage to pop star Victoria Adams, also known as Posh Spice of the Spice Girls, or his sending off in the 1998 World Cup after kicking Diego Simeone.

Moreover, his injury before the 2002 World Cup, made the term Metatarsal bone more known amongst football fans. Even his clash with Sir Alex Ferguson was massively publicised.

Apart from the media publicity, Beckham was an incredible footballer, with a gifted right foot and tremendous bending free kicks and crossing ability, but it was his sheer stardom that helped United become a genuine global sports brand.

Matt Busby remained in charge of the United team for 24 years, leading them to win five league titles. Matt Busby’s philosophy was that football should not only be about winning, but also about thrilling the crowd, and this greatly helped in pleasing dissatisfied spectators. Similarly his playing style was free flowing and led to free scoring football.

Matt Busby will always be remembered for rejuvenating the United side after the Munich air crash in 1958, in which nearly the whole team died. Hence he returned as manager the next year, reassembled a new team, and eventually won the European cup 10 years later.

As a tribute to his achievements, a statue of Matt Busby is erected in front of Old Trafford. He will always be remembered as the man who laid the foundations for the global club which United has evolved into today.

Sir Alex Ferguson was a disciplinary as well as a dictator. He has been the biggest influence in making United a global brand, as well as one of the most successful football clubs.

He has been the longest serving United manager, with 27 years at the helm. He laid the foundation with the induction of youth programs and youth academies, employed a number of scouts, and insisted on bringing young talent to the top. His philosophy was based on signing mostly young players, who were hungry to win trophies.

Ferguson’s greatest accomplishment was taking over a mid-table United team in 1986 and converting them into the best team in England. His best season came during the 1998/99 season, in which United ended up winning a treble. During his 28 years at the club, he won 38 trophies.

Being an ardent fan and supporter of United, I can say with full belief that the aforementioned players along with their dynamic personalities and skills have converted Old Trafford into the theatre of dreams and helped them become one of the biggest and famous clubs in the world of football.