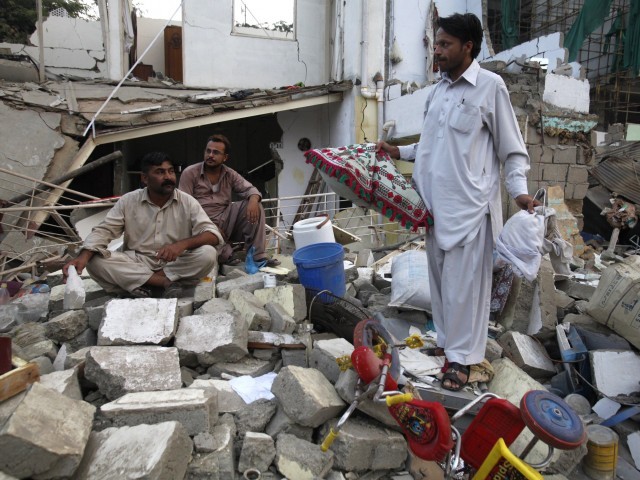 The attack on the Crime Investigation Department (CID) building killed at least 16 people and injured over 140. PHOTO: REUTERS

Karachi saw terror once again on Thursday night when a suicide bomber struck an area referred to as the highest security zone in the city, meters away from the Sindh Chief Minister House.The attack on the Sindh police’s main investigation agency, the Crime Investigation Department (CID) building, near PIDC killed at least 16 people and injured more than 140.

Incidents of terrorism have become a frequent occurrence in Karachi as the menace of militancy continues to spread.

We asked Tribune bloggers about their views on rising militancy in the city in the context of the recent attack.

One can’t help wondering that given the similar pattern of attacks  (FIA, Peshawar attacks etc) why were suspected terrorists kept and interrogated in known locations in highly sensitive areas. After a long history of militancy in the country such a lax attitude from agencies is questionable. The problem with such buildings being located in the populated areas is that it not only, that the extent of the damage is maximised but that people are terrorised on a massive scale.

The unfortunate truth is, that militant organisations like Tehreek-i-Taliban Pakistan and Lashkar-e-Jhangvi will continue to retaliate this way if their top guns are arrested. Decision makers need to think about what it is these groups are trying to say, since looking into their perverted minds may help security officials to pre-empt potential attacks, or deploy more security to sensitive zones.

CNN reports that Azam Tariq, the spokesperson of the Pakistani Taliban, has claimed responsibility for the suicide attack on the CID’s office near the PIDC building in Karachi. He has also asserted that these bouts of violence will persist until the military operations against the Taliban are relinquished. The Taliban have been brainwashed into considering the politics of vengeance as external jihad. It is thus ironic to see that those who call themselves the guardian of ‘pure Islam’ are actually exploiting its precepts to secure sectional interests.

Terror attacks in the country have become such a frequent occurrence that they fail to shock one any more. Each attack brings new promises from the authorities about measures being taken to deal with the terrorists and about investigations being launched. The investigations, however, fail to stop future attacks from occurring. What is needed is for the authorities to look into the causes behind such attacks and a sincere attempt to understand the mindset that propels them.

Why couldn’t the same security that was provided to the US Consulate, be provided to the DIG CID office that was blown away engulfing many homes in the destruction? There was an even bigger concern this time round because there were reports of a terrorist being detained in the building that came under attack. Where did he go after the attack? No one knows — atleast for now.

Everytime such an incident takes place we see the same panic and chaos. Why don’t we see public awareness messages in newspapers, on television or the internet about how to handle such situations? Are we supposed to hide under our tables or run like crazy people on the roads when we hear a bomb go off in the city? The media needs to spread awareness about how people should react in such situations.