Aamir Khan sometimes cries – Get over it 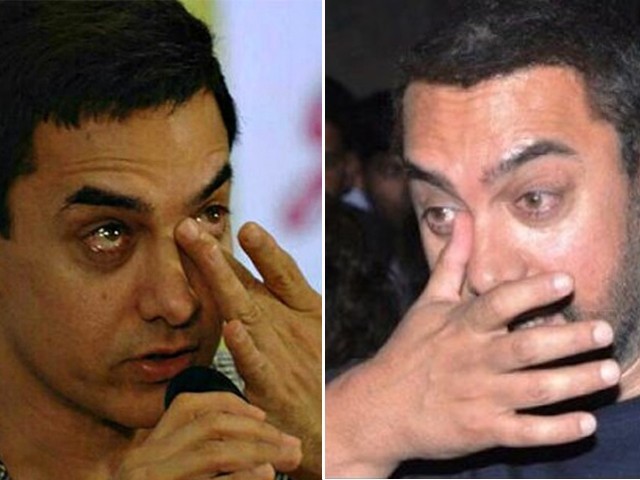 Aamir Khan was widely forgiven for his first weeping offense after watching Bajrangi Bhaijan in July.

In a rational universe, no man would ever be turned into an internet meme for doing what psychologically healthy humans are naturally predisposed to do – cry.

Aamir Khan was widely forgiven for his first weeping offense after watching Bajrangi Bhaijan in July. The episode was popularly attributed to the film’s earnest portrayal of a man’s conquest of inter-religious strife, capable of making even grown men cry.

A second tear-sighting within a month, was ostensibly too much for the public to shrug at. In an interview with NDTV, director Nikhil Advani revealed that Khan cried profusely during the screening of ‘Katti Batti’.

Let’s take Advani’s word for it. Let’s disregard the obvious hyperbole about him ‘literally’ holding a box of tissues for Khan during the final 22 minutes of movie, and assume that it actually happened. Let’s ignore the fact that Advani has figured out that Khan’s lacrimal secretions may grant Katti Batti the same added publicity that they magnanimously bestowed to Bajrangi Bhaijan. Because the ‘tear jerkiness’ of a Bollywood flick is now officially being gauged in millimetres of tears shed upon it by the star of PK.

Assuming the veracity of it all, why would a man’s appropriate tearfulness at an emotionally charged event – whether it be Floyd Mayweather at a press conference, or Chris Pine at the Oscars – invite such an intense reaction from the public?

I use these examples in particular to limn the universality of this phenomenon, where men are shamed for not repressing their emotions. John Boehner, Speaker of the United States House of Representatives, has been lampooned by essentially every American institution of comedy from Bill Maher to Saturday Night Live, for getting misty-eyed too frequently. Boehner offers comedians a cornucopia of political material to satirise, yet we’ve latched ourselves to the least joke-worthy thing about him.

I’m at the cusp of having my own membership from the cult of manhood revoked, for the ease with which I’m personally driven to tears. I am known among friends for taking long drives for the explicit purpose of having a good cry, facilitated by a playlist including, but not limited to, ‘My Immortal’ and ‘The Sound of Silence’.

It’s not unmanly, juvenile, or even necessarily indicative of depression; it’s cathartic.

The association of emotional expressiveness with femininity partly explains society’s disapproval of it. Womanhood denotes weakness, and so does any characteristic archetypically linked to it. ‘Boys don’t cry’ is a meaningless canard in a natural order where boys, and even grown men, are clearly inclined to cry when traumatised. ‘Cats don’t meow’ means nothing, when we’ve established that they actually do that.

The social media’s inexplicably exuberant reaction to Khan’s teariness at the end of a genuinely sad flick probably has Madhuri Dixit rolling in tears of her own, along with the rest of the crew responsible for the heart-warming ‘Start With the Boys’ campaign.

You may remember the short film running on Indian channels starting last October, about the society browbeating boys into hiding their tears, until they emerge as the emotionally repressed zombies we expect them to be. The ritualistic clogging of Twitter with memes and jokes about Khan crying is evidence that we’ve learned little from that campaign.

Air Hostess: Sir, would you like to have anything? Tea? Coffee? Juice? Aamir Khan: Tissues

We’re perhaps the only species deeming our own physiological bodily responses ‘improper’, in favour of a daft social construct that causes actual harm to our psychological wellbeing.

Men were not put on earth exclusively to play cricket and Grand Theft Auto and in the lucid intervals where they are not beating each other raw for ‘looking at them weird’, get together and laugh at girls for their allegedly labile emotional state.

There’s nothing to be gained by glorifying insensitivity and shaming all that makes us human.