Can a journalist in India write against Modi or the RSS? 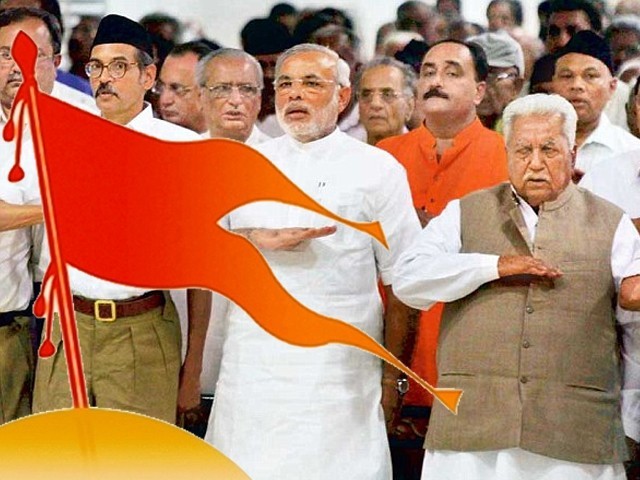 A few days ago, a journalist friend of mine was laconically told by his editor that he would not be allowed to write against Prime Minister Narendra Modi, the Rashtriya Swayamsevak Sangh (RSS) and the Bharatiya Janata Party (BJP), apparently because “we should allow the BJP government to enjoy its honeymoon for a while”.

Ironically, the very next day, I was told that the very same editor wrote a pro-Modi article, eulogising the Hindu nationalist leader to the extent that would make the bhakts (admirers) explode with delight. When he protested and entreated the powers-that-be to vent his views on critical issues plaguing the country, he was told to promote his ‘agenda’ by writing personal blogs. Pish!

Social media warriors from the saffron brigade are always ready to pounce on anyone like wild beasts at the drop of a hat. Any opinion criticising Modi, the BJP, and RSS elicits sharp reactions, expletives, and even threats from the uncouth Bhakts, and it’s worse if you are a woman.

Ask senior journalist Sagrika Ghose who in 2013 was threatened with things such as “gang rape and stripping” on Twitter by right-wing nationalists. Things got out of hand when her teenage daughter’s name and details of her class and school were tweeted too.

“It was very disturbing. I didn’t know what to do. So for a few days, I had her picked up and dropped off to school in our car and not via public transport, because I was really scared,” said Ghosh.

“Targeting me for my journalism is fine. But when it is sexist and foul-mouthed abuse which insults my gender identity, I get incredibly angry. In the beginning, I used to retaliate, but that would lead to more abuse,” Ghosh said, adding that, “the abusers are right-wing nationalists, angry at women speaking their mind. They have even coined a term for us – ‘sickular’.”

Furthermore, journalist Vidya Subrahmaniam filed a police complaint in 2013 claiming that she had received at least 250 calls from unknown numbers threatening to ‘bomb’ her for an article she had written on Sardar Patel. Subrahmaniam said the callers claimed affiliation with the RSS and VHP and were largely from Tamil Nadu. She said,

“The background to this is an article on the RSS which appeared today (October 15th) in the Tamil edition of The Hindu. The original appeared in The Hindu in English on October 8, 2013 under the title: The forgotten promise of 1949.”

Today, such is the atmosphere of fear and intimidation in India that the media can be seen crawling when it has not even been asked to bend. There’s a self-imposed censorship and those who dare to speak the truth and criticise the saffron party are victims of personal attacks and usually get abused.

For instance, on July 14th, the hashtag ‘#ShameOnTOI’ started trending on Twitter after the Times of India quoted the BJP President Amit Shah as saying that it will take 25 years to realise ‘achhe din’ (good days) promised by Modi, which according to him was supposed to happen within five years.

However, Shah, who had earlier found himself in a fix over his remark referring to PM Modi’s promise that “Rs15 lakh will be deposited in the bank accounts of all Indians once black money is recovered” was just a political jumla (idiom), on this occasion sought to clear the air over achhe din. The BJP supremo was quoted as saying by the newspaper,

In Bhopal, Shah was reported saying that in the broader perspective, achhe din meant restoring the pride which India enjoyed before the British raj.

Anybody who had the chance to watch Shah’s speech would agree with each and every word the newspaper reported. But apparently the truth is a bitter pill to swallow for some.

The bhakts trolled the Times of India (TOI) and the author like never before. Here’s a look at some of the condemnable tweets.

Friends we are trending #ShameOnTOI at 5th position in India. Push it to Top 1.. Tweet with #ShameOnTOI pic.twitter.com/2ksOPKUU8N

Now the time is running against @timesofindia Such media houses which plays with journalism should be banned. #ShameOnTOI

Things are not different in Bangladesh either, where several atheist and secular bloggers have been brutally murdered of late for speaking their mind.

In Pakistan, Sabeen Mahmud was killed, on April 24 this year, by na maloom afraad (unidentified men) in Karachi. It was the reaction of the people of Pakistan, especially the youth, to her unfortunate, untimely demise which made me realise what she meant to them.

According to those who knew her, she was a beacon of hope, the best of Pakistan, the light at the end of the tunnel, a wonderful human being and a woman on a mission; to reunite hearts that have been torn apart. She was indeed the change we wished to see and needed in the world.

As per her close friend and BBC journalist, Ziad Zafar,

This is why it appals me when people like Saif Ali Khan say that they have lost faith in Pakistan. No sir, you just cannot lose faith in a country that can produce a gem like Sabeen. I, however, want to take this opportunity to let Saif Ali Khan know that like many Indians, I lost faith in his acting skills a long time ago. This is the dilemma faced by ‘minorities’ in India and Pakistan. They have to prove their ‘patriotism’ by bashing others.

The appalling murder of Sabeen brings to the fore the challenges that human rights defenders and journalists face in Pakistan. TV anchor Raza Rumi was attacked in Lahore in March 2014. His driver was shot dead and a guard was injured by unknown assailants in an attempt on Rumi’s life.

“I was lucky to escape alive,” Rumi wrote in an article in the New York Times, adding that, “The police later claimed that Islamic extremists were responsible.”

In May 2011, investigative reporter Saleem Shahzad was murdered following his allegations of links between the Pakistani military and al Qaeda. Moreover, there have also been multiple attacks on the offices and staff of The Express Tribune in the last two years.

According to a report published by the Committee to Protect Journalists (CPJ), since 2010 as many as 16 Pakistani journalists fled their homeland due to work-related persecution. Three out of those 16 journalists have been able to return to the country.

Among those still unable to return include journalist Rumi, who had to flee after he was attacked in Lahore. Therefore, things as they stand are pretty bad in Pakistan, but are they any better in India?

You see, it is scary when you realise that the fascism you abhor is not limited to the corridors of power anymore and the government that is destined to rule you slowly creeps into your workplace, educational institutes, and family surroundings.

When efforts are made to muzzle one’s voice, when one is bullied in person and on social media for speaking his mind, when one’s articles against a particular ideology are disregarded on unjustifiable grounds, it dawns upon us how precious freedom really is. The fact of the matter is that only insecure people with weak ideologies resort to such tactics such as trying to suppress the voices of dissent.

The big question is why is this happening? Why have we become so intolerant? Why is there so much aggression in our words, thoughts and actions?

“We have to look within and cleanse our hearts.”

The RSS aka BJP seem to be promoting mediocrity which can be seen in its attempt to impose a run-of-the-mill TV actor Gajendra Chauhan as chairman of the prestigious Films and Television Institute of India (FTII) in Pune. For the last two months, the FTII students have been protesting over their legitimate demand of Chauhan’s removal. The government should pay heed to their valid concerns.

Verily, mediocrity runs rampant in the RSS, which is adorned with the great sages and sadhvis, in other words, the jewels of India. I do not have the gumption to write a word against the holy ones, lest their one curse should at once turn me into an ebony stone and send me directly to hell, heaven or even Mars, for their powers know no bound, their knowledge is unsurpassable, their divinity unquestionable.

Let’s not invite their wrath on our poor souls.