US unhappy with political game of Obama’s Asia tour 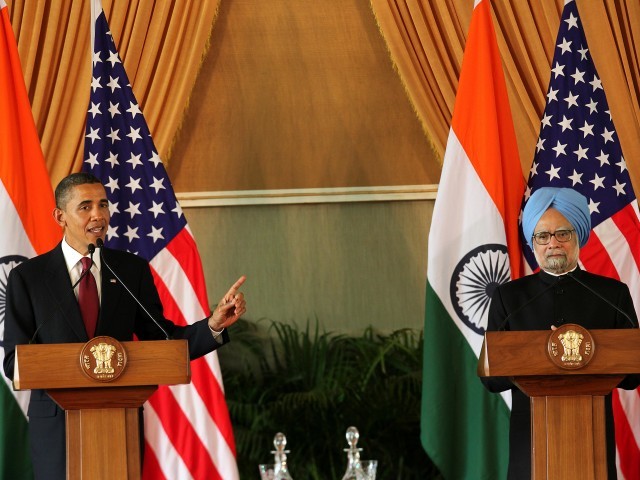 I want to write about Obama’s Asian tour, but I keep realising that I’m stupefied by the complexity and the pageantry of it all. From America’s view, South Asia is a diplomatic cesspool, confounded by the fact that much of this uncertainty stems from our own past and present policies.

When Obama returns to the White House, he will have visited five countries—Japan, Singapore, South Korea, China and Indonesia. But, barring the G20 Summit, the bulk of press coverage will focus on two of those countries—Indonesia, because of Obama’s personal connection, and India—as well as another country not on the itinerary. The press wants to know: what does Islamabad think about Obama in New Delhi?

Obama’s Asia trip has nothing to do with Pakistan

The most obvious answer is: nothing. This trip has nothing to do with Islamabad—why should it? Another obvious response—isn’t $2 billion in weapons, or $7.5 billion over five years, enough to buy some peace—bad pun intended?

The truth, both in-between and unrelated, is better pondered by someone more knowledgeable than me. But I ponder anyway, and this is what I’ve come up with: Obama’s tour is definitely about weapons—$15 billion worth, plus a couple of nukes for good measure. It’s more about China, less about Indonesia, and even less about the Indians who died in the 2008 Mumbai attacks. But it is about terrorism, or at least, it’s about the potential for increased terrorism on US soil, and it is about capitalism, and maybe it’s even about democracy. To put a long story short—Obama’s trip is about America’s interests, in whatever geographic form they come.

And on this trip, America’s interests lay in India’s burgeoning economy. India’s gross domestic product is over $1 trillion annually, and 250 million middle-class Indians form a vast market for American goods. And of course, there’s the teensy fact that India’s looking to drop a few billion in arms contracts. So Obama shook hands, removed sanctions, pushed Boeing and dangled the UNSC carrot. Or at least, that’s what happened publicly.

And India welcomed Obama like a rock star, but not every Indian pundit was thrilled at the prospective visit, and not everything discussed was distributed to the media in press releases.

India thought Obama should have scolded Pakistan for failing to prevent regional terrorism. Indian media is nonplussed that the P-word didn’t come up during his memorial visit to Mumbai. This omission was perceived not only as a lack of sensitivity for regional politics, but as a practical issue as well. The US keeps throwing funds at a Pakistani military that has been accused of traditionally supported terrorism in India.

But India’s huge defense budget also makes Pakistan uneasy, and while America has always been a fair-weather friend to Pakistan, Obama knows that right now we need Pakistan strategically. When St Xavier’s peanut gallery chimed in, he refused to be baited.

There was a little speculation, but the world-wide fear of the Sleeping Dragon didn’t make enough headlines. The US operates under the potential threat of the world’s biggest army and the second biggest economy. We want the most powerful allies to be had in Asia, and India is bigger and wealthier than Pakistan.

So while Obama was hedging the American economy and safeguarding against China, influential Pakistanis, including former military leader Musharraf, were publicly denouncing Obama’s diplomatic chat as a targeted alienation of Pakistan. Of course, at the root of this—at the root of everything between Pakistan and India—is the Kashmir conflict. And my guess is, Kashmir is largely why Obama didn’t go to Pakistan.

The world compares Pakistan and India because the two countries obsessively compare themselves. In some ways it seems natural—after all, they used to be a single country. But are the Czech Republic and Slovakia constantly pitted against each other in this “us vs them” forum? Are the former Soviet Republics? Are Pakistan and Bangladesh, for that matter? No, because those countries don’t share a nuclear border, and those countries don’t have a Kashmir.

Obama wanted to make a point. India can be a world-player. India is bigger than Kashmir, and the sooner India realises it and quits obsessing, the sooner the nation can reach its full potential. It’s not about India versus Pakistan because India and Pakistan are different countries in very different situations. Maybe Kashmir was discussed behind closed doors, but if the world cares about Kashmir, it’s only because of the potential nuclear holocaust that could easily occur accidentally, even, because both countries have such a short early detection period—3 minutes or so compared to the US/USSR’s 35 minutes. So the bombs are constantly ready to go, like half-cocked, apocalyptic guns with safeties off.

And I think many Pakistanis and Indians share the world’s sentiments. As my friend Sanjeev Gajjella, 28 and a Mississippi State University doctoral student from Hyderabad, put it—“My generation doesn’t care much about these wars. All I want is a good education for my kids, a good family and good earnings. That’s why there is so much growth in India right now, everybody’s thinking like me. We don’t want to fight over Kashmir.”

I suspect that educated people from both countries wish that their governments would let Kashmiris handle themselves—maybe even govern themselves—and focus on more pressing internal affairs. What does Pakistan want with Kashmir? It can’t handle the undisputed territory that already falls under its jurisdiction. Pakistan should work on increasing its democratic and military credibility so that the world will invest, and Pakistan will become a stable place.

And can India take care of more people? Despite their economic boom, 42% of Indians still live in poverty and those figures are rising rather than falling. Nothing could be more damaging to India’s worldwide ambition than to continue to obsessively pour resources into a regional land dispute.

Reservations against US defense commitment to Pakistan

Finally, India doesn’t understand the US’s new defense commitment to Pakistan. And frankly, neither do many Americans. Throwing money at Pakistan’s military has never solved anything before—why do we expect it to solve anything now?

The Pakistani military has been played for nationalist thugs. In fact, for the right price, the Pakistani military is willing to be anyone’s thug. The US turned a blind eye on nuclear proliferation and terrorism in Kashmir, because we wanted Pakistan to fight the Soviets. We funded madrassas. We contributed greatly to Pakistan’s factional violence and the rise of radical fundamentalism. Pakistan didn’t get into its current situation alone, but it has to get out alone before the international community can truly be any help. Foreigners can build infrastructure, but they can’t reprogram the philosophy of a nation—both communism and Nazism proved that.

And Kashmir is only one reason the world distrusts the Pakistani military. Perhaps the biggest reason is that the military is always overthrowing civilian governments, and even when it’s not in power, controlling key civilian government decisions. Otherwise, why haven’t civilian leaders been able to undo the damage General Zia inflicted on the country’s constitution and legislation?

Back to Obama’s Asian tour—no matter what happened or what could have happened, no one is happy. Not Pakistan, not even India, and least of all, America. Americans want jobs, but they don’t relish the idea of huge defense contracts providing these jobs, and they hate the idea of arming powerful nations that aren’t currently fighting their proxy wars. Not to mention, America is fixated on the cost of this trip, and paranoid news sources have milked it, circulating the unfounded figure of $200 million a day.

The long and short of it is, this whole trip is political. Politics are necessary, but does anybody ever win?