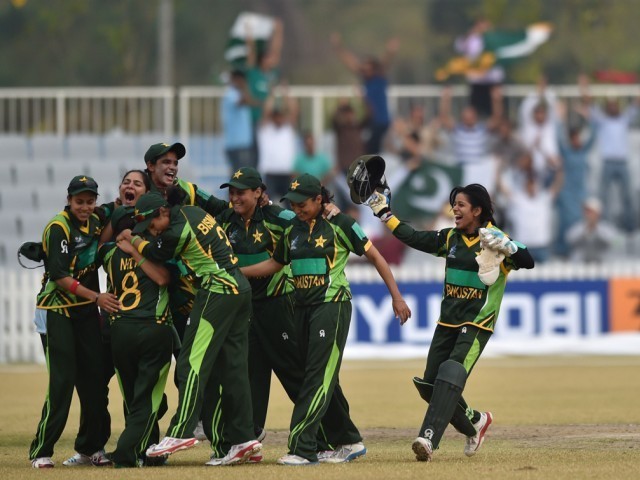 Pakistan women cricket team celebrate their victory during the women's cricket final against Bangladesh at the Yeonhui Cricket Ground during the 17th Asian Games in Incheon on September 26, 2014. PHOTO: AFP

Cricket is not merely a sport for Pakistanis, it is our nation’s passion. The game also serves as a uniting force for the country. How can Pakistani fans forget the countrywide celebrations when Pakistan lifted the World Cup back in 1992?

The 1992 World Cup overnight turned our cricket team into a bunch of national heroes. There are numerous cricketers who serve as role models for the youth to follow, regardless of whether they have won major tournaments or not. Saeed Anwar, Rashid Latif, Mohammad Yousuf, Shoaib Akhtar, Shahid Afridi, Younus Khan and many others were not a part of the World Cup winning squad, but they are still idealised.

However, there are some superstars who have never been in the limelight – our female cricketers. They have held Pakistan’s flag high on numerous occasions but are not accredited with due fame. The concept of women’s cricket was virtually non-existent until a determined woman decided enough is enough. The struggle to establish a well-rounded team finally gave way to a national women’s team. Now, Pakistan can boast about having a fantastic women’s cricket team comprising of players who fall in the top 20 International Cricket Council (ICC) rankings.

Following are five female cricketers who deserve recognition for their effort and contribution towards cricket.

Shaiza Khan is the one who introduced women’s cricket in Pakistan. She had no support from the government or from the board, all she had was a dream, which was to see Pakistani women represent their country on the biggest stage of cricket. Shaiza received her education from the University of Leeds and came back to Pakistan, with her younger sister Sharmeen, to initiate women’s cricket in her motherland.

The women’s cricket team at that time was solely funded by Shaiza’s father and Shaiza went on to invest her personal savings in the pursuit of achieving her dream. She inducted players in the team from all over the country through open trials. In a short span of about eight months, she was able to form a national team for Pakistan all by herself.

Pakistan needed to play at least three ODI matches outside the country to make their way into the 1997 Women’s World Cup. Shaiza succeeded in arranging a tour to New Zealand, again funded by her father. Pakistan put forth a poor performance in both the New Zealand tour and the World Cup.

However, when West Indies toured Pakistan in 2004, the girls shocked the world with their performance. There were some records set by Pakistani cricketers, one of which belonged to Shaiza. She took 13 wickets for 226 runs. Her score is yet to be beaten as she is still the best bowling figure in women’s cricket in a Test match.

Everyone knows of Brian Lara since he holds the world record for the highest individual score in a Test innings. But most people remain oblivious of Kiran Baluch. She scored 242 runs during an innings in Karachi against West Indies while they were touring Pakistan in 2004. She surpassed India’s Mithali Raj’s record of 214 and her name was penned down in the book of records.

Kiran batted for five long sessions against the experienced girls from the Caribbean. She was amongst the few female cricketers who made their way to the national squad through the open trials conducted by Shaiza.

Kiran, the daughter of a domestic cricketer, used to play with her father and younger brother on the roof and inside their house. It was her determination, self-belief and sheer talent that enabled her to dominate records.

On her way to make the highest individual score, she also made the highest opening partnership of 241 runs with Sajida Shah, who is the youngest female cricketer of all time. Sajida made her international debut at the age of 12 years.

Sana Mir is arguably one of the most successful captains of women’s cricket. The girls in green have done reasonably well under her captaincy. The improvement in their game is evident and Sana is one of the main forces behind it. Pakistan won a gold medal in the Asian Games 2010 in Guangzhou and successfully defended the title against Bangladesh in the Asian Games in 2014. According to this superb skipper, women’s cricket was not given enough attention in Pakistan before their 2010 Asian Games win.

“Winning the gold here will be a great boost for women sports and help in rapid development of women cricketers in Pakistan.”

Sana, the bowling all-rounder was included in the prestigious match which was played on the 200th anniversary at the Lord’s stadium, played between the Marylebone Cricket Club (MCC) and the Rest of the World (ROW). She played for the ROW and performed outstandingly well, taking four wickets for 36 runs in nine overs.

Javeria Khan‘s story in an inspirational one. She started off as an aspiring chartered accountant but started playing cricket as an off-spinner. She was reported for a suspect bowling action and was banned from bowling in international cricket events back in 2010.

Although her action was cleared recently, there was a point where Javeria felt that her cricket career is over. Javeria started focusing on batting as well and her hard work and determination paid off, making her one of the finest batswomen in Pakistan.

With an immense marked improvement in her skills with the bat, she now opens the innings and is also the second player for Pakistan to score a century in ODIs after Nain Abidi. But the girl has bigger dreams. According to her,

“My dream is to play a World Cup final for Pakistan and bring the cup home.”

Javeria Khan capped an impressive series performance with an unbeaten 47 in the last ODI.
Photo: AFP

She is definitely a bright prospect for Pakistan. Bismah is an exceptional player in both ODI and T20 format. The 23-year-old currently ranks 18th in the ODI batswomen ranking. However, her ranking does not justify her talent.

She is a committed left-handed batswoman with an average of 23.98 in ODIs and 25.71 in T20s. She has been one of the key players for Pakistan for the past three to four years. Bismah usually bats at the one-down position and looks to anchor the innings and keep the scoreboard ticking.

She is still young and has a long way to go in international cricket. Cricket pundits are impressed by this wonderful and talented young lady and believe that she will serve her country in the future with her splendour.

Bisma Maroof was declared the player of the match for her all-round performance.
Photo: ICC

The women mentioned above are just some of the very few inspiring female cricketers of Pakistan, because the actual list is quite long.

The women of our country are as talented as their male counterparts in almost every field of life. Unfortunately, they barely get rewarded for their feats. We should respect and appreciate their contribution, not only in the field of sports, but in every aspect of life. Pakistan’s women cricketers deserve the same sort support that Pakistani fans give to the male cricketers since they have immensely improved and are a source of pride for our nation.