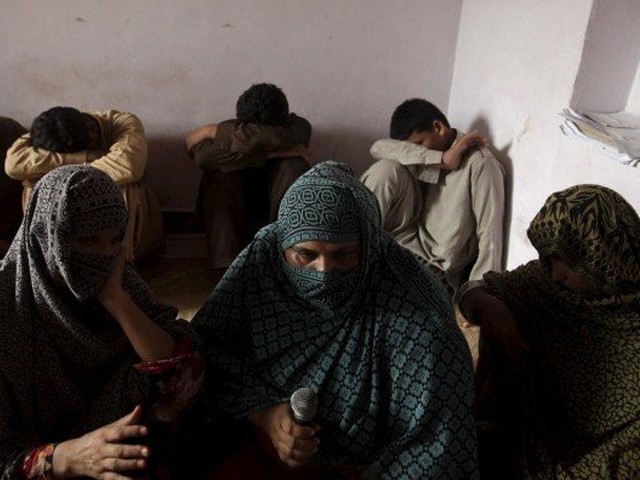 Children whose families say have been abused, hide their faces while their mothers are interviewed by a Reuters correspondent in village Husain Khan Wala of Punjab on August 9, 2015. PHOTO: REUTERS

Like a tiny flame still years away from growing into a full blown fire, a child is deeply vulnerable to strong winds. Due to this susceptibility, a child feels more intensely than adults do; raised voices from parents, the death of a pet, a seriously traumatic event, all become long-term fixtures on the portrait of a child’s mind.

Now imagine the repercussions of molestation on such an impressionable consciousness.

A child’s mind is like an open canvas gradually taking shape from the brushstrokes of life’s experiences. An event such as child molestation only leaves permanent dark splotches on the canvas. Through years of professional healing, a victim can paint over these ugly smears, but the marks can never truly go away.

How does a child feel after sexual assault?

It is the age of innocence, an age to grow, play, learn, and strengthen the mind to meet life’s challenges, and there is only so much a budding mind can endure. After such a traumatic violation of the body, a child’s mind is incapable of processing the wave of negative emotions; they can feel pain, confusion, disgust, and far worse.

Recent news of Pakistan’s biggest child abuse case in history has gripped the country. The story of nearly 300 children ranging from the ages of six to 14 repeatedly molested, gang raped, and forced into unthinkable acts with each other while filmed for hour-long videos so that their parents could be blackmailed, is one of the most horrific tales to come out of Pakistan.

Who is at fault?

Do we blame the incompetence of the police, who were unable to shut down this gang since 2006? For being so ridiculous as to arrest a 13-year-old boy for having sex with another child, when he was a victim himself?

Do we find fault with their corruption, considering how they tried to violently stifle the voices of 4,000 protestors, in the process injuring dozens, and for picking up villagers in the dark of the night, so as to scare them into keeping quiet? (Perhaps the police were worried about allegations of a five million rupee bribe surfacing, allegedly paid by political puppet masters.)

Or should we blame the parents, who tried to hide the wrongdoing by paying off the criminals, who were so ashamed that they forgot their children were merely victims?

What about the major political parties that shut down big cities on a whim but did nothing here? A party like Pakistan Tehreek-e-Insaaf (PTI) looking to score points in the National Assembly by making comparisons with the Peshawar school shooting, which were uncalled for?

Or the Pakistan Muslim League-Nawaz (PML-N), who have shamelessly tried to bury this horrific story six feet under? How about Rana Sanaullah, who has tried to pass off the incident as an innocuous side effect of a land grabbing battle between two groups? Does it matter, Mr Sanaullah, why the story came out when there is video evidence of children being raped? Do you not realise that children can’t give consent? Would you have reacted so flippantly had the victim been your own kin?

Or how about the Council of Islamic Ideology (CII) which ruled that girls as young as nine- years-old were eligible for marriage, but have remained silent here?

Why does this council exist? To only pass laws where grown men can marry young girls?

What of the tens of thousands who fill the streets when there is an offensive video on YouTube, or to show support for Salman Taseer’s murderer, do not bother to come out of their homes now? Where do the priorities of these people stand? How is this not worth demonstrating for?

Or perhaps we should start with ourselves. Our level of shame surrounding sex has reached toxic levels. The toxicity is such that cases of child molestation in the country are covered up each year by schools, authorities, and the parents themselves.

The first priority should be to help the children

There is plenty of time to catch the guilty; these children who have suffered from unimaginable trauma need immediate help. The government has to direct its resources to rally professional trauma counsellors across the nation to aid them.

But first, the government needs to display the right sensitivity. For once, it has to pretend to have an ounce of humanity.

The victims need professional help to process the trauma

During an interview for an article on child sex abuse, psychotherapist Saadia Parvez told me that victims are unable to make sense of what happened to them, and often end up blaming themselves,

“To admit a parent has failed [to protect them] destroys the world of a child.”

By accepting blame somehow they feel less powerless. What’s more is that because children don’t have a better understanding of their bodies, any positive sensations they feel during the molestation lead to feelings of guilt.

Unprocessed emotions from such a trauma can result in numerous psychological issues during adulthood. In fact, most child molesters were victims of sexual abuse themselves.

“When a child is being sexually abused, the body feels sensations, which on some level are natural. This creates a conflict with the repulsion the mind feels, and left unresolved, and can have victims grow up with a weird understanding of sexuality.

Often, when a paedophile who had been sexually abused himself is abusing a victim, they are on a subconscious level trying to recreate the tragedy that happened to them, to help make sense of their own childhood trauma. On some level, their mind is asking them ‘yaar, yeh mujhay kya hua hai?’ (What was it that happened to me?)”

Certainly, this case from Kasur is more complicated than an average child molestation case. The level of depravity is one of the worst in the history of the country, and the amount of psychological trauma on both the children and their parents is incalculable. The victims need aid from trained professionals who have experience in dealing with sexual trauma. It will be a long process, but it needs to begin for the sake of the children’s wellbeing.

It is the least we can do for them.