What Musharraf and Lady Gaga have in common 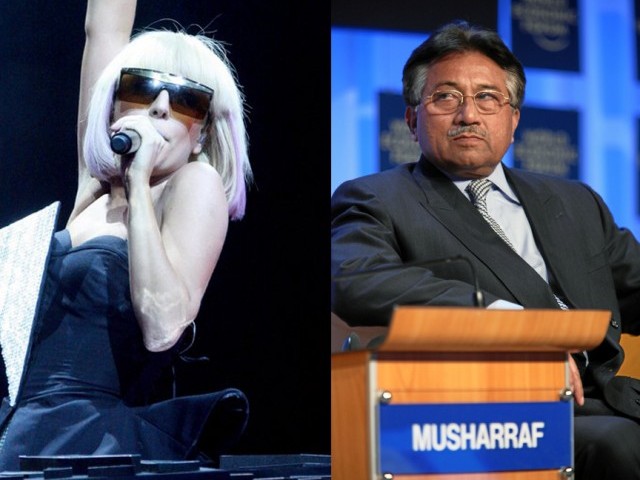 Musharraf is about 21 million fans short of Lady Gaga's fans base - no reason he can't run Pakistan.

Lady Gaga, Justin Bieber and General Pervez Musharraf have something unusual in common: They all have an enormous fan following on Facebook. Now for Gaga, who has 22 million fans, and Bieber, 15 million, that maybe an appropriate yardstick of popularity given that they are entertainers and the more they are watched, the higher are the record label sales.

In a recent interview with the BBC, former President Musharraf spoke about his political career’s resurrection, asserting vehemently that he is very popular in Pakistan. The assertion may be debatable but I wouldn’t write Musharraf off completely yet.

When asked how he gauged his popularity, much to my astonishment, Musharraf gleefully revealed, with an air of victorious arrogance:

Before I could let out a scream in utter disbelief, the host asked him in the most austere manner:

“You think you are popular in Pakistan and can launch a successful political party on the basis of the number of followers you have on a social networking website?”

“It is but one of the indicators. I have a comprehensive analysis of my popularity from various sources.”

Now, naturally one wonders if Mr Musharraf is so popular here in the country, how come he launched his political party in London and is promoting it in international forums in Dubai and New York. He says he is not afraid that his return to Pakistan will spark a plethora of corruption charges; in fact he is being cautious due to security concerns, possibly assassination. Yes sir, quite popular indeed.

His concluding remarks included that the youth of Pakistan, his 18 to 30 years old Facebook followers, need him to save the country. According to him 80 per cent of these Facebook followers are Pakistanis, then why is he catering to the 20 per cent who is not in Pakistan?

If Musharraf is seriously considering a political renaissance, he must find a way to connect with the people back home, whom he intends to play saviour to. He says he needs to create an atmosphere before coming here, I say one can only create or change an atmosphere by being present here to begin with.

If the General wants to convince people that he means business this time, he will have to take drastic measures. He will have to put his security concerns aside and come back and devise a strategy to win back the trust of his people who are in desperate need of change. That will be a good determinant of his popularity. Meanwhile, Justin Bieber has reached one billion ‘views’ on YouTube, and he’s not even that great.