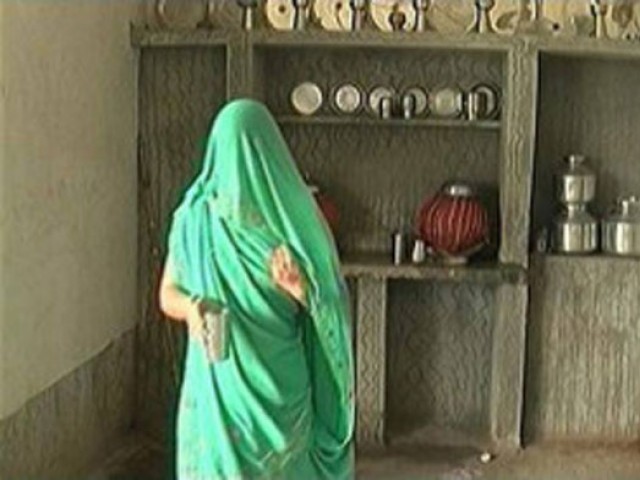 The rape victim was asked to balance a monstrous 40 kilogram rock on her head to prove her 'purity'. PHOTO: INDIA TODAY

August 2015 fell on South Asia’s shoulders as an overbearing weight and a massive shock – as preparations for Independence Day on both sides of the Pakistan-India border were underway.

Pakistan’s largest child abuse scandal surfaced, wherein some 400 children had been victims to the perverted fantasies of sexually depraved men. There has been much debate and dissent as to what the rationale behind rape is, and everyone pretty much knows what drives a rapist to rape. What is more important to note here is the nonchalance of the police force and the deformed laws that govern the heinous crime that rape is.

From across the border, another piece of news reached us regarding a rape victim in India who was required to provide irrefutable evidence of her ‘purity’. This proof was not a DNA testing, (not) astonishingly enough; rather the requisite was the rape victim balancing a monstrous 40 kilogram rock on her head.

Passing this sanctity test, the woman would be at leisure to continue her former life with her husband – failing it, I shudder to think what would follow. Supposed to be her ‘agnipariksha’ (ordeal), the test was mandatory so as to know if the woman’s tainted honour was at fault or not. Agnipariksha, from the Ramayana, was a test that even Sita had to go through as a post-abduction concept. If Goddesses could do it, shouldn’t women be able to do it too? Because at the end of the day, ‘pure’ women are born with unspoken superpowers that enable them to lift humongous loads on their heads.

This is no different from the laws that deal with rape in rural Pakistan, which demand a total of four male eyewitnesses (because four men would stand by watching a woman get raped, right?) and when not provided the aforesaid, women are accused of adultery.

In short, rape victim or no rape victim, the woman has to be, somehow, at fault – for if this were not the preconceived notion, requirements such as an agnipariksha or four witnesses would not have existed. So how far exactly has religious fundamentalism in both countries gone? And is there any stopping it?

And then there is the big question mark on the credibility of the forces that are supposed to be concerned with law enforcement. It is one thing for a religiously extremist court to announce absurdities, it is totally another for the police force to not stop such barbarity. It was also in August that the Mumbai police raided a hotel, arresting 40 couples for indecent ‘public’ behaviour, while at the same time, the Delhi police refused to lodge a complaint against a man who tried to molest a girl in broad daylight. In July, a 14-year-old girl in Gujrat was denied abortion after she became pregnant from being raped.

There are countless other stories that could be put in black and white – stories that showcase the excellent crackdown of the pot-bellied police forces. While Bollywood blockbusters depict their policemen under personas of Singham, Chulbul Panday, Radhe, Rowdy Rathore, etc, reality seems far, far blurred in comparison. Reality is, in fact, so blurred and distant from the false glamour of Bollywood policemen that one cannot wonder where Bollywood gets ideas from – are there any Singhams and Chulbul Pandays in real life?

One is also led to wonder if the police force is so incompetent and devoid of their sense of duty, why are they glorified to extreme and insane levels?

In no way criticising, rather calling attention to a fundamental flaw, while India soars the skies of Silicon Valley (having produced CEOs for Microsoft and Google lately), it continues to fail its women. Not having moved on from December 2012, it is still stuck in a limbo with regards to rape and its due punishment. Why is it that consenting adults are arrested from a hotel for ‘public’ indecency while molestation in broad daylight is not considered a crime enough to lodge a complaint?

And so as both countries gleefully celebrate their independence, I end this rant with just this, how free and independent are women and children on both sides of the border – and whose job is it to keep them safe? Where is the police force? Where are the Singhams, Rathores and Pandays?