You can be an atheist, but not on social media and not on your terms 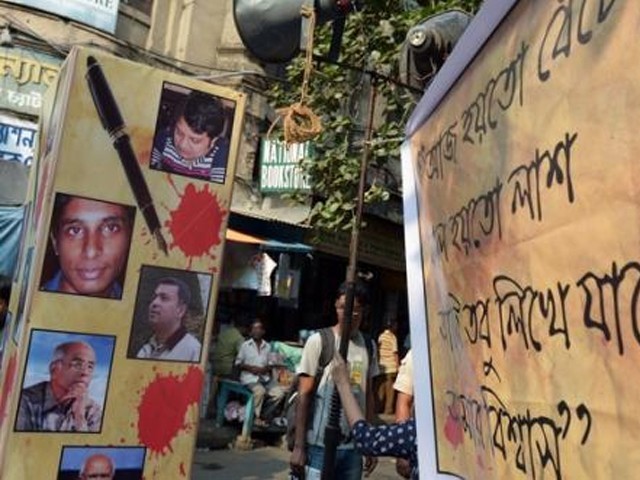 A protest against the killing of Bangladeshi bloggers earlier this year. PHOTO: AFP

Niloy Neel is the “fourth blogger” to be killed in Bangladesh in less than six months. It is now officially convenient to get by with assigning serial numbers to dead atheists, rather than making the effort of memorising their names.

In 2013, radical religious groups drew up a list of 84 atheist bloggers, and submitted it to Bangladesh’s interior ministry demanding them to be unconditionally punished. The list was widely circulated, and so far, four of them have been murdered by extremist outfits.

Those who live, do so in constant fear. The police laid bare its antipathy for them when Inspector General Shahidul Haque victim-blamed the atheists for being vocal about their religious views, thus bringing death upon themselves.

It is a circumstance prominent Shia, Ahmadi and Christian families of Pakistan may comprehend better than I do.

Regrettably, minority rights activist who regularly dole out sympathy for the aforementioned minorities (as they should), are tellingly dormant on the issue of anti-atheist bigotry prevalent across the world.

Atheists are stereotyped as angry, abusive, nihilistic, spiritually-moribund people. The word ‘godless’ itself is commonly used as an epithet. Non-religious people, or ‘nones’, are generally smeared as immoral people. It is a hypothesis that has been categorically rubbished by scientific studies, as well as by statistics measuring the social stability of countries dominated by non-religious citizens, like Sweden and New Zealand.

Yet, being an atheist is a punishable offense in 13 countries around the world, all of which happen to be Muslim-majority states. In Indonesia, Alexander Aan was famously imprisoned in 2012 for declaring himself an atheist on Facebook.

As an exercise in empathy, imagine the justified outrage of watching a Muslim man ending up in an American penitentiary on charges of,

“Calling others to embrace Islam.”

Not to be outdone, Saudi Arabia squarely equates disbelief in God with terrorism.

In the United States, Pew Poll indicates that atheists are nearly tied with Muslims as the most disliked religious minority in the country. Seven American states technically bar atheists from holding public office, and some 40 per cent of Americans claim they would not vote for a qualified presidential candidate who is an atheist.  George Bush Senior reportedly told an interviewer that he considers atheists,

“Neither citizens, nor patriots.”

Under these demonstrably hostile circumstances, why is it that hate crimes against atheists aren’t as seemingly common as those against other marginalised groups like Hazaras in Pakistan?

Atheists blend well in the general secular environment of a country. They are not identifiable through special headgear, unique styles of clothing or facial hair, anatomical features, places of worship, or rituals. Their distinguishability is a cherished trait, given a history marked by inquisitorial raids, and wide scale lynching or banishing of heretics in nearly all cultures.

However, do not mistake the public’s lack of opportunity to exhibit bigotry, as the absence of bigotry itself. When atheists do voluntarily come out and publicly profess their lack of belief, as the Bangladeshi bloggers did, what happens to them is not encouraging.

We convince ourselves of our ‘goodness’ through a token headshake upon news of a hate crime against minority members; as if being ‘anti-murder’ is all it takes to qualify as a decent person.

Moreover, to remain staunchly anti-murder, we demand that these minorities continue pretending to be who we want them to be. Sure, be an atheist, but don’t preach, don’t criticise, don’t scrutinise the system, and quietly get back in line like all the other ‘good atheists’ fearfully conforming to the order. Otherwise, your persecution would be on your own hands, and we would refuse to feel sorry for it.

Mainstream activists are often reluctant to stand up for atheists for the fear of being labelled ‘one of them’, which limns the intensity of prejudice out there. God knows, we wouldn’t want our name on a ‘list’ among those 84, now 80, death-marked heathens.

Whatever the cause, fellow liberals, your silence on this matter has been duly noted.