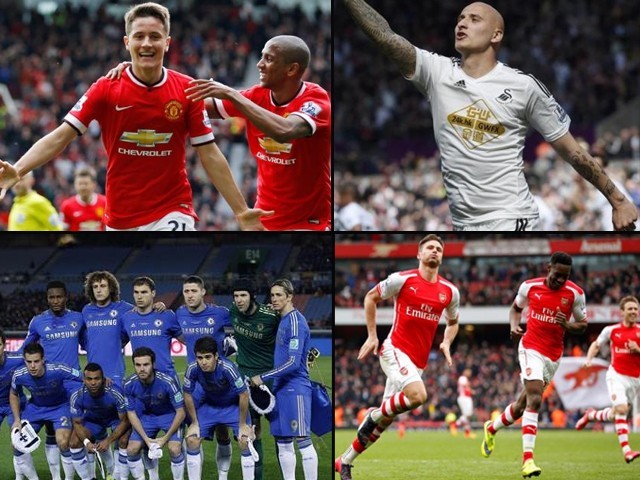 For all the lovers of English football, the wait is finally over. English Premiere League is back. PHOTO: REUTERS

For lovers and fans of English football, the wait is finally over. The English Premiere League (EPL) is back. With millions of pounds already being spent on new recruits by every club, this promises to be another season full of twists and turns. Now would be the right time to look into the crystal ball and predict how the season is going to unfold over the next nine months or so.

Of all the promoted teams, Watford is most likely to get straight back down in the championship. They have brought in too many new faces in the club who will take time to gel in together, and unfortunately for them, the unforgiving nature of the Premiere League doesn’t allow the luxury of settling.

It was a very strange decision by Leicester to sack their manager Nigel Pearson after his heroics from last season. They brought in Claudio Ranieri to replace him and the Italian tinkerman will cost the Foxes their Premiere League status.

The Sunderland squad, who are currently lacking quality, will find it extremely difficult to stay in the Premiere League. There will be many broken hearts at the Stadium of Light at the end of this season.

Norwich has developed the image of a yo-yo club over the years. They will be sucked in the relegation dogfight again this season, but under the dynamic leadership of their young manager, Alex Neil, they will just end up on the right side of the table.

With his first full season in charge at the club, Tim Sherwood will be looking to make a strong impression. The fact that Aston Villa lost their club captain Fabian Delph and main striker Christian Benteke in the summer isn’t helping their case either. Still, with the amount of quality left in the squad, they will comfortably beat the drop.

There was a time when the Baggies would constantly be worried about the fear of relegation. Tony Pulis has come and steadied the unstable ship at West Brom, so they will finish well above the safety zone this time around.

This season will see the return of Steve McClaren in the Premiere League, where he will lead his side, Newcastle. A club of such huge stature has failed to live up to its potential in the previous years. Club owner, Mike Ashley has pumped up some cash in the club, but even with this investment, it will be extremely difficult for the Toons to break into the top half of the table.

Swansea hasn’t been able to replace their star player from last season, Wilfried Bony, since his departure in January. They will struggle to score goals, which will not help them higher up in the table.

A volatile new manager, Slaven Bilic has taken over the helm at West Ham. The owners have backed him with a huge transfer kitty, though he will take his time to adjust to the style of the Premiere League.

Alan Pardew has worked wonders at Palace since taking over last season. The Eagles don’t need to worry about relegation anymore and they can look forward to a solid mid-table finish.

Gone are the days when Everton was a consistent feature in the top six sides of the league. Last season, the Toffees finished in the bottom half of the table. The expectations have lowered significantly at Goodison Park and a top half finish will be considered as a good return.

This summer saw the Saints losing two of their key players in the form of Morgan Schneiderlin and Nathaniel Clyne, but their manager, Ronald Koeman, has done well to replace the departed stars and will steer his side to a top 10 finish.

Mark Hughes has done a remarkable job with Stoke. He has moulded his side in his own traditional style and the Potters are now very hard to beat. They could be this season’s surprise package and end up with a very high finish in the league table.

The Spurs have high ambitions and their chairman, Daniel Levy, wants to see them playing in the Champions League. But realistically speaking, they are far off from breaking the monopoly of the big clubs.

Manchester United has made some stellar signings in this transfer window, most notably, Bastian Schweinsteiger. Signing quality players is one thing, but adjusting them in your team is completely another. This time, Louis Van Gaal hasn’t been doing very well, so I don’t see the Red Devils making it to the top four in this campaign.

Brendan Rodger’s side might just sneak through in the top four at the expense of their old rivals, Manchester United. After losing Sterling to Manchester City, the Liverpool manager dipped straight into the transfer market and landed players like Christian Benteke and Roberto Firmino. Benteke’s signing could prove to be the difference, because the Belgian forward guarantees one thing and that is scoring goals, which is crucial for any side.

Manchester City has bolstered their squad with the signing of Raheem Sterling from Liverpool. Now Manuel Pellegrini is under immense pressure to deliver the Premiere League title. Players like Vincent Kompany and Yaya Toure are struggling to recapture the brilliance that they had shown in the past, therefore I feel another disappointing season lies ahead for Manchester City and their Chilean Manager Pellegrini.

Arsenal was the most consistent side in the second half of last season; they displayed true championship form since the beginning of the year. The arrival of Petr Cech has given them the much needed assurance and stability as well. However, they still lack a lethal centre-forward. They come close in comparison to Chelsea, but I am afraid a second place finish is the best that they can achieve with their current squad.

The Blues were the runaway winners last time, and it looks extremely difficult to stop them this time around as well. Jose Mourinho’s shrewd tactics and strong resilience of their squad makes them an extremely tough unit to beat. Their only worry is the fitness of their hit man, Diego Costa. If they can somehow keep him fit, then you can very well hand them the title before it even begins.