Of misogynistic jihadists and their sexual jihad 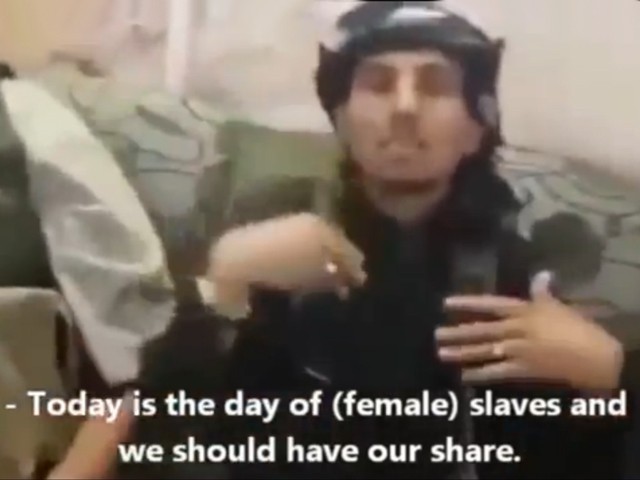 The group demanded that people handover their unmarried daughters for their fighters. PHOTO: SCREENSHOT

Whether it’s the destruction of holy shrines, burning of hostages, stoning the accused and sexually assaulting girls, the Islamic State of Iraq and Syria (ISIS) has managed to set new boundaries and records of violence. Adding to their records is the recent execution of 19 girls in Mosul who refused to have sex with the group’s fighters. This is an extension of the sheer brutality that is normally attributed to them.

Countless women have been abducted by the ISIS militants. The prettiest of the abducted virgins are then sent to the markets of Syria and Iraq where they are sold as sexual objects to the highest bidder, amongst the beasts salivating to get the best of the prey.

When the ISIS took over the city of Mosul, the group demanded that people handover their unmarried daughters for their fighters:

“We call upon the people of this county to bring their unmarried girls so they can fulfil their duty in sex jihad for their warrior brothers in the city and anyone who will not appear will feel the full force of the Shariah law upon him.”

These men are not Norsemen raiding other lands, plundering and enslaving women. They’re not even those savage tribes of Caucasian steppes invading peaceful cities, and this is not even the fictitious story of the Game of Thrones, famous for showing disturbing and explicit scenes and events, but the similarity is striking. This is reminiscent of medieval men possessing the arms of the 21st century.

Sexual jihad, as they call it, is the alleged volunteering of women to provide sexual comfort to the men fighting for the establishment of the Islamic rule. The term is, without a doubt, a slander against the Islamic teachings and greatly distorts the meaning of the word jihad. The issue came up when Tunisian women, who supported the jihadi movement, volunteered for the jihadists in Tunisia and Syria. The ISIS incorporated this concept and legalised it in their self-proclaimed state.

But I disagree. Sexual jihad isn’t the volunteering of a woman with her own consent but is a forceful conduct as was the case with those unfortunate 19 girls. It isn’t a choice. The ISIS has even published a sickening guide to capture, punish and enslave non-believing women, outlining how to use them as sex slaves while also justifying child rape.

These jihadists are cold-blooded, sectarian, patriarchal, and mass murdering pedophiles who know nothing of the religious scripture. Their continued treatment towards women is a reflection of their mind-set. To them, women are nothing but objects or meat to gratify men, the powerful gender. A woman who denies presenting herself for this purpose is legitimate to undergo brutal punishment, which includes beheading, stoning, flogging and crucifixion. It will not be overstatement to state that women are treated as cattle. Even those young girls who have not reached puberty have been reported to be raped, as was the case with the nine-year-old who became pregnant after 10 ISIS militants raped her. This is an outright violation of the Islamic conduct and respect the religion tries to advocate for the female gender.

Women who belong to the Yazidi ethnicity have also been a victim to ISIS’s ways. The so-called jihadists have been reported to have conducted widespread, organised and systematic sexual assault against these women. The girls who’ve gone through their oppressive assaults and managed to escape have narrated disturbing stories of what those animals would do to them.

“However hard I screamed, yelled and cried there was no one to help us. When he raped me, he told me ‘you are slaves, you are our slaves of war’. I used to think I would rather be dead than living through this,” said 16-year-old Munira.

“He opened the door and allowed the six guards into the room. He told the six guards to rape me. All of them, all kinds of ways, everything. I was made to do disgusting things. For two whole days, I couldn’t move any part of my body,” said 22-year-old Noor.

What kind of Shariah law are they trying to impose upon women? As far as I know, their version of the law is in reality dissuaded in Islam. It is astonishing to see the contrast between the actual teachings of Islam and the ways of ISIS.

In a society where infant girls were buried alive, where men could share their wives and where women were not provided with inheritance, the Prophet (PBUH) stood up for them and blatantly advocated for their rights. People would mock and insult him for his seemingly naive idea of equating women to men. He forbade all his companions to hurt a woman during battle and in his last sermon, he willed separately for women. If one were to delve deeper, the Prophet (PBUH) has even warned the world of the ISIS.

The group claims to be following the true path of Islam, but I wonder, which religion is the ISIS really following? Since it’s evidently not the one that teaches peace, equality and compassion.

ISIS’s radical, twisted, and misogynistic mind-set has caused me to believe that the al Qaeda and the Taliban, with all their brutality and vandalism, were a whole lot merciful.

An A-levels student and an active social commentator. He dabbles in debate competitions, blog writings and sports. He blogs at www.fazalgilani.com and tweets as @ATNaqvi (twitter.com/ATNaqvi)

How Islamic is the ISIS?