In defence of the army: The question of prisoners of war 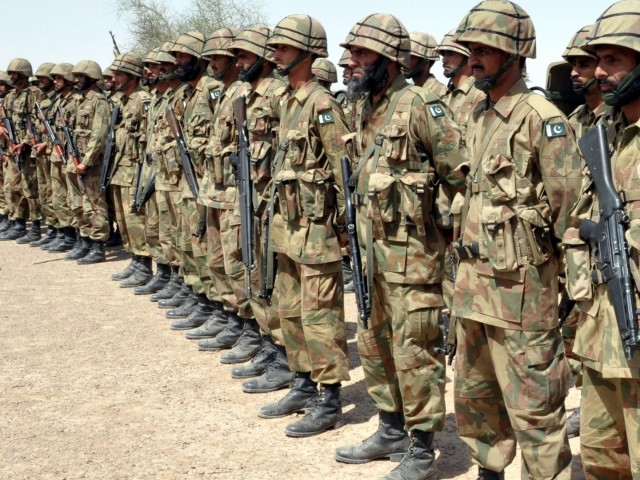 Is it justified to doubt the army which has offered great sacrifices in battle?

Militants usually do not comply with customs of war. They  strike civilians and thus render themselves undeserving of traditional reprieve.

In the war on terror, the US government promptly refused to regard captured al Qaeda and Taliban militants as Prisoners of War and instead labelled them as ‘unlawful combatants’ at the very onset of the long-winding war on terror.

Historic precedent hints that ruthless terrorists are like pirates captured on the high-seas. David Neuendorf of the Indiana Journal-Press once contended that:

“Such people were subjected to military justice, administered by military commanders on the scene. That usually meant hanging from a yardarm. Today it could mean a firing squad.”

In Pakistan, this is not an outrageous thought keeping in mind the terrorists ability to reorganise and strike another day.

So, how should captured militants in Pakistan be treated?

The question came up recently after a video showing a military firing-squad executing six men sparked uproar. The video obviously wasn’t filmed during a peacetime drill or inside a prisoner-of-war (POW) camp. Is it justified to doubt the army which has offered great sacrifices in battle and instead give militants the benefit of doubt, presuming militants captured by troops (following an ambush or fierce battle) as innocent civilians just because they wore plain shalwar kameez (with no ammunition vests)?

Disturbingly, the army’s tactics are judged on the battlefied by civilian standards which displays a lack of understanding of the intensity and nature of the conflict. Under the sway of a sensationalist media, the civilian segment of society has been overwhelmed by the idea of fighting militancy. The army now fights on – largely without the support of their nation.

Coming from simple urban lives, civilians cannot appreciate battlefield tactics. Despite the fact that thousands of lives have been lost at the hands of the terrorists, impressionable members of the public end up sympathising with militants.

At the beginning of the Operation Rah-e-Rast in 2009, news channels oblivious of ground realities continued airing footage of enemy casualties out of a pompous sense of impartiality. It wasn’t until flag-draped coffins began to arrive every day that the army/ISPR finally earned some airtime and the gullible nation eventually grasped the grim situation and chose a side.

Morality in the battlefield

Perhaps if a battle scene was played in slow motion, every shot causing the death of an enemy combatant would appear as an isolated act of brutal murder. An army fighting a war against terrorists cannot afford sensationalist media coverage that exploits naïve public sentiments, swaying popular opinion and leading to political and judicial actors overstepping their mandate and interfering in military matters, risking the security and morale of the troops in the process.

A ‘battlefield’ is commonly taken to mean territory falling between two opposing sides. The core difference between the war on terror and our nation’s earlier wars under black-outs, air-raid sirens and dog-fights wherein the public cheered bo-kaata, is that with the looming threat of attacks anywhere, anytime and no formal demarcation, the battle never ends for soldiers serving in volatile areas, who have seen countless comrades (as well as civilians) brutally killed at the hands of militants.

Under such ‘kill-or-get-killed’ circumstances and ceaseless engagement with militants who rely most on hit-run tactics, everyday is a battle and everywhere is the battlefield. Local army commanders entrusted with the responsibility of guarding the lives of their subordinates and ensuring the safety of other units/convoys have the right to decide when they must act on aggressive survival instinct to incapacitate militants apprehended during a battle, and when troops can enjoy peaceful partridge shoots.

A finance and audit professional with an interest in military affairs and socio-political issues. He contributes to several publications and has served on the editorial teams of two lifestyle magazines.

Justice comes to he who waits (not)